9-Nov-2017 8:05 AM EST, by University of Florida Institute of Food and Agricultural Sciences
favorite_border 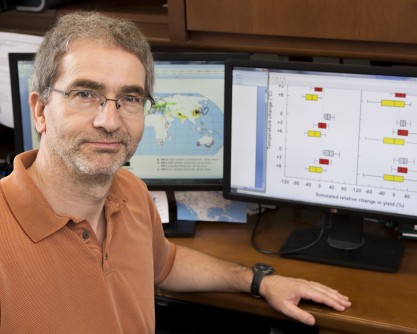 Newswise — GAINESVILLE, Fla. --- A University of Florida professor known for his work in using computer models to predict crop yields has been named to a newly formed global leadership panel for the Agricultural Model Intercomparison and Improvement Program, also known as AgMIP.

AgMIP brings together agricultural scientists from around the world to research climate change impacts and adaptation options.

Senthold Asseng, a UF/IFAS professor of agricultural and biological engineering, was named to the executive committee last week. He has contributed to AgMIP in many ways, according to a news release from AgMIP.

“AgMIP is one of the largest international agricultural research programs in the world with over 900 scientists,” Asseng said. “Being named to this executive committee is a huge recognition for me and of my scientific research and contribution to this program.”

In September 2016, Asseng led a study that showed scientists are closer to helping producers better meet global food demand. That finding is based on research in which they combined simulation and statistical methods to help them predict how temperature affects wheat crops worldwide.

In a study published in August, Asseng and his team of scientists found that with each degree of Celsius that the Earth warms, humans stand to lose more wheat, rice, maize and soybeans over the next 30 years.

With his committee assignment, Asseng said he hopes to further advance AgMIP.

In recognizing Asseng’s contributions to the group, AgMIP leaders said he has worked as a co-leader of the AgMIP wheat team, and he has helped lead the American-based and internationally organized research projects. His work also has helped set the standard for AgMIP crop model comparisons.

Additionally, Asseng is committed to expanding the AgMIP network for the improvement of research, AgMIP organizers said.

Also on the executive committee are: