UF Studies Show What Some Bugs Do for Love, Like Sacrificing a Leg

20-Dec-2017 8:05 AM EST, by University of Florida Institute of Food and Agricultural Sciences 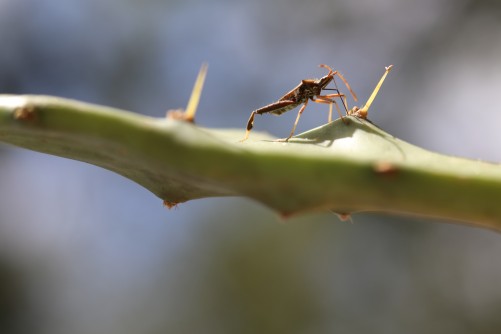 As an example, deer develop antlers, which help them compete with other male deer for female attention and to survive battles with predators in the wild kingdom. Now, with new UF/IFAS research, scientists know that a couple of bug species can lose a hind leg. In return, they grow larger testes.

“While interesting by itself, it more importantly shows scientists the tradeoffs that can exist across body parts,” said Christine Miller, a UF/IFAS associate professor of entomology and co-author of both new studies. “It also provides fundamental knowledge on the ways that animals can compensate after injury.”

Joseph and his team gathered cactus bugs near Live Oak, Florida. Somjee looked at the sacrifices made by crusader bugs collected near Perth, Australia -- places on opposite sides of the globe. Both researchers found that as the bugs lost their hind legs, they later grew larger testes.

“These bugs use their hind legs to fight for females, and thus the legs are critical for gaining mating opportunities,” Joseph said. “However, males may lose these legs in the wild; for example, when they’re trapped, or a predator catches them by these limbs. If that happens, we would assume they wouldn’t leave behind as many offspring because they can’t mate with many females.”

But because they grow larger testes, they can produce more baby bugs, Joseph said.

“That’s better from an evolutionary perspective. Insects that can compensate by growing larger testes can pass on their genes,” he said.