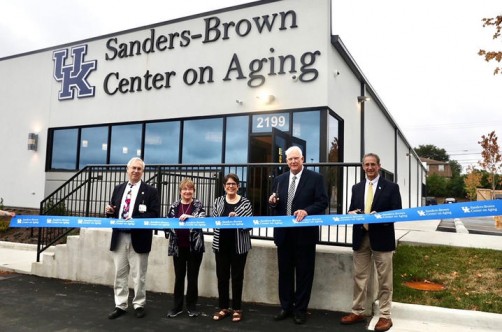 The world looks to The University of Kentucky’s Sanders-Brown Center on Aging for answers to the mysteries of dementia, and the elderly rely on them for help in charting their path to a healthy and vigorous senior lifestyle. After outgrowing their old space, leaders at UK decided it was time that Sanders-Brown’s home for clinical research and patient care reflects their reputation — building them a new home on UK HealthCare’s Turfland Campus.

The expanded Sanders-Brown Memory Clinic ensures that important work continues. The research team welcomed the first participant into their new home on Dec. 20, 2021. Now, UK’s Memory Disorders Clinic (formerly housed in the Kentucky Neuroscience Institute space inside Kentucky Clinic) has also moved into the new Turfland facility. The new facility provides a seamless, less stressful experience for a fragile population. It is essentially a one-stop shop for memory care and support.

“With the opening of the new Sanders-Brown clinical research facility at Turfland, it made sense for us to relocate our clinical care services to that location,” said Larry Goldstein, M.D., Ruth Louise Works Endowed Professor and chairman of UK College of Medicine’s Department of Neurology. “Many of our Memory Disorders patients also participate in our research programs, and our specialists work across the two areas. The move will simplify access for our patients and improve the efficiency of our providers.”

At 15,000 square feet, the new Sanders-Brown space more than doubles the capacity to serve patients and research volunteers. The increased room and updated technology have many other benefits including:

“UK is focused on solving the health problems of Kentuckians and beyond. That is exactly what is being done by the research team at Sanders-Brown,” said Mark F. Newman, M.D., UK executive vice president for health affairs. “Thanks to them, we should be proud of the fact that the Bluegrass State is home to many of the leading researchers and physicians found anywhere in the world regarding aging and brain health.”

Sanders-Brown has been around for nearly half a century. In that time, they have built an international reputation for best-in-class research into a disease that kills more people every year than breast and prostate cancer combined. At the same time, they have brought understanding of dementia home to Kentucky, arming thousands with the tools and information they need to age gracefully.

“We are the envy of Alzheimer’s research centers around the country for our leadership in the fight against dementia, including one of the largest groups of research volunteers who have agreed to be followed for their lifetimes and donate their brains upon their death, providing valuable longitudinal data that could unravel the mystery of how this disease develops — the first step toward a cure,” said Linda Van Eldik, Ph.D., Sanders-Brown director and Dr. E. Vernon Smith and Eloise C. Smith Alzheimer's Research Endowed Chair.

The Sanders-Brown Memory Clinic is the place where their research intersects with patient care. Leaders say this expanded clinic space is truly critical to their mission of advancing both research and patient care. “Our new clinic allows us for the first time to truly integrate clinical care with our many beneficial research programs that can support brain health and the discovery of new ways to prevent Alzheimer’s and related disorders. We also can provide more comprehensive care and family support, all while giving our patients access to cutting-edge experimental medicines that they deserve as part of their clinical care at UK HealthCare,” said Greg Jicha, M.D., Ph.D., director of clinical trials at Sanders-Brown.

Sanders-Brown has offered 42 clinical trials in prevention and treatment of dementia since 2015. The new facility allows the addition of at least 11 more clinical trials involving 625 additional participants, and it will speed up the transition from discovery to patient care. Additionally, the new clinic will greatly improve the competitiveness of the UK Alzheimer’s Disease Center, which Sanders-Brown directs, to compete for rapidly expanding federal research funding on aging.

Ultimately, Van Eldik says Sanders-Brown is much more than just a research center.

There are about 75,000 Kentuckians who are 65 and older living with Alzheimer’s disease. Nationally, nearly six million Americans are living with the disease, and that number is expected to rise to nearly 14 million by 2050. Leaders at Sanders-Brown say when looking at those statistics and facts regarding Alzheimer’s, they are confident this project will make a difference for many for years to come.

“I want to give special thanks to the many people and groups who gave of their time and effort to make the new Sanders-Brown Turfland Clinic a reality,” said Van Eldik. “I am also especially grateful for the generous financial support from President Eli Capilouto’s office, the Vice President for Research, UK HealthCare, UK College of Medicine, Sanders-Brown Center on Aging Philanthropy Council and the Commonwealth of Kentucky.”

KNI Medical Director Daniel Lee, M.D., says because the team at UK has been entrusted with referrals from across the United States, being able to consolidate various services for their patients is a huge benefit of this move.

“With the additional space at Turfland, it will allow us to provide multidisciplinary services such as social workers and neuropsychologists, in addition to clinical care,” he said. “Since many seeking treatments have traveled long distances, this would allow care to be seamlessly coordinated for them from the time they stepped foot in the new Sanders-Brown Clinic.”

The University of Kentucky initiated its aging program in 1963. With a grant from the Eleanor and John Y. Brown Jr. Foundation in 1972, the construction of the current Sanders-Brown Research Building was begun and, with additional funding from the state, a program in biomedical research was implemented. In 1979, under the direction of the late William Markesbery, M.D., Sanders-Brown emerged as a national leader in efforts to improve the quality of life for the elderly through research and education. Sanders-Brown’s major areas of focus are normal brain aging, Alzheimer’s disease and related dementias, and risk factors associated with these diseases.