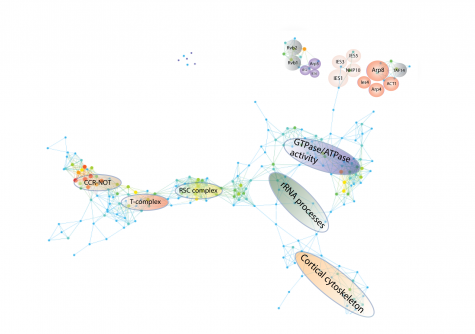 Newswise — KANSAS CITY, MO — Proteins, those basic components of cells and tissues, carry out many biological functions by working with partners in networks. The dynamic nature of these networks – where proteins interact with different partners at different times and in different cellular environments – can present a challenge to scientists who study them. However, researchers at the Stowers Institute for Medical Research have applied a mathematical method to large proteomics data sets to uncover new insight into the organization of complicated and dynamic networks.

In a new article, published in the Nature Publishing Group’s Scientific Reports, the biological networks of two proteins, INO80 in the yeast S. cerevisiae and Sin3 in a human cell line, were studied using an advanced mathematical approach called topological data analysis (TDA), which is a general method for analyzing highly multi-dimensional data sets. Compared to other methods used for analyzing protein interaction data, TDA allows researchers to assess a larger number of proteins and their connections and obtain an expanded view of the network.

“Think of a protein as an airport in a hub and spoke system,” says Mihaela Sardiu, Ph.D., first author of the article and a senior proteomics specialist in the Stowers Proteomics Center. “The system works one way in its regular state. But what happens when a snow storm shuts down a major hub? A portion of the network is affected.”

When the airport network is disrupted, how do the traffic patterns change? Do passengers choose to wait, take another route, or rent a car and drive to their destination?

“It’s similar with proteins,” Sardiu explains. “A change in one part of the network impacts not just that component but surrounding ones, too.”

For the INO80 network study, the researchers isolated protein complexes after genes encoding components of the INO80 chromatin remodeling complex were deleted from the genome. In the Sin3 network study, they reanalyzed prior data demonstrating the disruption of the human Sin3 network with a histone deacetylase inhibitor associated with anticancer activity.

Identification of TNMs can be applied to the study of diseases like cancer, where protein interaction networks become altered by chemotherapy or by the disease itself. By understanding the proteins, their neighborhoods, and their travels, researchers hope to gain insight into a wide range of biological functions, including drug resistance and the effect of cancer mutations.

“TDA is a fast and efficient way to interpret complicated data sets,” says Michael P. Washburn, Ph.D., director of proteomics at the Stowers Institute and professor in the Department of Pathology & Laboratory Medicine at the University of Kansas Medical Center. “There’s very little data out there on disrupted or perturbed protein interaction networks. Most of the focus has been on static networks. By perturbing a system, you can learn how it works as a dynamic network. This approach can provide an accessible route to visualize relationships between proteins.”

Proteins play important roles in cells and tissues. Some proteins provide structural integrity, others catalyze reactions, and yet others regulate gene expression. Proteomics is the study of the structure, function, and interaction of all the proteins in a cell or organism, which can number in the hundreds of thousands or millions of variations.

To better understand proteins in their dynamic world, Michael Washburn, Ph.D., Mihaela Sardiu, Ph.D., and their collaborators at the Stowers Institute for Medical Research used an advanced mathematical approach called topological data analysis (TDA) to study two different kinds of proteins and their interaction networks. The researchers changed, or perturbed, parts of these two protein networks and then determined how the networks were affected. Using TDA, groups of proteins exhibiting similar effects and sharing similar properties were identified as topological network modules. Additionally, the researchers were able to obtain an expanded view of cascading interactions across the larger network and identify new areas of biological networks to explore.