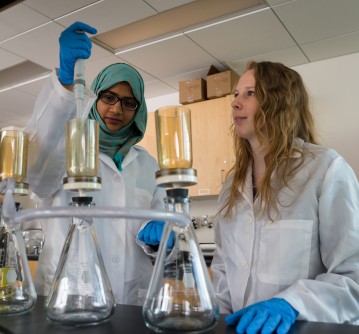 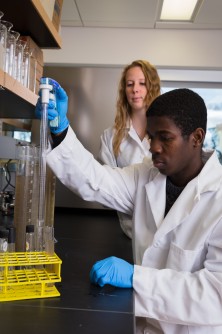 Water resource engineer Rachel McDaniel of South Dakota State University oversees the work of master’s student Louis Amegbletor as he measures water samples collected every 30 minutes in five-hour time span during a rainstorm to track how much E. coli sinks to the bottom and how much floats downstream. 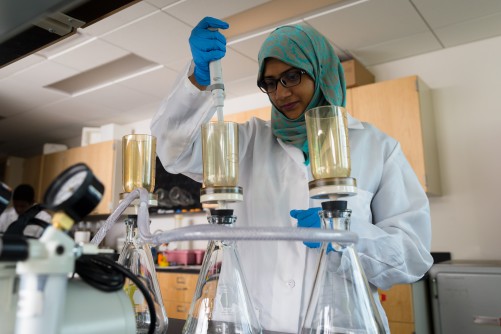 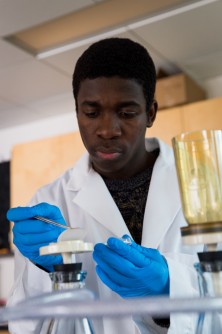 Graduate student Louis Amegbletor removes a filter that collects bacteria. He will then culture the bacteria to determine E. coli levels in water samples gathered during a rainstorm at Skunk Creek.

Bacteria levels in many streams are too high.

Newswise — That’s why assistant professor Rachel McDaniel, a water resource engineer in the Department of Agricultural and Biosystems Engineering, and professor Bruce Bleakley of the Department of Biology and Microbiology at South Dakota State University are studying the behavior of E. coli in sediment and in moving water at Skunk Creek.

This impaired creek, which runs from Brandt Lake southeast of Madison, South Dakota, and flows into the Big Sioux River, is one of the sites targeted through the 2013 National Water Quality Initiative. Though management policies have been adapted to keep domestic animals out of the creek during the recreation season—May through October—and to create buffer zones, spikes in bacteria levels are still causing concern.

“We are quantifying the E. coli in the sediment and determining the potential for sediment to contribute E. coli to the water column,” McDaniel explained. What they learn about E. coli behavior can help natural resource managers determine what else can be done to improve stream and river water quality.

“E. coli is used as an indicator organism, signaling the presence of pathogens from fecal material,” McDaniel explained. Common E. coli sources are fecal material from pets, livestock and wildlife as well as leaky septic tanks.

Tests to determine E. coli levels are fast and accurate. The results indicate the likely presence of more dangerous fecal-borne viruses and bacteria which are hard to screen for, Bleakley added.

“Typically, E. coli cannot survive long outside the host—that’s why it was chosen as an indicator,” McDaniel explained. However, other researchers have found that sediment can sometimes be a stable source of these bacteria.

“There is no established standard sampling method, so we’re trying to come up with one,” she said. Based on previous work, the researchers are taking 25 samples 5 feet apart at each of 5 sites, including some of the sites used to compile the surface water report.

The sediment research, which began in July 2016, is supported by a three-year, nearly $190,000 grant from the South Dakota Department of Environment and Natural Resources.

Preliminary data showed E. coli levels ranging from 30 to 788 colony-forming per gram of sediment in samples from one site, according to McDaniel.

Water quality standards for fishing, known as limited contact recreation, allow a maximum of 11.8 colony-forming units per gram of water. “Those who come into contact with water above that E. coli threshold are more likely to contract a gastrointestinal illness,” she explained.

E. coli attached to larger particles, such as sand and silt, affects the distance the bacteria travel during natural events, such as a rainstorm, McDaniel explained. Through a yearly grant from the Water Resource Institute through the U.S. Geological Survey, SDSU researchers are figuring out how these storm events affect water quality. This work began in May 2016.

“When E. coli grabs onto large particles, it tends to settle out into the stream bed faster,” McDaniel explained. “The unattached bacteria are more buoyant and travel longer distances in the water column.”

The researchers track attachment by taking water samples during a storm event. One set of data with samples taken every 30 minutes over a 5-hour period showed that only 25 percent of bacteria readily settled to the bottom. That means 75 percent of the bacteria stayed afloat for a longer time and have a greater chance of causing impairments to water quality, McDaniel noted.