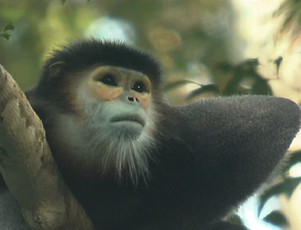 One of 42,000 globally threatened black-shanked douc langurs recently counted in a recent WCS survey in Cambodia.

The report counted 42,000 black-shanked douc langurs along with 2,500 yellow-cheeked crested gibbons in Cambodia's Seima Biodiversity Conservation Area, an estimate that represents the largest known populations for both species in the world.

WCS scientists conducted the surveys with the Royal Government of Cambodia's Ministry of Agriculture, Forestry and Fisheries across an area of 300 square miles (789 square kilometers) within a wider landscape of 1,150 square miles (3,000 square kilometers), which is about the size of Yosemite National Park. The scientists believe total populations within the wider landscape may be considerably greater.

The data were first presented at the International Primatological Society Congress held recently in Edinburgh, Scotland. WCS also announced at the IPS Congress the discovery of 125,000 western lowland gorillas in northern Republic of Congo, where conservation work has been ongoing since the early 1990s. "Whether it's protecting gorillas in the Republic of Congo or monkeys and gibbons in Cambodia, conservation can and does work when you have government commitment and scientific knowledge on the ground ," said Dr. John G. Robinson, Executive Vice President for Conservation and Science for the Wildlife Conservation Society. "Now we must put into place the management to truly protect these populations and apply the approach to other regions where primates are in trouble."

The two primate species are found in much lower numbers at other sites in Cambodia and in Vietnam. Prior to the recent discovery in the Seima Biodiversity Conservation Area, the largest known populations were believed to be in adjacent Vietnam, where black-shanked douc langurs and yellow-cheeked crested gibbons hover at 600 and 200 respectively. The total population of the two species remains unknown.

The recent census in Cambodia took place in a former logging area where the two monkeys were once extensively hunted. Then in 2002, the Minister of Agriculture, Forestry and Fisheries declared the region a conservation area and began working with WCS on site management and landscape-level planning for conservation and local development.

According to WCS, a combination of factors account for such high numbers of primates: successful long-term management of the conservation area; cessation of logging activities; a nation-wide gun confiscation program implemented in the 1990s; and habitat where there is plenty of food. The report says that the two primate populations started to recover in 2002 when the joint program between WCS and the Royal Government began and have remained stable since 2005.

The news on primates is not all good. In Cambodia, WCS researchers are concerned that looming threats could jeopardize recent successes.

"Despite this good news in Cambodia, the area still remains at risk from conversion to agro-industrial plantations for crops, including biofuels, and commercial mining," said Tom Clements, the lead author of the WCS report.

"WCS is therefore committed to continuing to work with the Cambodian Government to ensure that these globally important primate populations will continue to remain secure."

WCS has worked with the Royal Government of Cambodia since 1999, helping to establish the Seima Biodiversity Conservation Area, and developing landscape-level conservation programs in the Northern Plains and Tonle Sap Great Lake.

The Great Apes Conservation Fund and all the U.S. government funding to support global priority species and their habitat is at risk of being cut in the Fiscal Year 2009 federal budget. Although the budget process in Washington has stalled, WCS is calling for Congress to restore and grow these programs by completing work on the Fiscal Year 2009 budget before the end of September.

The Wildlife Conservation Society saves wildlife and wild places worldwide. We do so through science, global conservation, education and the management of the world's largest system of urban wildlife parks, led by the flagship Bronx Zoo. Together these activities change attitudes towards nature and help people imagine wildlife and humans living in harmony. WCS is committed to this mission because it is essential to the integrity of life on Earth. Visit: http://www.wcs.org

ELECTRONIC COPIES OF THE REPORT AND IMAGES ARE AVAILABLE UPON REQUEST