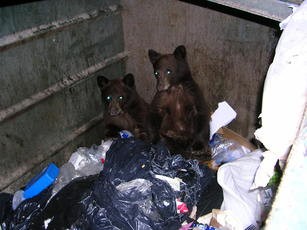 Newswise — Black bears that live around urban areas weigh more, get pregnant at a younger age, and are more likely to die violent deaths, according to a study by the Wildlife Conservation Society (WCS).

The study, published in the Fall 2008 issue of the journal Human-Wildlife Conflicts, tracked 12 bears over a 10-year period living in urban areas around Lake Tahoe, Nevada and compared them to 10 "wildland" bears that lived in outlying wild areas. The authors found that bears in urbanized areas weighed an average of 30 percent more than bears in wild areas due to a diet heavily supplemented by garbage. The authors believe that because the bears weigh more they are giving birth at an earlier age " on average when they are between 4-5 years old, as compared to 7-8 years for bears in wild areas. Some urban bears even reproduced as early as 2-3 years of age around Lake Tahoe.

Urban bears also tend to die much younger due mostly to collisions with vehicles, according to the study. All 12 urban bears tracked by the researcher were dead by age 10 due to vehicle collisions, while six of the wildland bears still survived. Bear cubs in urban areas also had dramatically higher mortality rates due mainly to vehicle collisions.

"Urban areas are becoming the ultimate bear traps," said Wildlife Conservation Society researcher Jon Beckmann, the study's lead author. "Because of an abundant food source " namely garbage " bears are being drawn in from backcountry areas into urbanized landscapes where they meet their demise."

The study warns that urbanized areas are functioning as "sinks" for black bear populations, drawing in bears from outlying wild areas, where they ultimately die. As a result, bears are failing to re-colonize outlying wild areas following this shift to urban centers.

The authors believe that without these sinks, populations of black bears in Nevada could increase. Right now, populations in Nevada remain steady due to bears immigrating from neighboring California. The Wildlife Conservation Society is studying the effects of urbanization and sprawl on a variety of wildlife and habitats in North America. WCS continues to work with local authorities to increase the use of bear-proof garbage containers and improve education efforts to reduce human-bear conflicts.

The Wildlife Conservation Society saves wildlife and wild places worldwide. We do so through science, global conservation, education and the management of the world's largest system of urban wildlife parks, led by the flagship Bronx Zoo. Together these activities change attitudes towards nature and help people imagine wildlife and humans living in harmony. WCS is committed to this mission because it is essential to the integrity of life on Earth. Visit: http://www.wcs.org