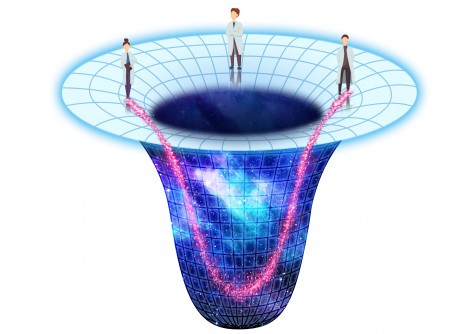 Newswise — Kyoto, Japan -- Our understanding of the universe may not be expanding as much as the universe itself. In some cases, our theories about cosmic inflation may feel as if they are deflating into a black hole.

Black holes, however, may be the exact analogy needed to mathematically approximate the universe's expansion. This may require some thinking outside of the box, or in this case, under a microscope.

Now emerging from Kyoto University's Yukawa Institute for Theoretical Physics is a novel approach that uses the holographic principle to describe the expanding universe in de Sitter space, which is an approximation of our current universe.

Holograms may conjure up images of interstellar video calls in sci-fi flicks, but for theoretical physicists they can also be mathematical, microscopic models encoding higher-dimensional information onto lower-dimensional surfaces. With entropy-filled black holes, scientists posit that information encoded on the event horizon is proportional to surface area, not to volume as in Euclidean geometry.

"To better understand the events following the Big Bang, we need a consistent theory of quantum gravity, and the de Sitter universe provides a solution to Einstein's general relativity equation with a positive cosmological constant," says author Tadashi Takayanagi.

This model, which excludes gravity, describes a two-dimensional framework approximating the expansion of our three-dimensional universe, enabling the authors to identify the first example of two-dimensional conformal field theory or CFT that typically utilizes a positive integer for the cosmological constant.

"A special feature of our proposed model is to use a negative cosmological constant to account for gravity on anti-de Sitter space," adds Takayanagi, "thus highlighting the importance of the holographic principle for de Sitter gravity."

While holography for anti-de Sitter space was first proposed in 1997, the results produced from the computational model demonstrated that basic quantities agreed between classical Einstein gravity and CFT.

The author concludes, "Quantum information theory has played an essential role in black hole physics, raising expectations for a deeper understanding of the space-time structure of a higher-dimensional universe."