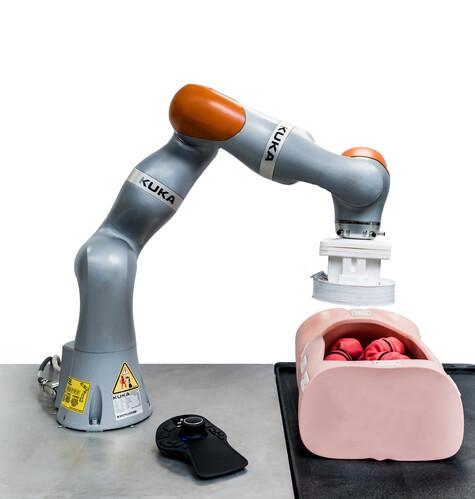 The robotic arm houses a magnet that interacts with magnets on a small capsule inside the patient and is able to navigate the capsule to the correct spot inside the colon. 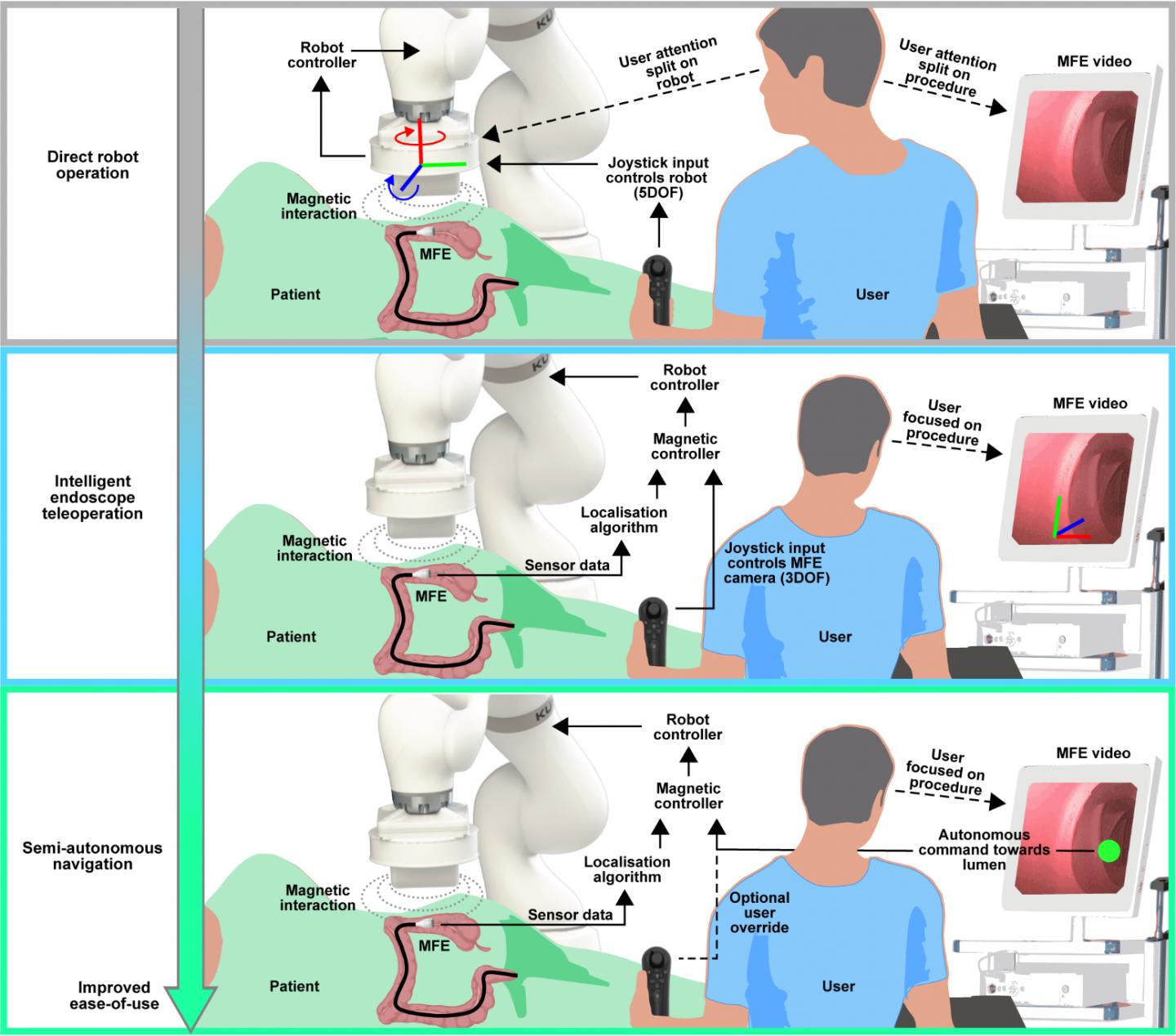 The diagram shows the levels of robotic assistance that are available, from no assistance through to semi-autonomous navigation

The table reveals how challenging the task was. The greener colours indicate tasks that were less challenging.

Newswise — Scientists have made a breakthrough in their work to develop semi-autonomous colonoscopy, using a robot to guide a medical device into the body.

The milestone brings closer the prospect of an intelligent robotic system being able to guide instruments to precise locations in the body to take biopsies or allow internal tissues to be examined.

A doctor or nurse would still be on hand to make clinical decisions but the demanding task of manipulating the device is offloaded to a robotic system.

The latest findings - 'Enabling the future of colonoscopy with intelligent and autonomous magnetic manipulation' - is the culmination of 12 years of research by an international team of scientists led by the University of Leeds.

The research is published today (Monday, 12 October) in the scientific journal Nature Machine Intelligence. Once the embargo lifts, the paper can be downloadable from https://www.nature.com/articles/s42256-020-00231-9

Patient trials using the system could begin next year or in early 2022.

Pietro Valdastri, Professor of Robotics and Autonomous Systems at Leeds, is supervising the research. He said: "Colonoscopy gives doctors a window into the world hidden deep inside the human body and it provides a vital role in the screening of diseases such as colorectal cancer. But the technology has remained relatively unchanged for decades.

"What we have developed is a system that is easier for doctors or nurses to operate and is less painful for patients. It marks an important a step in the move to make colonoscopy much more widely available - essential if colorectal cancer is to be identified early."

Because the system is easier to use, the scientists hope this can increase the number of providers who can perform the procedure and allow for greater patient access to colonoscopy.

A colonoscopy is a procedure to examine the rectum and colon. Conventional colonoscopy is carried out using a semi-flexible tube which is inserted into the anus, a process some patients find so painful they require an anaesthetic.

The research team has developed a smaller, capsule-shaped device which is tethered to a narrow cable and is inserted into the anus and then guided into place - not by the doctor or nurse pushing the colonoscope but by a magnet on a robotic arm positioned over the patient.

The robotic arm moves around the patient as it manoeuvres the capsule. The system is based on the principle that magnetic forces attract and repel.

The magnet on the outside of the patient interacts with tiny magnets in the capsule inside the body, navigating it through the colon. The researchers say it will be less painful than having a conventional colonoscopy.

Direct robot control. This is where the operator has direct control of the robot via a joystick. In this case, there is no assistance.

Intelligent endoscope teleoperation. The operator focuses on where they want the capsule to be located in the colon, leaving the robotic system to calculate the movements of the robotic arm necessary to get the capsule into place.

Semi-autonomous navigation. The robotic system autonomously navigates the capsule through the colon, using computer vision - although this can be overridden by the operator.

During a laboratory simulation, 10 non-expert staff were asked to get the capsule to a point within the colon within 20 minutes. They did that five times, using the three different levels of assistance.

In the next stage of the experiment, two participants were asked to navigate a conventional colonoscope into the colon of two anaesthetised pigs - and then to repeat the task with the magnet-controlled robotic system using the different levels of assistance. A vet was in attendance to ensure the animals were not harmed.

The participants were scored on the NASA Task Load Index, a measure of how taxing a task was, both physically and mentally.

The NASA Task Load Index revealed that they found it easier to operate the colonoscope with robotic assistance. A sense of frustration was a major factor in operating the conventional colonoscope and where participants had direct control of the robot.

James Martin, a PhD researcher from the University of Leeds who co-led the study, said: "Operating the robotic arm is challenging. It is not very intuitive and that has put a brake on the development of magnetic flexible colonoscopes.

"But we have demonstrated for the first time that it is possible to offload that function to the robotic system, leaving the operator to think about the clinical task they are undertaking - and it is making a measurable difference in human performance."

The techniques developed to conduct colonoscopy examinations could be applied to other endoscopic devices, such as those used to inspect the upper digestive tract or lungs.

Dr Bruno Scaglioni, a Postdoctoral Research Fellow at Leeds and co-leader of the study, added: "Robot-assisted colonoscopy has the potential to revolutionize the way the procedure is carried out. It means people conducting the examination do not need to be experts in manipulating the device.

"That will hopefully make the technique more widely available, where it could be offered in clinics and health centres rather than hospitals."

The University of Leeds

Caption: The robotic arm houses a magnet that interacts with magnets on a small capsule inside the patient and is able to navigate the capsule to the correct spot inside the colon.

Caption: The diagram shows the levels of robotic assistance that are available, from no assistance through to semi-autonomous navigation

Caption: The table reveals how challenging the task was. The greener colours indicate tasks that were less challenging.