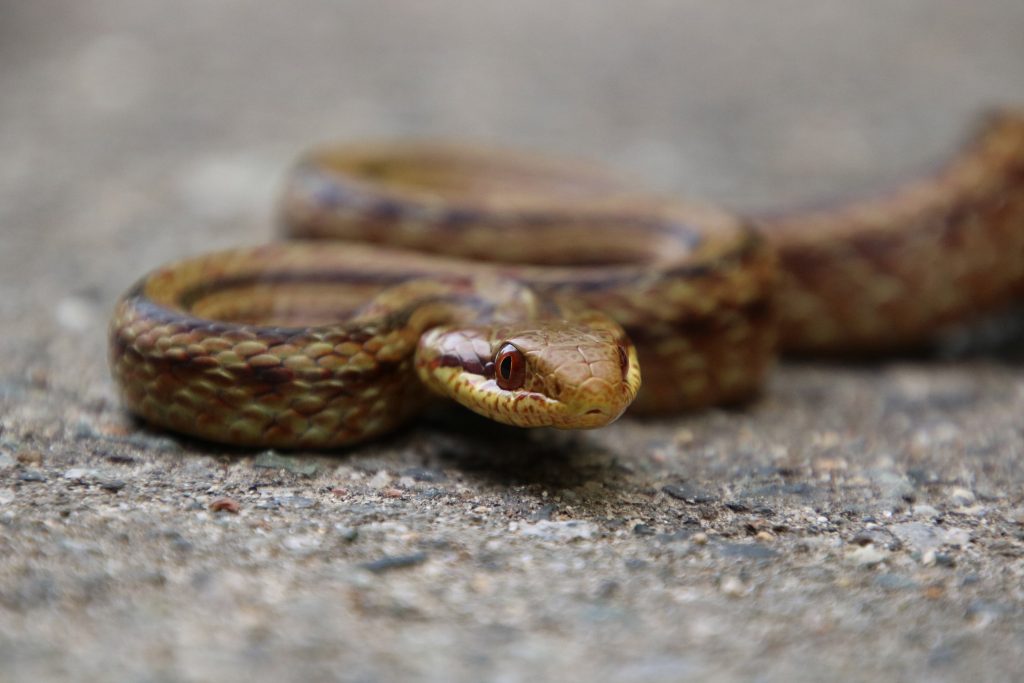 A Japanese rat snake crossing a rural road in the Fukushima Evacuation Zone in Japan. 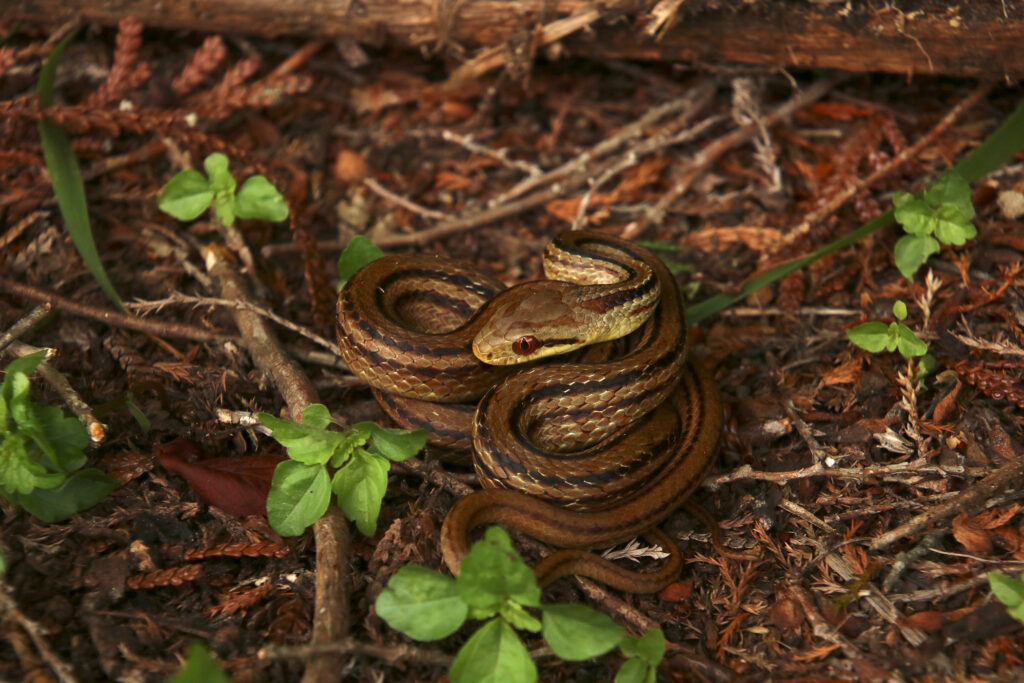 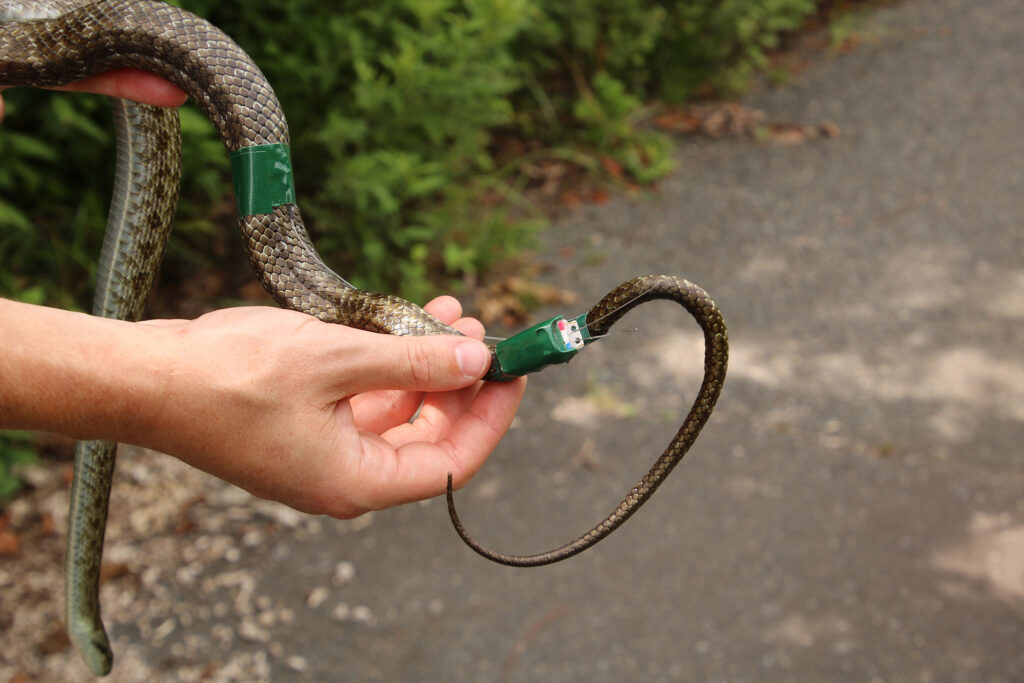 A Japanese rat snake is fit with a GPS transmitter that will allow researchers to track its movements over the next several weeks. 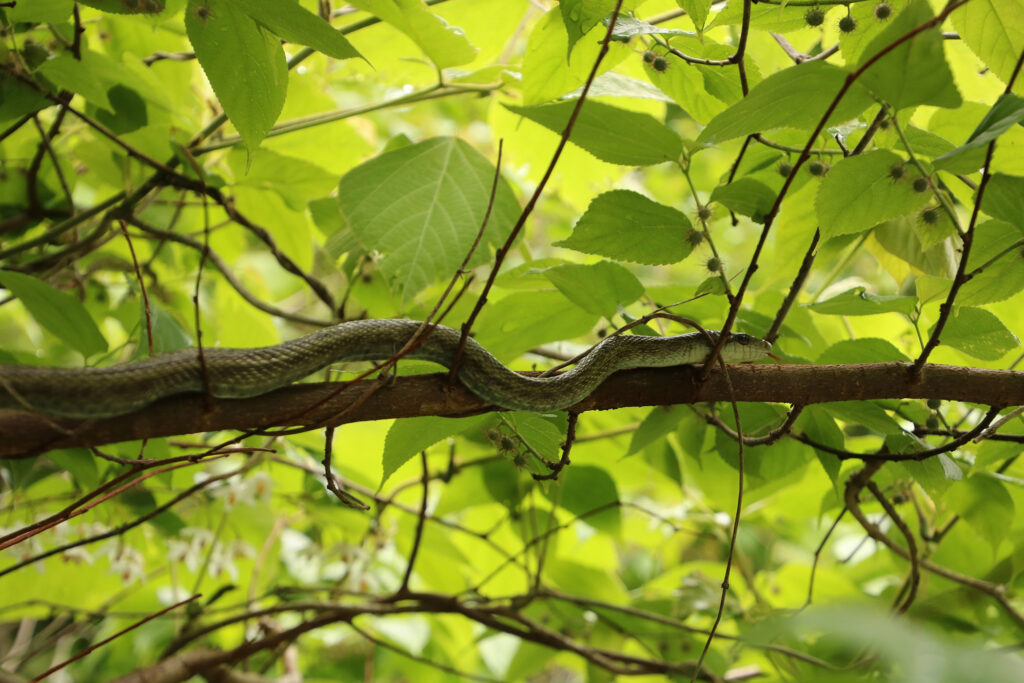 A Japanese rat snake conceals itself in a tree.

The team’s findings, published in the recent journal of Ichthyology & Herpetology, report that rat snakes are an effective bioindicator of residual radioactivity. Like canaries in a coal mine, bioindicators are organisms that can signal an ecosystem’s health.

An abundant species in Japan, rat snakes travel short distances and can accumulate high levels of radionuclides. According to the researchers, the snakes’ limited movement and close contact with contaminated soil are key factors in their ability to reflect the varying levels of contamination in the zone.

“Our results indicate that animal behavior has a large impact on radiation exposure and contaminant accumulation,” Gerke said. “Studying how specific animals use contaminated landscapes helps increase our understanding of the environmental impacts of huge nuclear accidents such as Fukushima and Chernobyl.”

Why are snakes a good indicator of radioactive contamination?

“Snakes are good indicators of environmental contamination because they spend a lot of time in and on soil,” said Beasley, associate professor at SREL and Warnell. “They have small home ranges and are major predators in most ecosystems, and they’re often relatively long-lived species.”

The team identified 1,718 locations of the snakes while tracking them for over a month in the Abukuma Highlands, approximately 15 miles northwest of the Fukushima Daiichi Nuclear Power Plant. The paper’s findings reinforce the team’s previous study published in 2020, which indicated the levels of radiocesium in the snakes had a high correlation to the levels of radiation in the soil where the snakes were captured.

How to track snakes

To determine where the snakes were spending their time and how far they were moving, the team tracked nine rat snakes using a combination of GPS transmitters and manual very-high frequency tracking. Beasley said VHF transmitters allowed the team to physically locate a snake every few days to identify if it was underground or in arboreal habitat.

Working in the hilly, rugged terrain of abandoned villages and farms, the team located snakes in trees, grasslands and along roadside streams. Gerke said the snakes avoided the interior of conifer forests but were often found in deciduous forests, along forest edges and inside of abandoned buildings. More than half of the tracked snakes, she said, spent time in abandoned barns and sheds, which can help shield them from contamination in the surrounding soil.

During winter months, their risk of exposure likely increases when they seek shelter underground, close to the more heavily contaminated soils. Future work to clarify the link between the micro-habitat use of species like snakes and their contaminant exposure, as well as the potential health risks to snakes and other wildlife due to increased radiation exposure, will be critical to understanding the effects of the Fukushima Daiichi accident on local wildlife populations.

The full study is available online at https://meridian.allenpress.com/copeia/article-abstract/109/2/545/467583/Movement-Behavior-and-Habitat-Selection-of-Rat?redirectedFrom=fulltext

Cutline: A Japanese rat snake crossing a rural road in the Fukushima Evacuation Zone in Japan. (Photo by Hannah Gerke)

Cutline: A Japanese rat snake is fit with a GPS transmitter that will allow researchers to track its movements over the next several weeks. (Photo by Hannah Gerke)

Cutline: A Japanese rat snake conceals itself in a tree. (Photo by Hannah Gerke)

This release is available online at https://news.uga.edu/using-snakes-to-monitor-fukushima-radiation/

Caption: A Japanese rat snake crossing a rural road in the Fukushima Evacuation Zone in Japan.

Caption: A Japanese rat snake is fit with a GPS transmitter that will allow researchers to track its movements over the next several weeks.

Caption: A Japanese rat snake conceals itself in a tree.