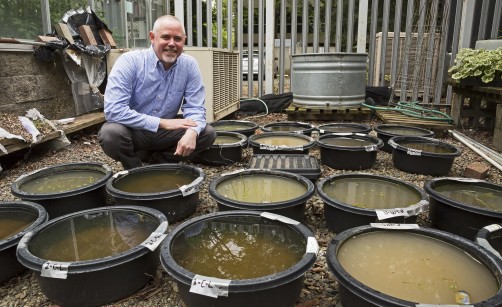 Newswise — It may seem counterintuitive, but Sacramento State Professor Jamie Kneitel is traveling to Israel this fall to learn more about seasonal wetlands in California, as well as those elsewhere in the world.

The professor will travel to Israel in September on a Fulbright Fellowship to conduct research with Professor Leon Blaustein at the University of Haifa. Kneitel also will teach a graduate course there in the Department of Evolutionary and Environmental Biology.

Kneitel says the Fulbright represents a rare, personal opportunity to explore another country and its culture. “I’m overwhelmed with excitement. This is a once-in-a-lifetime opportunity to live in another country,” he says. “My wife, son, and daughter are coming with me and we’re looking forward to exploring the country together.”

Kneitel’s specialty is vernal pools – part-time wetlands that form in the winter, dry up in the spring, and are located in what are termed Mediterranean climates. Mediterranean climates are mild, located at specific latitudes on the west coasts of continents, and bordered on the east by desert areas. They have very similar ecosystems.

These areas are found all around the globe but, collectively, take up just 5 percent of the Earth’s surface and are thousands of miles apart – in California, countries bordering the Mediterranean Sea, Chile, Australia, and South Africa. They present a unique opportunity to compare differences and similarities.

The project Kneitel and Blaustein will work on involves comparing parallel experiments conducted in California’s and Israel’s vernal pools, and assembling data – published and unpublished – from all Mediterranean regions to determine general patterns of species diversity and ecosystem function.

“One of the goals is to see if there are general principles in these different regions that influence the patterns in vernal pool ecosystems,” Kneitel says. “Do they function similarly? Do they respond to disturbances in a similar way? Do the species in the ecosystems interact in similar ways?”

While there has been considerable research on these areas focusing on either their wet or dry seasons, not much has been done in studying the entire cycle, from the spring when the pools are teeming with small aquatic life to the period when the ponds begin to dry, giving way to fields of wildflowers, and beyond. Kneitel’s research addresses how these wet and dry phases influence each other in time.

The pools in these widespread Mediterranean regions have unique species, but they have similar traits, such as aquatic life that has adapted by going dormant in the earth or laying eggs in the mud that can survive many years in dry ground if necessary. Likewise, the species in the dry phase have adaptations to survive the winter flooding.

“Because the habitat is so limited, there are many endangered, very unusual species that you don’t find anywhere else,” Kneitel says.

Raised in Los Angeles, Kneitel got his undergraduate degree at UC Santa Cruz. While getting his master’s at CSU Northridge, he did research in the grasslands of the southern San Joaquin Valley, where he became interested in the Mediterranean climates. After earning a doctorate at Florida State University and a two-year post-doc at Washington University in St. Louis, he arrived at Sacramento State and focused on vernal pools.

Kneitel and his students have conducted research at sites such as Travis and Beale Air Force bases and Mather Field. They also have on-campus “lab” projects, creating artificial vernal pools by lining large, shallow tanks with soil from vernal pools and filling them with water. Located near the University Arboretum and the greenhouses, the tanks bring all the pool’s flora and fauna to life.

Kneitel is grateful for the opportunity to expand his research in this way and looks forward to the experience. “I’ve never lived outside the United States and have lived most of my life in California, so this is going to be a great adventure.”