Nurse-Led Study: Device Is Similar in Pain Relief to Topical Anesthetic, but Much Faster 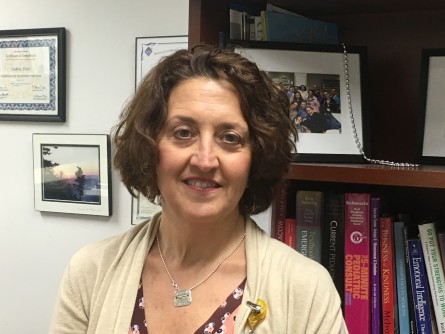 Debra A. Potts is a nurse manager in emergency medicine at Children's Hospital of Philadelphia

--Nurse-Led Study: Device Is Similar in Pain Relief to Topical Anesthetic, but Much Faster--

Newswise — Philadelphia, June 1, 2017-- A vibrating device, used with a cold pack, relieves a child’s pain while emergency department caregivers insert an intravenous (IV) catheter, equally as well as the currently used anesthetic, topical lidocaine. The device can be used quickly, unlike lidocaine, which requires 30 minutes to fully take effect.

Researchers from Children’s Hospital of Philadelphia (CHOP) who conducted the study recommend follow-up investigations to further evaluate the device. The study appeared online ahead of the printed version in the journal Pediatric Emergency Care.

“This is the first study to compare a vibrating cold device to topical lidocaine in reducing the pain and distress experienced by children during IV insertion,” said study leader Debra A. Potts, RN, MSN, CPEN, nurse manager in the emergency medicine department at CHOP. “This is important because hospitalized children experience IV insertion as a very painful and stressful event, and they can have post-traumatic stress symptoms if their pain is not adequately controlled.”

The study team compared results in 251 children, four to 18 years old, treated at the CHOP emergency department. All the patients were accompanied by a parent or guardian; none was in severe trauma but all required an IV. The researchers randomized the patients into two groups, one receiving topical lidocaine, the other receiving the vibrating cold device (VCD). The VCD was battery-powered and reusable.

Based on the children’s self-reports of pain and anxiety, there were no significant differences between the VCD group and the lidocaine group. Caregivers and nurses also expressed high levels of satisfaction with both methods of pain control during IV insertion.

Potts added that the shorter time of onset for the VCD compared to that of lidocaine could be a distinct advantage in a busy emergency department setting:  “We anticipate that using this device would enable nurses to insert an IV with little pain for the child at least 30 minutes sooner than using topical lidocaine.”

However, she added that follow-up studies with larger numbers of patients need to be carried out to further evaluate the device.

The Center for Pediatric Nursing Research and Evidence-Based Practice at CHOP and the Stefan Maar Memorial Fund supported this study.

About Children’s Hospital of Philadelphia: Children’s Hospital of Philadelphia was founded in 1855 as the nation’s first pediatric hospital. Through its long-standing commitment to providing exceptional patient care, training new generations of pediatric healthcare professionals and pioneering major research initiatives, Children’s Hospital has fostered many discoveries that have benefited children worldwide. Its pediatric research program is among the largest in the country. In addition, its unique family-centered care and public service programs have brought the 535-bed hospital recognition as a leading advocate for children and adolescents. For more information, visit http://www.chop.edu.