The team’s methods have already contributed to improvements in football helmet design. When the first batch of ratings was released, only one helmet earned five stars. Today, 16 do, and virtually all new helmets get high marks.

Impact simulators and sensor-equipped dummy heads help researchers in the Virginia Tech Helmet lab re-create head impacts a hockey player might experience during a game and measure how well a particular helmet cushions them. 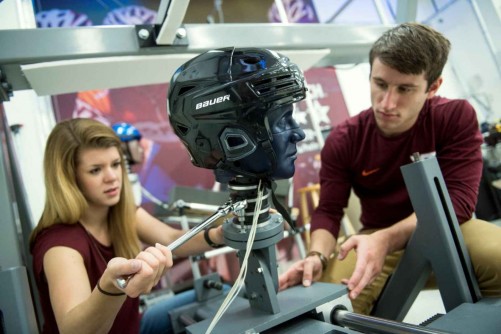 Newswise — A newly released hockey helmet has earned four out of five stars from the Virginia Tech Helmet Ratings, scoring higher than any other helmet since the first hockey ratings were released two years ago.

The new helmet, the Bauer RE-AKT 200, is the first to earn more than three stars.

The star rating system, developed by researchers in the Virginia Tech Helmet Lab, rates a helmet’s ability to reduce the risk of concussion in the event of a head impact.

All sports helmets, including those for hockey, must meet an impact-protection standard that evaluates the ability of helmets to minimize catastrophic head injury on a pass-fail basis.

“We supplement the standard by providing additional data so consumers can see the relative differences between helmets,” said Steve Rowson, an assistant professor of biomedical engineering and mechanics in the College of Engineering and director of the Helmet Lab. “We make that data available and release our testing methodology, which then becomes an additional design tool for the manufacturers.”

Using a headform instrumented with sensors, the Helmet Lab team simulates a range of impacts that a player might experience during a game, and measures how much the helmet reduces the head’s linear and rotational acceleration.

Rowson and Stefan Duma, the Harry Wyatt Professor of Engineering and interim director of the Institute for Critical Technology and Applied Science, began evaluating football helmets in 2011, designing the test methods based on millions of impacts they recorded from Virginia Tech football players.

The Helmet Lab team started testing hockey helmets a few years later, and has since rated more than 40 models.

Hockey players hit their heads on the ice, the glass around the rink, or each other; these surfaces can be rigid and players are typically traveling at high speeds, so impacts may be more severe than in other contact sports.

And hockey helmets tend to be light and thin, which limits their ability to reduce the force of a hit. In order to effectively absorb energy during an impact, thinner foam must be stiff. Thicker, softer foam that has more time to compress can cushion a broader range of impacts. The new Bauer helmet has slightly thicker padding than other models.

“I think this is the first example of the hockey helmet manufacturers using this test methodology and ratings protocol to influence the design,” Rowson said. “What we wanted to do was set a framework for improvement in protective design.”

The team’s methods have already contributed to improvements in football helmet design. When the first batch of ratings was released, only one helmet earned five stars. Today, 16 do, and virtually all new helmets get high marks.

“With the helmet ratings, we provide unbiased data and a transparent process that manufacturers can use to inform their design process and consumers can use to guide their choices,” Duma said. “We’ve been glad to have the opportunity to work with helmet companies to drive innovation, because we all have the same goal: to keep athletes as safe as possible.”

The team is also developing five-star ratings for bicycle and lacrosse helmets and soccer headgear.

Rowson says that helmets are just one piece of the equation in eliminating concussions. Behavioral changes in sports — for example, banning body-checking in youth hockey — can make an even more significant difference in reducing the number of injuries.

“You want to eliminate as many head impacts as you can, and then have the very best head protection in the event that you do hit your head,” he said.

The team’s current ratings are available online, and updated on a rolling basis.