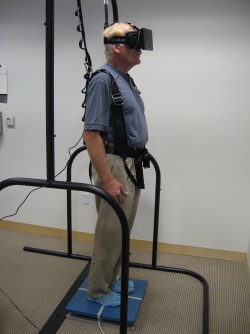 Newswise — SAN FRANCISCO – April 16, 2015 – Falls are the leading cause of injury-related death and morbidity in older adults, especially those with a chronic eye disease such as glaucoma. To investigate this problem, a multidisciplinary group of researchers has become the first to use virtual reality technology to develop a new method for measuring balance control in those with glaucoma. The results of their study, published online today by Ophthalmology, the journal of the American Academy of Ophthalmology, demonstrate that virtual reality provides a more realistic testing environment compared to traditional testing methods.

People with glaucoma have a more than three times greater risk of falling than those without the condition. Yet, research to date has shown only a weak correlation between results obtained by visual field testing and risk of falls in glaucoma patients. To address this issue, a group of researchers based at the University of California, San Diego, sought to develop a new, more effective approach using virtual reality goggles.

The team of ophthalmologists, vision scientists and engineers studied 42 patients with open-angle glaucoma and 38 healthy subjects as a control. The subjects wore Oculus Rift stereoscopic goggles that can simulate different settings while standing on a force platform, a device that measures balance and movement. Measurements were recorded by the force platform, including when the goggles simulated movement such as moving through a tunnel or a spinning floor, and when the goggles were not worn or were not providing visual stimulation.

During simulated movement, researchers found that participants made balance adjustments that were an average of 30 to 40 percent more pronounced in glaucoma patients than in healthy subjects, who were able to regain balance more quickly than those with glaucoma. The study authors suspect that the pronounced lack of balance control in the subjects with glaucoma may be related to the loss of retinal ganglion cells caused by the disease, which leads to slower visual processing and impaired motion perception.

The study also found that the degree to which balance was lost was strongly linked to a history of falls, which validated the study’s methods and metrics. The researchers hope that future studies using this paradigm will help ophthalmologists better understand the relationship between risk of falls and retinal ganglion cell loss in people with glaucoma.

“Measures from traditional static visual field tests do not mimic the visual conditions that occur day-to-day,” explained Felipe A. Medeiros, M.D., senior author and professor of ophthalmology and director of the Visual Performance Laboratory at the University of California, San Diego. “With further refinement of this method, we hope that the approach could one day be used to identify patients at high-risk of falling so that preventative measures can be employed at an earlier stage.”

Glaucoma is a leading cause of irreversible blindness worldwide, affecting more than 2.7 million individuals aged 40 and older in the United States. In its most common form, known as open-angle glaucoma, fluid builds up in the front part of the eye, increasing eye pressure and damaging the optic nerve. Without proper treatment to halt the nerve damage, open-angle glaucoma patients usually lose peripheral vision first and may eventually go blind.

About the American Academy of OphthalmologyThe American Academy of Ophthalmology, headquartered in San Francisco, is the world's largest association of eye physicians and surgeons, serving more than 32,000 members worldwide. The Academy's mission is to advance the lifelong learning and professional interests of ophthalmologists to ensure that the public can obtain the best possible eye care. For more information, visit www.aao.org.

The Academy is also a leading provider of eye care information to the public. The Academy's EyeSmart® program educates the public about the importance of eye health and empowers them to preserve healthy vision. EyeSmart provides the most trusted and medically accurate information about eye diseases, conditions and injuries. OjosSanos™ is the Spanish-language version of the program. Visit www.geteyesmart.org or www.ojossanos.org to learn more.