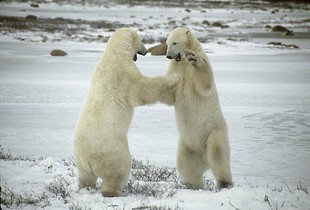 The "Warm Waters for Cool Bears" project will examine both current and historical satellite imagery to predict where sea ice will persist in the future and where conservation efforts to save polar bears will be most effective.

Newswise — In the wake of the U.S. government's watershed decision to propose listing the polar bear as "Threatened" under the Endangered Species Act, the Wildlife Conservation Society (WCS) is launching a bold initiative to save the Earth's largest terrestrial predator, not by following the bears themselves, but the receding sea ice habitat that may drastically shrink as a result of global warming. In a project named "Warm Waters for Cool Bears," WCS will use both current and historical satellite imagery to predict where sea ice is likely to persist and where subsequent conservation efforts to save the species will be most effective.

The new project will be funded by a $100,000 grant from the Wendy P. McCaw Foundation and will enable landscape ecologists to bring nearly 30 years of daily collected satellite imagery and meteorological data into a Geographical Information Systems (GIS) map that will enable conservationists to more accurately predict where sea ice—a vital habitat for polar bears and seals that they prey on—will remain into the near future.

"The polar bear could be at the crossroads," said Scott Bergen, a landscape ecologist with WCS' Living Landscapes Program and the principal investigator for the project. "The survival of some polar bear populations depend on the decisions we make within the next year. Fortunately, by using available data on sea ice trends over the past few decades, we can make effective decisions that can make a difference for the largest carnivore on earth."

The "Warm Waters for Cool Bears" initiative represents a departure from previous polar bear studies, which typically focused on either observing individual bears or following them with satellite collars, often at great cost and risk to bears and researchers alike.

Polar bears rely on seasonal sea ice for stalking their principal prey—ringed and bearded seals. Without the ice, the bears generally cannot get anywhere near these fast swimming marine mammals. Another threat to the bears is the unpredictability of the melting of the sea ice away from the coast regions that bears shift to in the warmest parts of the year. Bears that make it to shore may be there for increasingly longer periods of time without food as the sea ice becomes more distant and inaccessible.

The main question for conservationists is which of the existing 18 populations of polar bears occurring on two continents and one sub-continent stand the best chance of surviving as the polar cap shrinks in size. To that end, the project will utilize remote sensing satellite imagery on sea ice extent and concentration since 1978 to form a picture of polar bear habitat history as well as where this habitat most likely remain in the future under global warming projections. When combined with meteorological data, the researchers hope to distinguish short-term, seasonal effects and large scale phenomena such as the Arctic and North Atlantic Oscillations from the long-term global warming trends that threaten the Arctic's mega-fauna.

"This will be the first distribution wide study on the ecological needs of polar bears in the context of global warming," said Dr. Gary Tabor, director of WCS' North America Program. "This will allow us to understand past studies on the species in relation to other populations, and will inform important management activities such as designating protected areas for polar bears and their prey species."

The first step of the new program will entail a workshop involving scientists, polar bear experts, and relevant organizations to provide input on the initial direction of the project. Following steps will include synthesizing available and subsequent data into the GIS platform, which can then be used to generate the trends and recommended conservation actions. Findings will be presented in a peer-reviewed journal, future international conferences, and presented to countries and first nations actively managing and monitoring polar bear population trends.