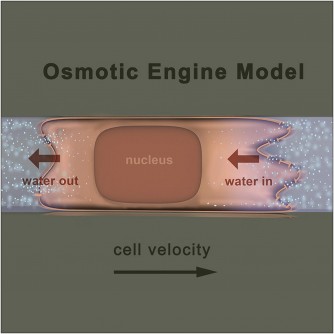 An illustration of a newly discovered method cancer cells use to spread around the body.

A video accompanying this release can be viewed here.

Newswise — Johns Hopkins researchers have discovered a new mechanism that explains how cancer cells spread through extremely narrow three-dimensional spaces in the body by using a propulsion system based on water and charged particles.

The finding, reported in the April 24 issue of the journal Cell, uncovers a novel method the deadly cells use to migrate through a cancer patient’s body. The discovery may lead to new treatments that help keep the disease in check. The work also points to the growing importance of studying how cells behave in three dimensions, not just atop flat two-dimensional lab dishes.

Based on such lab dish studies, cancer researchers had concluded that tumor cells require actin and other proteins to form arm-like extensions to “crawl” across the flat surfaces. This type of travel was believed to be the primary means of how cancer spreads within a patient, a process called metastasis. Based on this conclusion, researchers have been working on ways to disable actin and its molecular helpers, hoping this can keep cancer from spreading.

But in a study published in 2012, a Johns Hopkins team led by Konstantinos Konstantopoulos, chair of the Department of Chemical and Biomolecular Engineering, found that tumor cells could move through narrow spaces without using actin and its biochemical partners.

“That was a stunning discovery, not in line with the prevailing beliefs about how cells migrate,” Konstantopoulos said. “So we wanted to figure out exactly how the tumor cells were able to move through these spaces without relying on actin.”

He collaborated with Sean X. Sun, a Johns Hopkins associate professor of mechanical engineering with experience in math modeling and physics at microscopic levels.

“The mystery we needed to solve,” Sun said, “was how the cells in these confined spaces could still move when you took away their usual ‘engine,’ the actin.”

Kostantopoulos said Sun and Hongyuan Jiang, a postdoctoral fellow working in Sun’s lab, “came up with a phenomenal mathematical model that provided insights into how the cells might use a different system to travel.” Then Konstantopoulos and other team members, including Kimberly Stroka, a postdoctoral fellow in his own lab, used a microfluidic lab-on-a-chip and imaging techniques to conduct experiments establishing the new mechanism of migration proposed by Sun and Jiang’s model. The tests utilized human and animal cancer cells. Stroka and Jiang were designated co-lead authors of the resulting journal article.

As reported in the article, the tumor cells’ new “engine” turned out to be a combination of sodium-hydrogen ions, cell membrane proteins called aquaporins, and water. The researchers found that within tight spaces, cancer cells create a flow of liquid that takes in water and ions at a cell’s leading edge and pumps them out the trailing edge, propelling the cell forward. In the actin-dependent migration model, the cell is pushed forward by the biochemical equivalent of a boat engine. The water-based mechanism, the researchers said, more closely resembles the way a sailboat is thrust ahead by gusts of wind. The team called this mechanism the Osmotic Engine Model.

“This discovery is important because it reveals one reason why some diseases like cancer don’t always respond to certain treatments,” Konstantopoulos said. Sun added, “It’s because these diseases have redundant mechanisms—more than one method—for migrating through the body.”

The Johns Hopkins researchers are applying for funds to conduct further research into physical and biological aspects of the Osmotic Engine Model. Their hope is that the work will uncover a way to shut down this biochemical engine and keep it from spreading tumor cells.

The multidisciplinary research at Johns Hopkins was conducted within the university’s Institute for NanoBioTechnology and its Physical Sciences-Oncology Center. These organizations and the departments of Chemical and Biomolecular Engineering and Mechanical Engineering are based in the Whiting School of Engineering.

Co-lead author of the Cell article Stroka will join the faculty of the University of Maryland College Park as an assistant professor later this year. Whiting School postdoctoral fellow Jiang, the other lead author, is now a professor at the University of Science and Technology of China. Kostantopoulos and Sun supervised the research and served as senior authors of the paper. Other co-authors, all from Johns Hopkins, were Shih-Hsun Chen, Ziqiu Tong and Denis Wirtz.