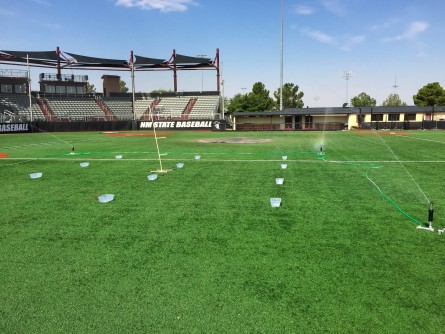 A section of New Mexico State University's baseball field, which is artificial turf, was set up with catch cans to make sure the temporarily installed irrigation system reached the whole section equally while measurements were taken twice a day. 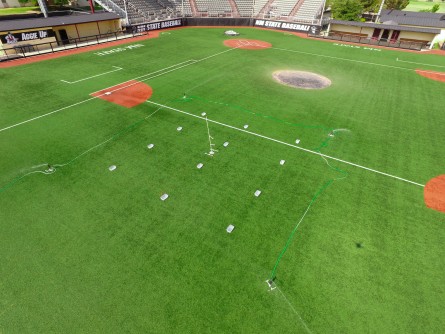 An aerial view of New Mexico State University's baseball field where catch cans and the project site were set up to take measurements of how much water it would take to cool artificial turf and for how long. 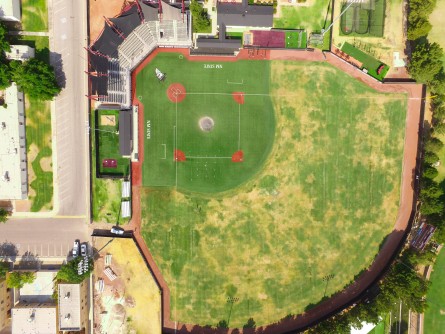 An aerial shot of the 40 by 40 feet project site located on New Mexico State University's baseball field. The project aimed to find out if artificial turf uses less water than real grass does.

Newswise — As a turfgrass specialist, New Mexico State University professor Bernd Leinauer is asked a lot of questions relating to artificial grass and whether it actually is a water- conserving alternative to real grass since that’s how it is marketed and portrayed to the public. So, he sought out the help of a Ph.D. engineering student and his mentor to ask the question, is artificial turf actually saving water compared to real grass?

When Leinauer approached Ahmed Kanaan and his mentor and NMSU engineering professor Igor Sevostianov, he was told a small equation could calculate the answer to his question.

“I’m usually a little bit skeptical about (theoretical calculations), so we agreed that Ahmed would first do the equation so we can see what the model tells us and how much water would be needed to keep the artificial turf cool. Then we will actually go out and measure and see if the model holds true and if the two numbers line up,” Leinauer said.

After receiving his answer from the equation, Kanaan set up his experiment over the summer on the artificial turf located on the infield of NMSU’s baseball field. He set up a parameter of 40 by 40 feet on the turf and installed a temporary irrigation system.

“After I set everything up, I decided to run the irrigation system for 20 minutes to see how long it would take to heat back up. I took two readings each day, one in the morning and one at noon, just to see the distribution of temperature,” Kanaan said. “The model I used calculated the amount of water required to cool the artificial turf correctly with an acceptable margin of error but there was no information how long it takes for the field to heat up again.”

“He measured the surface temperature and one and two meters above the ground, so you could see the heat buildup over the field. He turned on the irrigation and cooled the turf and then measured and documented how long it takes to cool, when the artificial turf gets hot again and how long does it take for that to happen,” Leinauer said.

Reports have been published that artificial turf can reach temperatures as high as 180 degrees, making it a concern for athletes who face the possibilities of getting injuries while playing on the field. While artificial turf can withstand more traffic from play compared to real grass that faces wear and tear and needs recovery time, the question remains, does it need less water than real grass?

“At the end of the day what was still stunning to me was we irrigated for 20 minutes and in these 20 minutes we cooled the artificial turf down to more or less body temperature so that it would be comfortable for any athlete but within an hour after irrigation we were up at the high temperature again. So, if we irrigated at the beginning of a soccer game, the cooling wouldn’t even last the entire soccer game and then we’re hot again. And in these 20 minutes, we put out enough water that would last for a Bermudagrass field for an entire day.”

Not only would the artificial turf need to be irrigated multiple times a day to keep it cool, anything surrounding the turf would also be impacted by the heat.

“The surrounding buildings and grass are going to get affected because of the reflection of the heat. I had Bermudagrass next to the artificial turf and the Bermudagrass increased in heat causing it to be damaged by the heat.” Kanaan said. “When I would go to the field to get measurements I could not stay on the ground to do it. I burnt the back of my neck and my wrists, but I had no other choice I needed to sit down there and get the measurements. When the heat reflected on to you, you cannot breathe,” Kanaan said.

Sevostianov said there was no previous literature on this topic and said more research is needed to investigate in more detail.

“When we started looking for literature, we found many aspects of artificial turf discussed in literature, mostly economical ones. But nobody considered aspects of watering and nobody compared it to natural grass,” Sevostianov said. “So, it definitely opens a lot of possibilities, we are definitely thinking about going deeper and asking for external support. It was also a nice example of collaboration between two completely different disciplines in two colleges.”