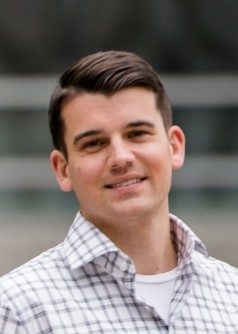 Newswise — DETROIT – Eric Woodcock, a Ph.D. student in the Department of Psychiatry and Behavioral Neurosciences in Wayne State University‘s School of Medicine, has been awarded a two-year, $76,000 predoctoral fellowship from the National Institute of Drug Abuse (NIDA) of the National Institutes of Health for the project,“Neuropharmacological investigation of frontostriatal network function and nicotine seeking behavior in current smokers.“

The NIH predoctoral fellowship is a highly regarded, prestigious award, which will provide training support for Woodcock to investigate the effects of stress in cigarette smokers in a controlled experiment, and relate physiological and smoking behavior changes to changes found in brain imaging markers (chemistry, function and network dynamics).

“The study design integrates multiple neuroimaging technologies that are highly novel and will provide Eric with a unique set of skills and expertise that will establish a sound foundation for his continued training in academic research,” said Mark Greenwald, Ph.D., professor of psychiatry and behavioral neurosciences at Wayne State. “This NIDA award reflects Eric's academic promise and specific plans to achieve his objectives, and will position him in the top tier of emerging addiction neuroscientists.”

The normal stresses of daily life often contribute to individuals relapsing to substance use by creating aversive internal sensations such as anxiety or distress, increasing appetitive motivation such as cravings, and/or degrading executive function such as self-control.

“These factors do not exist in isolation but, rather, occur simultaneously and interact to promote relapse,” said Woodcock. “After a stressful event, a person who previously had quit smoking may feel distressed which will enhance their desire to smoke, thus challenging their ability to exercise self-control. One of the goals of this study is to better understand how stress alters brain function and make individuals more likely to relapse such that better treatments can be developed for patients.”

According to Woodcock, he will investigate the prefrontal cortex and how stress impairs its functioning. This area of the brain is associated with higher order thinking and planning, goal-directed behavior, self-control and delayed gratification. If his hypothesis is supported, he and other researchers will investigate medications that may blunt the effect of stress on prefrontal cortex function, which may increase the likelihood of patients’ maintaining abstinence.

Woodcock received a bachelor of science in psychology from the University of Washington, Seattle. He is mentored by Dr. Mark Greenwald, Dr. Vaibhav Diwadkar and Dr. Jeffrey Stanley, all professors in the Department of Psychiatry and Behavioral Neurosciences in Wayne State University’s School of Medicine.

The project number for this National Institutes of Health study is F31 DA040369.