• Atlantic humpback dolphin now listed as “Critically Endangered” • Lives exclusively in shallow coastal habitat and is threatened by entanglement in fishing nets, the degradation of coastal habitats and hunting

A group of scientists now considers the Atlantic humpback dolphin to be among Africa’s most endangered mammals. 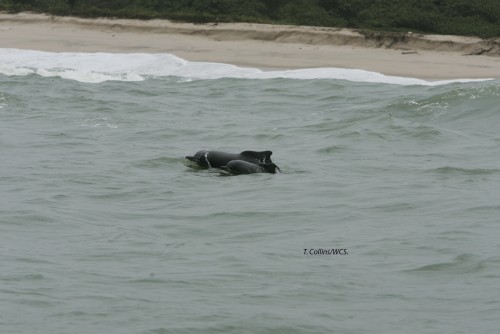 Newswise — NEW YORK (December 21, 2017) — A group of scientists now considers a little-known dolphin that only lives along the Atlantic coasts of Western Africa to be among the continent’s most endangered mammals, a list that includes widely recognized species such as gorillas, African wild dogs, and black rhinos, according to WCS (Wildlife Conservation Society) and the IUCN’s (International Union for Conservation of Nature) Cetacean Specialist Group.

The latest assessment of the Atlantic humpback dolphin (Sousa teuszii) reveals a new and mostly depressing reality: the obscure and poorly studied dolphin is now considered to be in great peril across most of its coastal range and has been uplisted from “Vulnerable” to “Critically Endangered” on IUCN’s Red List of Threatened Species.

Growing up to 2.5 meters (more than 8 feet) in length, the Atlantic humpback dolphin is gray in color and has a characteristic hump just below its dorsal fin. These dolphins are shy, occur in small groups, and rarely venture more than a few kilometers from shore. They are highly susceptible to human activities in coastal waters, and threats include entanglement in fishing gear, offshore construction such as port development, and hunting for human consumption.

“Our recent assessment suggests that the global population of the Atlantic humpback dolphin likely numbers fewer than 1,500 breeding adults distributed among several isolated sub-populations, most of which appear to be very small,” said Tim Collins, of WCS’s Ocean Giants Program and the Africa Coordinator of the IUCN’s Cetacean Specialist Group.

The presumed range of the Atlantic humpback dolphin stretches more than 7,000 kilometers along the coastal areas of Western Sahara to central Angola. The previous “Vulnerable” listing for the species was based largely on the assumptions that dolphins were more abundant in areas where the species was known to occur and the presumption of occurrence in many areas had not been surveyed.

For the new Red List assessment, researchers conducted a thorough review of the available data, which strongly suggest that the dolphins occur in very low and apparently declining numbers throughout most or all of their range. Most populations are extremely small and several appear to be isolated. Declines have been observed (or are suspected) for every known population, and their continued decline is considered inevitable given the ongoing expansion of identified threats throughout the species’ known range.

Bycatch in fisheries, the principal cause of the declines, has been identified or suspected everywhere the species has been studied. Hunting is known from several areas, and the threat of coastal development in remaining habitats is increasingly prevalent. Appropriate management interventions that limit habitat loss, bycatch and hunting are limited or entirely lacking across most of the range. In the absence of targeted and sustained conservation management efforts, the researchers conclude that the species will continue to decline.

Researchers add that several marine protected areas provide Atlantic humpback dolphins and other marine wildlife with important refuges that can provide marine managers with a foundation for complementary conservation efforts. This includes the recent creation of a marine protected area network in Gabon.

Howard Rosenbaum, Director of WCS’s Ocean Giants Program and a member of the IUCN Species Survival Commission’s Cetacean Specialist Group, said: “The new Critically Endangered listing will hopefully provide greater attention and resources to mitigate primary and cumulative threats faced by the Atlantic humpback dolphin, as well as proactive strategies for protecting the species and its vital habitats in key parts of the range.”

Randall Reeves, Chairman of the IUCN Species Survival Commission’s Cetacean Specialist Group, said: “Particularly in view of the impending extinction of the vaquita (a small porpoise endemic to Mexico’s Gulf of California) due entirely to overkill in fishing nets, we need to do a better job of not just assessing the present condition of riverine and coastal small cetaceans, but also of looking ahead and anticipating what is likely to happen to species like the Atlantic humpback dolphin unless current trends are reversed, and soon.”

All four species live in coastal habitats and face the same threats; entanglement in fishing nets, coastal development, ship strikes, and increasingly hunting. The Indian Ocean humpback dolphin is listed as “Endangered,” whereas the Indo-Pacific and Australian humpback dolphins are both listed as “Vulnerable.”

Caption: A group of scientists now considers the Atlantic humpback dolphin to be among Africa’s most endangered mammals. 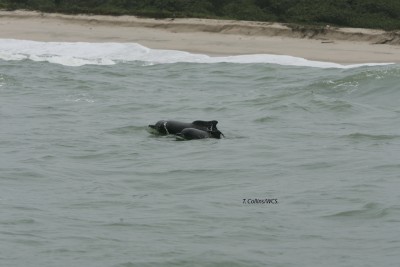