When a Bad Thing Becomes Good: Was Inflammation Modified to Become Implantation in Placental Mammals? 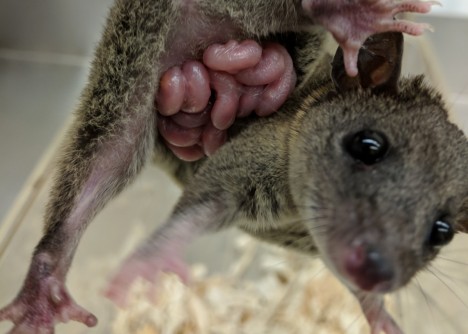 Newswise — In the darkness of its hidden burrow, a female rabbit shudders and shakes through the birth of her six new kits. They are tiny and hairless and blind for almost ten days, completely vulnerable outside the nest and away from their mother’s care. But inside the den and fed with rich milk, the kits soon open their eyes, grow fur, and eventually emerge into the world equipped to survive in their new environment.

Unlike their marsupial relatives, who use short pregnancies and long periods of development in an external pouch, placental mammals like the rabbit use a reproductive strategy of relatively long pregnancies to increase the fitness of their newborn young. To do this, mammals evolved a strategy to maintain the placenta surrounding their young through a process called implantation.

Implantation occurs when the placenta surrounding an embryo comes into contact with the uterine lining shortly after conception. Upon contact, the placenta erodes the endometrial tissue and initiates an inflammatory process. Generally, inflammation during pregnancy can be harmful to unborn young, but implantation is a key event in the gestation of placental mammals. Without implantation, the fetus cannot receive nourishment and proceed through the next phases of development, including birth. So how is it that implantation, a key component of pregnancy, initiates inflammation without harming the fetus itself? This inflammation paradox is the mystery that Arun Chavan, a PhD student at Yale University, and his collaborators sought to solve.

Chavan hypothesized that ancestral placental mammals somehow harnessed this inflammatory process and altered it to allow for longer gestation. Other research has shown that certain aspects of inflammation are ‘turned off’ that allow for implantation and the maintenance of pregnancy. But exactly how this happens has remained a mystery. To discover whether the evolutionary success of implantation resulted from the modification of inflammation, Chavan used comparative transcriptomics to study four placental mammals (the hyrax, tenrec, rabbit, and armadillo) and one marsupial, the opossum. For each of these animals, he collected the uteri of pregnant and non-pregnant females. He evaluated gene expression during pregnancy and looked for genes that behaved similarly in placental mammals, but differently in the opossum. By comparing placental mammal and marsupial gene expression, Chavan was able to identify differences between implantation and traditional inflammation.

Normally, inflammation happens when cells are exposed to a foreign substance like a virus and an immune response cascade is initiated. This cascade eventually leads to destruction of the foreign substance, which is mediated by white blood cells, T cells, or immune proteins. From his work on transcriptomics, Chavan discovered that in pregnant mammals, cytokine interleukin 17A (IL17A), a signaling molecule secreted by T cells during the inflammatory process, was suppressed during implantation. He hypothesized that by blocking IL17A expression, aspects of inflammation (like the typical influx of white blood cells) were prevented that could otherwise have led to initiation of the birth process or fetal death.

So how were placental mammals able to block IL17A expression and ultimately prolong pregnancy? Chavan’s idea for an answer to this question was born from his long-standing interest in the evolutionary origin of new cell types. Around the same time as implantation originated, a new uterine cell type unique to placental mammals arose: decidual cells. Perhaps these decidual cells were responsible for blocking cytokine expression, and, therefore, their development coincided with the origination of implantation. By using in vitro, human cell line culture assays, Chavan was able to verify that decidual cells do actively suppress the expression of IL17A by T cells.

From inflammation that would be harmful to fetal development, placental mammals were able to alter and harness this process for good: to promote implantation, increase the length of pregnancy, and improve fitness of young after birth. Through knowledge of the origins of implantation and how decidual cells influence this process, Chavan and his collaborators hope to provide insight into what is often the limiting step in mammalian pregnancies. By understanding the implantation process and its origins, physicians and researchers will be able to improve in-vitro fertilization techniques and medications to increase implantation rates and the success of full-term pregnancies in humans.

This research will be presented at the 2018 Annual Meeting of the Society for Integrative and Comparative Biology in San Francisco, California.