When Germs Attack: A Lens Into The Molecular Dance 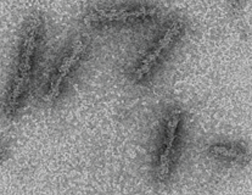 Newswise — Researchers at Johns Hopkins have zoomed in on what is going on at the molecular level when the body recognizes and defends against an attack of pathogens, and the findings, they say, could influence how drugs are developed to treat autoimmune diseases.

The focus of the research is a pathogen “sensor” known as human IFN inducible protein-16 or IFI16, one of the body’s key responders to viruses and bacteria, including herpes, HIV, listeria and salmonella. When IFI16 goes awry, it can prod the immune system to attack its own cells, triggering autoimmune disorders such as lupus and Sjögren syndrome (in which the glands that produce tears and saliva are destroyed). By figuring out how IFI16 operates, biophysicist Jungsan “Jay” Sohn, Ph.D., and his team say they have set the stage for finding ways to stop or limit the damage.

For the study, described online at the Proceedings of the National Academy of Science Early Edition in December, the Hopkins team used high-powered microscopy to show that these sensor proteins of the human immune system assemble into strands to signal infection. This strand-forming appears in other pathogen sensors, suggesting that this may be a common host defense mechanism.

“By understanding how IFI16 works at this fine molecular level, we may be able to boost this activity to build up immunity or taper down this activity to correct autoimmune disorders,” says Sohn, an assistant professor of biophysics and biophysical chemistry.

Sohn and his research team first generated genetically engineered IFI16 from bacteria and exposed it to synthetic DNA sequences of varying lengths to see how the protein might react to “foreign,” pathogenic DNA. They then observed the IFI16 and DNA interact via electron microscopy. What they saw was surprising.

The team expected that IFI16, like other pathogen sensors, would react to foreign DNA if it is long enough to accommodate just one IFI16 molecule. But IFI16 didn’t react strongly until the synthetic DNA fragments exceeded 60 base pairs in length, which can accommodate about four IFI16 molecules. It was as if a light went on when the “invading” DNA reached 70 to 100 base pairs, Sohn says. “We call that switch-like behavior.”

IFI16’s preference for long DNA strands explains a longstanding mystery, according to Sohn. Researchers, he explains, have wondered how our bodies’ immune systems mostly avoid “friendly fire,” or being sent into overdrive and attacking themselves. The new experiments suggest that the length of DNA could be the key: Our DNA is packaged such that there are only short exposed fragments, and IFI16 won’t activate in the presence of short DNA, but will in the presence of pathogenic DNA, which typically expose much longer strands.

“What we found suggests that the sensor uses the length of the naked DNA as a molecular ruler to distinguish self from non-self,” Sohn says.

Subsequently, Sohn and his team investigated how a sensor like IFI16 was attracted to such long DNA. They found that IFI16 molecules line up along long pathogenic DNA strands to form chains, or filaments. The longer the naked DNA, the longer the chain. What’s more, chains of IFI16 then line up and merge to create an even longer chain.

But that left the question of how IFI16 molecules were able to find each other and align. In another set of experiments, the team showed that IFI16 contains three protein parts — HinA, HinB and PYD — and when they broke up PYD, the chain failed to form.

What was surprising, he says, is that PYD doesn’t bind directly to the pathogen’s DNA. Rather, the Hin domains on IFI16 bind to the DNA, which makes the PYD domains gravitate toward one another. As a result, the PYDs glom together to form a powerful scaffold.

Sohn says his work suggests that the PYD-PYD interaction is very specific and a great potential drug target.

"It's really difficult to develop a drug that's targeting something that binds non-specifically. But PYD-PYD interaction is specific, and it only happens when it encounters DNA. It is what drives the stability of the complex. So if you can disintegrate that, it might alleviate autoimmune disorders,” Sohn says. Conversely, developing drugs that bolster the scaffold could enhance immunity, he adds. Additional authors on the paper include Seamus Morronea, Tao Wang, Leeza Constantoulakis, Richard Hooy and Michael Delannoy, all of The Johns Hopkins University.

This research was supported by Johns Hopkins School of Medicine startup funds.