When Push Comes to Injury: What Pushing a Wheelchair Does to Your Back 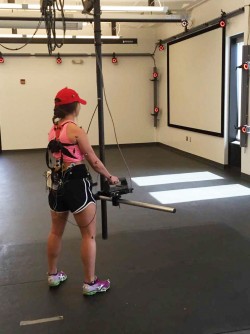 For a study at The Ohio State University, a volunteer performs a simulated wheelchair turning task. All subjects in the study pushed on a rig connected to an overhead braking system.

Newswise — COLUMBUS, Ohio—When you push someone in a wheelchair, you may be hurting your back without knowing it.

Researchers at The Ohio State University Spine Research Institute measured the forces on the spine caused by pushing a wheelchair, and discovered that people aren’t good at judging when they’re exerting forces strong enough to hurt their back.

The study appears in the journal Ergonomics.

When asked to push a simulated wheelchair against increasing resistance, study participants typically exceeded the recommended limits to avoid back injury by nearly 20 percent before they decided to quit.

There’s no specific ergonomic standard when it comes to pushing wheelchairs, explained William Marras, director of the institute and Honda Chair Professor of Integrated Systems Engineering at Ohio State. Caregivers can judge only whether they can push a patient based on how their back feels. And, with rising obesity, patients are getting heavier and harder to push.

“Today, patient handling is one of the most dangerous jobs for your back. It’s more dangerous than working in construction, more dangerous than mining or any of the other jobs we typically think of as difficult,” said Marras, citing data from the Bureau of Labor Statistics.

“We’ve studied the risks of lifting patients, but until now, nobody’s done a solid biomechanical assessment of what happens when you push patients in wheelchairs.”

Along with obesity rates in the United States, the average patient size has grown over decades. Wheelchairs are now offered in larger sizes to accommodate larger patients, but the basic design of the chair has stayed the same.

Based on the results of this study, there are simple design changes that could help make wheelchairs easier to push, the researchers said. If the handle height were adjustable, for instance, or the handles rotated 90 degrees to be more like a shopping cart, that would be a good start.

“We would also suggest building motor-assisted wheelchairs that could aid the person pushing when the pushing forces get too high,” said doctoral student Eric Weston, who performed the study for his master’s thesis.

For the study, 62 volunteers—31 men and 31 women, with an average age of around 25 years—pushed against a rig attached to an overhead braking system with adjustable resistance. The rig simulated the average height and placement of wheelchair handles. While the resistance started low, it increased until the volunteers felt like they couldn’t move the rig any farther. All the while, researchers measured the forces on the discs of their spine. The heaviest loads, though few participants reached them, corresponded to pushing patients weighing up to 485 pounds (220 kilograms).

The people in the study tended to keep pushing an average of 17 to 18 percent past the point where they should have stopped, based on the forces on their spine.

Pushing against a heavy object compresses the spine, and the National Institute for Occupational Safety and Health sets a compression limit at a little over 760 pounds of force (3,400 newtons) to prevent injury.

While pushing against the simulated wheelchair, male volunteers pushed past this limit about 34 percent of the time.

Weston said that “pushing heavy weights is risky for both men and women, but for different reasons.” Men can push loads that are heavy enough to hurt them, while women more quickly reach a point where they just can’t push any more.

Also among the findings: Turning a wheelchair is harder on the back than pushing in a straight line.

Turning the simulated wheelchair increased spinal forces by roughly 40 percent, because the volunteers had to stabilize their back using their core muscles while they pushed with one hand and pulled with the other.

“When you look at the part of the back that we’re concerned about—the disc—it doesn’t have a lot of nerve endings, so you couldn’t possibly know whether you’re doing damage or not. That’s why we wanted to do something quantitative,” Marras said.

This study shows that people won’t feel uncomfortable after they’ve exceeded the actual limits for avoiding injury by around 20 percent, he added.

This study was funded by the Spine Research Institute at Ohio State.