New UMD study suggests that everywhere tyrannosaurs rose to dominance, their juveniles took over the ecological role of medium-sized carnivores

New research from UMD shows ecology changed for tyrannosaurs as they grew up. Slender, agile young tyrannosaurs (left) hunted different prey and did so in a different fashion than the much larger, powerful jawed adults (right). 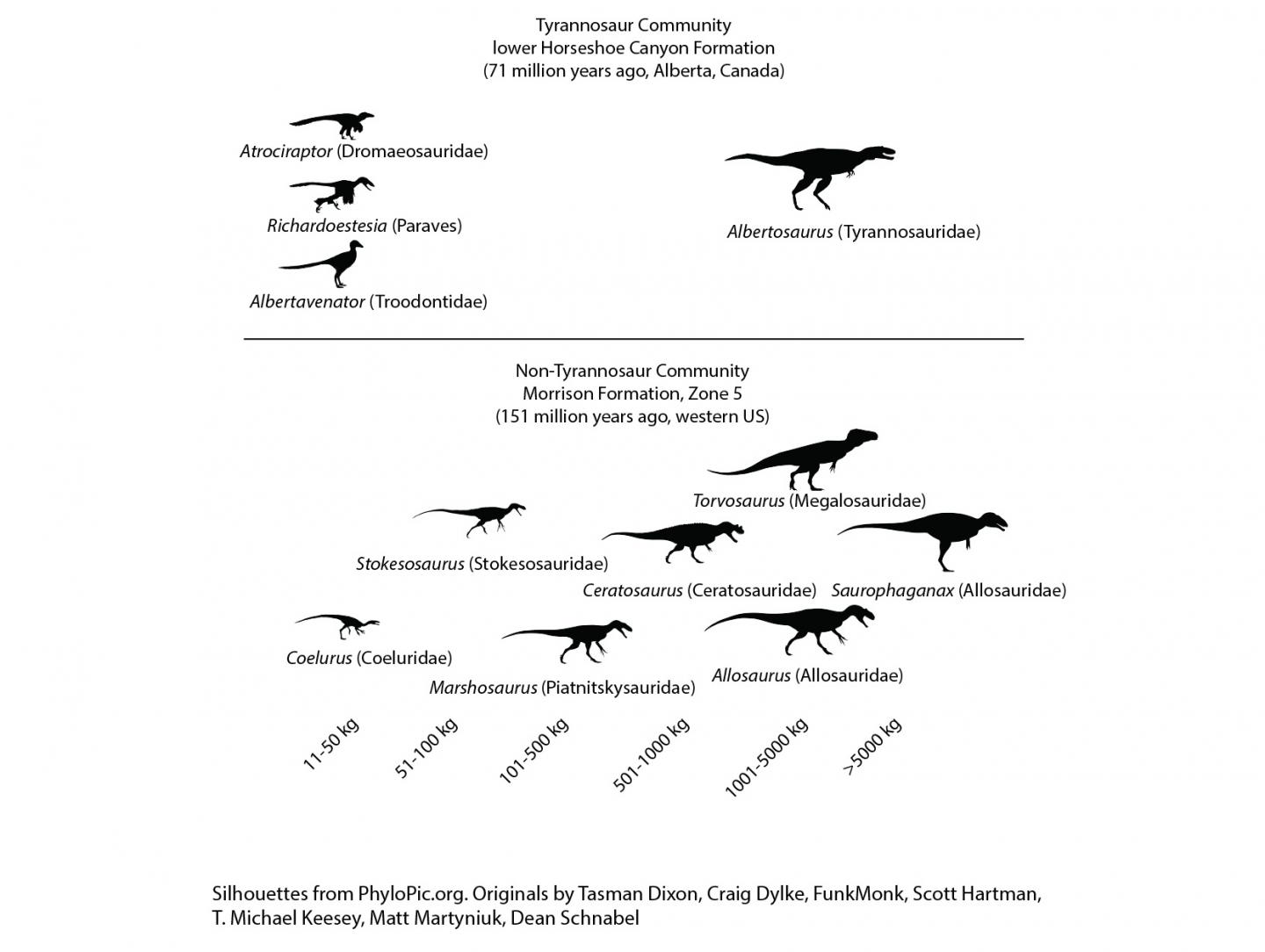 A new study shows that medium-sized predators all but disappeared late in dinosaur history wherever Tyrannosaurus rex and its close relatives rose to dominance. In those areas--lands that eventually became central Asia and Western North America--juvenile tyrannosaurs stepped in to fill the missing ecological niche previously held by other carnivores.

The research conducted by Thomas Holtz, a principal lecturer in the University of Maryland's Department of Geology, verified previous anecdotal reports of a dramatic drop-off in diversity of medium-sized predator species in communities dominated by tyrannosaurs. Diversity of prey species, on the other hand, did not decline. This suggests that medium-sized predators did not disappear because of a drop off in their prey, and that something else--likely young tyrannosaurs--stepped in to fill their ecological role. The study was published online on June 17, 2021, in the Canadian Journal of Earth Sciences.

"Earlier in the history of dinosaurs, in most communities you'd have a bunch of different types of carnivores of various size ranges from small fox-sized all the way up to the occasional giants," Holtz said. "Then something happens between 95 and 80 million years ago, where we see a shift. The really big carnivores, larger than an elephant, like tyrannosaurs and their kin, become the apex predators, and the middle-sized predators, say leopard to buffalo-sized carnivores, are either missing or very rare."

Previous work by Holtz and others provides evidence that young tyrannosaurs were faster and more agile than their parents and likely hunted prey more similar to that eaten by the faster, more agile medium-sized dinosaurs.

It is possible that as tyrannosaurs evolved and grew to dominance, their juveniles outcompeted other carnivorous dinosaurs in the middle-size range. But it is also possible that something else eliminated the other carnivores and tyrannosaurs simply stepped in to fill the gap. The shift to tyrannosaur dominance and the disappearance of middle-sized predators happened during a long gap in the fossil record, so scientists can't say exactly what occurred.

"Ultimately resolving that is going to rely on the most basic first-level aspect of paleontology, which is boots on the ground and picks in the sediments," Holtz said. "We need more sampling sites from this interval between about 95 and 80 million years ago."

To conduct the study, Holtz surveyed the existing record of 60 dinosaur communities--assemblages of animals living in the same area at the same time--from the Jurassic and Cretaceous periods (201 to 66 million years ago). First, he counted the number of carnivorous species and sorted them into size categories, with medium-sized dinosaurs weighing in at 50 to 1,000 kilograms and large dinosaurs exceeding 1,000 kilograms.

In the other 29 dinosaur communities Holtz surveyed, tyrannosaurs were the largest, and presumably dominant, predator weighing in at over 1,000 kilograms. In those communities, which were all found in Asia and North America, predators ranging from 50 to 1,000 kilograms were rare or absent during the latter half of the late Cretaceous period (80 to 66 million years ago).

"So, what does this mean?" Holtz asked. "In those communities where middle-sized predators are gone but the prey species are just as diverse, can we say that no one is preying upon these middle-sized prey? No. That's almost certainly not the case. It is quite likely juvenile tyrannosaurs took over the ecological role of the missing middle-sized carnivores."

Future studies will drill deeper into the composition of prey species communities to see if there were changes in prey size during the shift to tyrannosaur domination. Holtz also plans to survey the size distribution of carnivores during the Triassic period from 251 to 201 million years ago. Understanding changes in size distribution and species diversity may help paleontologists understand the influences that affect different types of predator and prey communities.

"These interactions are important for understanding what life was like during the time of the dinosaurs," Holtz said. "But in the broader sense, having more understanding of changing ecosystems, and in this case, looking at the predator and prey components of an ecosystem, gives us a better and more diverse view of how the interactions of life work in the world, even today.

Caption: New research from UMD shows ecology changed for tyrannosaurs as they grew up. Slender, agile young tyrannosaurs (left) hunted different prey and did so in a different fashion than the much larger, powerful jawed adults (right).