Where We Split from Sharks: Common Ancestor Comes Into Focus

Newswise — The common ancestor of all jawed vertebrates on Earth resembled a shark, according to a new analysis of the braincase of a 290-million-year-old fossil fish that has long puzzled paleontologists.

New research on Acanthodes bronni, a fish from the Paleozoic era, sheds light on the evolution of the earliest jawed vertebrates and offers a new glimpse of the last common ancestor before the split between the earliest sharks and the first bony fishes — the lineage that would eventually include human beings.

“Unexpectedly, Acanthodes turns out to be the best view we have of conditions in the last common ancestor of bony fishes and sharks,” said Michael Coates, PhD, professor of organismal biology and anatomy at the University of Chicago and senior author of the study published in Nature. “Our work is telling us that the earliest bony fishes looked pretty much like sharks, and not vice versa. What we might think of as shark space is, in fact, general modern jawed vertebrate space.”

The group gnathostomes, meaning “jaw-mouths,” includes tens of thousands of living vertebrate species, ranging from fish and sharks to birds, reptiles, mammals and humans. Cartilaginous fish, which today include sharks, rays, and ratfish, diverged from the bony fishes more than 420 million years ago. But little is known about what the last common ancestor of humans, manta rays and great white sharks looked like.

Coates and colleagues Samuel Davis and John Finarelli found answers to this mystery in an unexpected place: the acanthodians, extinct fishes that generally left behind only tiny scales and elaborate suites of fin spines. But armed with new data on what the earliest sharks and bony fishes looked like, Coates and colleagues re-examined fossils of Acanthodes bronni, the best-preserved acanthodian species.

Davis created highly detailed latex molds of specimens revealing the inside and outside of the skull, providing a valuable new data set for assessing cranial and jaw anatomy as well as the organizations of sensory, circulatory and respiratory systems in the species.

“We want to explore braincases if possible, because they are exceptionally rich sources of anatomical information,” Coates said. “They’re much better than scales, teeth or fin spines, which, on their own, tend to deliver a confusing signal of evolutionary relationships.”

The analysis of the sample combined with recent CT scans of skulls from early sharks and bony fishes led the researchers to a surprising reassessment of what Acanthodes bronni tells us about the history of jawed vertebrates.

“For the first time, we could look inside the head of Acanthodes, and describe it within this whole new context,” Coates said. “The more we looked at it, the more similarities we found with sharks.”

However, analysis of the evolutionary relationships of Acanthodes bronni — even with these new data added — still connected this species to early bony fishes. Meanwhile, some acanthodian species turned out to be primitive sharks, while others were relatives of the common ancestor of sharks and bony fishes.

This result explains some of the longstanding confusion about the placement of acanthodians in vertebrate history. But additional analyses went a step further. Using more than 100 morphological characters, the researchers quantified the mutual resemblance among the earliest jawed fishes. Acanthodians as a whole, including the earliest members of humans’ own deep evolutionary past, appear to cluster with ancient sharks.

“The common ancestors of all jawed vertebrates today organized their heads in a way that resembled sharks,” said Finarelli, PhD, Lecturer in Vertebrate Biology at University College Dublin. “Given what we now know about the interrelatedness of early fishes, these results tell us that while sharks retained these features, bony fishes moved away from such conditions.”

Furthermore, the analysis demonstrated that all of these early members of the modern gnathostomes are clearly separated from what now appear to be the most primitive vertebrates with jaws: a collection of armored fishes called placoderms.

“There appears to be a fundamental distinction between the placoderms and all other vertebrates with jaws,” Finarelli said.

This new revision of the lineage of early jawed vertebrates will allow paleontologists to dig into deeper mysteries, including how the body plan of these ancient species transformed over the transition from jawless to jawed fishes.

“It helps to answer the basic question of what’s primitive about a shark.” Coates said. “And, at last, we're getting a better handle on primitive conditions for jawed vertebrates as a whole.”

“This study is an example of the power of phylogenetics combined with the comparative morphology of living and fossil organisms,” said Maureen Kearney, program director in National Science Foundation’s Division of Environmental Biology, which co-funded the research. “It shows us important evolutionary transitions in the history of life, providing a new window into the sequence of evolutionary changes during early vertebrate evolution.”

The study, “Acanthodes and shark-like conditions in the last common ancestor of modern gnathostomes,” will be published on June 14 by Nature. The research was also funded by the Natural Environment Research Council.

For more news from the University of Chicago Medicine, follow us on Twitter at @UChicagoMed, or visit our Facebook page at facebook.com/UChicagoMed, our research blog at sciencelife.uchospitals.edu, or our newsroom at uchospitals.edu/news. 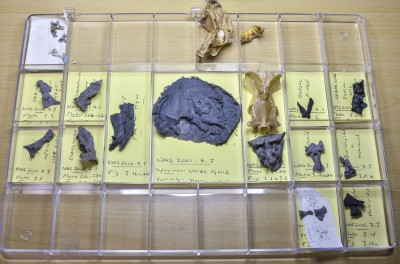