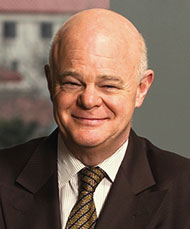 Newswise — Despite research showing that aggressive treatment with surgery, chemotherapy and radiation can extend the lives of and even cure patients with advanced bladder cancer, many don’t get it. The result, argues a team led by UC Davis Health urologists, is that the disease for many is still as deadly as it was 30 years ago.

Why doctors are not treating these patients with an intent to cure is complicated. But UC Davis Health Distinguished Professor Emeritus Ralph de Vere White, first author on a paper published today in Journal of Clinical Oncology, argues it’s a problem that can – and must – be solved.

De Vere White and his co-authors examined data from multiple studies and concluded that more than half of the MIBC patients receive no treatment with an intent to cure their disease. These treatments would be chemotherapy followed by a complete surgical bladder removal, also called a cystectomy. Another approach would be a transurethral resection of the bladder, a less invasive procedure in which a surgeon uses instruments to look inside the bladder and remove tumors, plus chemotherapy and radiation treatment, also called trimodal therapy.

The 5-year survival rate for bladder cancer patients has remained unchanged at about 35% for decades, and yet recent studies show much better survival for bladder cancer patients who receive treatment with an intent to cure. One 2018 study, for example, showed 79% of patients survived at least 10 years after radical cystectomies and 69% survived at least 10 years after tri-modal therapy.

The authors argue that the reason for the disparity is that far too few patients are getting treated. One study, for example, showed that of 28,691 MIBC patients in the National Cancer Database only 41.3% had a radical cystectomy and 7.6% received radiation therapy. The authors note that patients treated at centers with high volumes of MIBC were more likely to get the recommended treatment.

Why so few patients get treated relates, in large part, to the fact that cystectomy is a costly and complex surgery that can result in complications and lead to emergency room visits, hospital readmission and death. Many patients also don’t want or cannot afford to travel long distances to centers that perform the operation, and their local hospitals or clinics don’t want to deal with post-operative complications. In addition, the authors write, “there may be considerable confusion among urologists, radiation therapists and medical oncologists on how best to select patients” for the optimal treatment approaches.

The paper’s authors also cited results of a survey of urologists who treat advanced bladder cancer, which found that while 91% said they followed guidelines when treating the most common form of this disease, which has not invaded the bladder wall, only 15 percent of people with the disease in the U.S. actually undergo treatment that follows national guidelines.

“I think it’s a perfect storm,” said de Vere White, adding that bladder cancer is on the rise due to the aging population. Smoking is also major risk factor for the disease.

De Vere White and his co-authors suggest that the hospitals and health systems considered bladder cancer “centers of excellence” partner with smaller centers, community practices and individual providers to ensure their patients receive the most effective therapy possible. This approach, endorsed by the Society of Urological Oncology, should be led by an interdisciplinary team from various national urology, medical oncology and radiation oncology professional organizations.

Other authors on the paper include Primo N. Lara, Jr., Christopher P. Evans and Marc Dall’Era, of UC Davis Health and Peter C. Black of Vancouver Prostate Centre at the University of British Columbia.