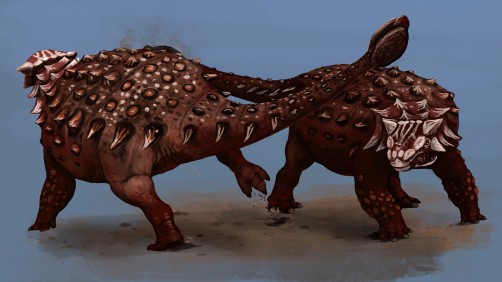 “Weapons like tail clubs and bony spikes are found only in a few extinct animals – such as ankylosaurs, glyptodonts (large extinct armadillos) and in some ancient turtle species,” says Victoria Arbour, former postdoctoral student at NC State, current postdoctoral fellow at the Royal Ontario Museum and corresponding author of a paper describing the research. “These same weapons just don’t occur in modern-day animals, and we wanted to know why they were so rare even in the fossil record.”

Study co-author Lindsay Zanno, professor of biological sciences at NC State and head of paleontology at the NC Museum of Natural Sciences, agrees, “We kicked off this study with a simple observation: most animal weapons used for combat are located on the most critical part of the body for survival, the head, as opposed to more expendable ones such as the tail. Why, we asked, wasn’t evolution producing more animals with weaponized tails, when this would seem to be far less dangerous?”

To answer this question, Arbour and Zanno looked at a data set of 286 amniote species, both living and extinct, to see if there were patterns that pointed to the evolution of three specific types of tail weapons: bony spikes, a stiff tail or a bony knob at the tip of the tail. Amniotes refer to backboned, four-legged reptiles and mammals, as well as birds.

In the case of bony tail weaponry, the researchers found the animals had four things in common. First, they were usually large, weighing over 200 pounds (or 100 kilograms) – about the weight of the glyptodonts that used to roam South America or a living mountain goat – or were over three feet (a meter) long.

Second, armor was key. Ancient turtles, armadillos and armored dinosaurs were covered in some sort of hard carapace or bony plated armor. Thoracic stiffness – referring to a body that doesn’t bend side to side easily, perhaps so that it could easily counteract the forces needed to swing a large clubbed or spiked tail – was also important. Finally, every animal in the fossil record that developed elaborate tail weaponry was an herbivore, or vegetarian.

“It’s rare for large herbivores to have lots of bony armor to begin with,” Arbour says, “and even rarer to see armored species with elaborate head or tail ornamentation because of the energy cost to the animal. The evolution of tail weaponry in Ankylosaurus and Stegosaurus required a ‘perfect storm’ of traits that aren’t seen in living animals, and this unique combination explains why tail weaponry is rare even in the fossil record.”

Zanno continues, “This study is an elegant example of how the fossil record can be used to better understand the world around us today.”

The research appears in Proceedings of the Royal Society B. The research was funded in part by the Jurassic Foundation.

“The evolution of tail weaponization in amniotes”

Abstract:
Weaponry, for the purpose of intraspecific combat or predator defense, is one of the most widespread animal adaptations, yet the selective pressures and constraints governing its phenotypic diversity and skeletal regionalization are not well understood. Here we investigate the evolution of tail weaponry in amniotes, a rare form of weaponry that nonetheless evolved independently among a broad spectrum of life including mammals, turtles, and dinosaurs. Using comparative methods, we test for links between morphology, ecology, and behaviour in extant amniotes known to use the tail as a weapon, and in extinct taxa bearing osseous tail armaments. We find robust ecological and morphological correlates of both tail lashing behaviour and bony tail weaponry, including large body size, body armor, and herbivory, suggesting these life history parameters factor into the evolution of antipredator behaviours and tail armaments. We suggest that the evolution of tail weaponry is rare because large, armoured herbivores are uncommon in extant terrestrial faunas, as they have been throughout evolutionary history.