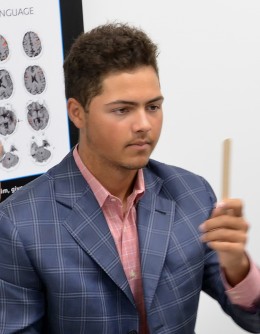 Newswise — Why do some youngsters bounce back quickly from a traumatic brain injury, while others suffer devastating side effects for years?

New UCLA/USC research suggests that damage to the fatty sheaths around the brain’s nerve fibers--not injury severity-- may explain the difference. Published in the July 15 edition of the Journal of Neuroscience, the finding identifies possible biomarkers that physicians could use to predict higher-risk patients who require closer monitoring.

The study is the first to combine imaging scans with recording of the brain’s electrical activity to reveal how damage to the protective coating around the brain’s circuitry affects how quickly children and teens can process and recall information after a concussion or other head trauma.

“Just as electricians insulate electrical wires to shield their connections, the brain’s nerve fibers are encased in a fatty tissue called myelin that protects signals as they travel across the brain,” explained Dr. Christopher Giza, director of the UCLA Steve Tisch BrainSPORT Program and a professor of pediatrics and neurosurgery at UCLA’s David Geffen School of Medicine and Mattel Children’s Hospital. “We suspected that trauma was damaging the myelin and slowing the brain’s ability to transmit information, interfering with patients’ capacity to learn.”

To test their hypothesis, the scientists assigned a series of mental tasks to 32 youngsters ages 8 to 19. Each had suffered a moderate to severe brain injury in the past five months. The tests evaluated the children’s processing speed, short-term memory, verbal learning and cognitive flexibility.

The UCLA team recorded the kids’ brains’ electrical activity to test how quickly their nerve fibers could transmit information, and then imaged the wiring to assess its structural soundness.

When the scientists compared the patients’ results to those of a matched control group of 31 healthy children, they discovered dramatic differences.

Half of the brain-injury group showed widespread damage to the myelin insulating their brain’s circuitry. These patients performed 14 percent more poorly on the cognitive tests and their wiring worked three times slower than healthy children’s.

Scans of the other 16 patients in the brain-injury group showed their myelin was nearly intact; and their brains were able to process information as quickly as healthy children’s. They performed 9 percent better on the cognitive tasks than the youngsters with more myelin damage, though not as well as the uninjured kids.

“Our research suggests that imaging the brain’s wiring to evaluate both its structure and function could help predict a patient’s prognosis after a traumatic brain injury,” said first author Emily Dennis, a postdoctoral researcher at USC’s Keck School of Medicine.

“Our next step will be to explore how brain biomarkers change during a patient’s first year of recovery when most people recapture some cognitive function,” said principal investigator Robert Asarnow, a professor of psychiatry and psychology at UCLA’s Semel Institute for Neuroscience and Human Behavior and College of Letters and Science.

Traumatic brain injury is the single most common cause of death and disability in children and teens, according to the U.S. Centers for Disease Control.