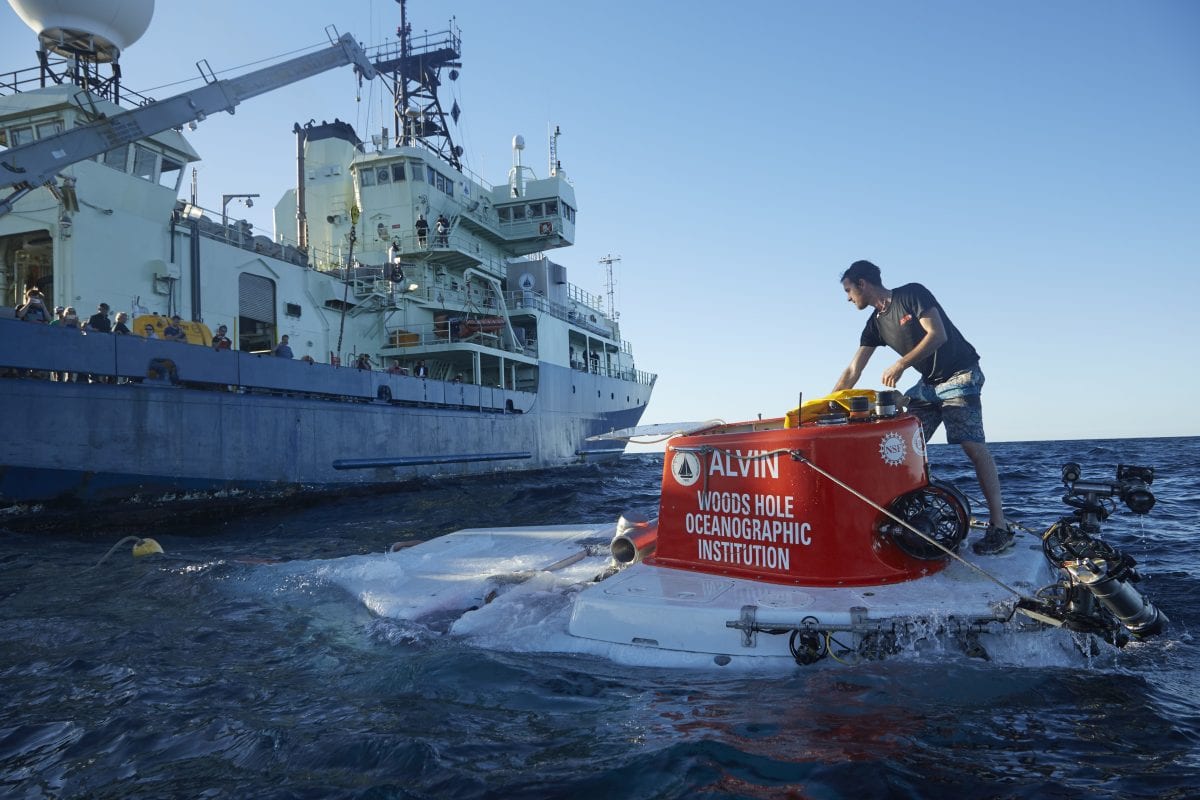 An Alvin team member prepares the sub for recovery after its 5000th dive in November 2018.

Increased depth range and the ability to explore 99% of the ocean floor, including the abyssal region—one of the least understood areas of the deep sea—are just some of the upgrades underway for the iconic human-occupied Vehicle (HOV) Alvin that were unveiled today at the American Geophysical Union’s (AGU) Fall Meeting 2020. Researchers from Woods Hole Oceanographic Institution (WHOI), Portland State University, and National Oceanic and Atmospheric Administration (NOAA) shared details on the upgrades, the importance of human exploration of the deep ocean, and what new science questions they hope to answer when Alvin dives again in September 2021.

Alvin is one of the most recognized deep submergence vessels in the world and the only one in the U.S. capable of carrying humans into extreme ocean depths. The sub has completed 5,065 successful dives, more than all other submersible programs worldwide combined. When Alvin relaunches next fall, the iconic sub will have the ability to dive to 6500 meters (21,325 feet)—almost 4 miles deep and 2,000 meters deeper than Alvin’s current maximum depth of 4500 meters (14,800 feet). The upgrade will also give the sub access to 99% of the ocean floor.

Alvin was commissioned in 1964 and is named after WHOI physicist and oceanographer Allyn Vine, who was an early proponent of U.S investment deep-sea submersibles. The original Alvin was only rated for depths up to 1,829 meters (6,000 feet), but advancements in syntactic foam, a specialized material that can provide buoyancy at great depth, provided access to greater depths. As this and other technologies have improved, the scope of Alvin’s capabilities have also expanded. When this latest overhaul is completed, Alvin will enable in-person study of the lower Abyssal Zone and the upper Hadal Zone—one of the least-understood parts of the deep sea and home to high-temperature hydrothermal vents, submarine volcanoes, subduction trenches, mineral resources, and more. This will also give the science community an unprecedented opportunity to visit a critically under-studied part of the planet that plays a role in carbon and nutrient cycling and that will offer a view into how life might be evolved to conditions in oceans beyond Earth.

Alvin is the only publicly funded, human-occupied vehicle available to the U.S. scientific community for exploring the abyssal region in-person. To date, 3,076 researchers have shared a firsthand experience unlike any other in science, allowing in-situ data and sample collection and direct observation of the seafloor and water column on dives lasting up to 10 hours.

Chad King is a research specialist at NOAA’s Monterey Bay National Marine Sanctuary (MBNMS) in California who made his first dive in Alvin in March 2019 to a part of the sanctuary now known as the Octopus Garden.  It was the first visit to this area after its discovery in 2018, and data collected by King in Alvin that confirmed that warm water was seeping from the seafloor, something the mother octopuses appeared to be using to incubate their eggs. The dive also documented the first hatching of baby octopus at this site, proving that it was a viable nursery.

“It was a remarkable experience to be able to see, for the first time, these animals mere feet away, in three dimensions, and to give context to the surrounding environment,” said King. “It's an experience I will never forget.”

According to Adam Soule, the sub is also an important tool for fostering new generations of scientists. “Sometimes the sub is viewed as inaccessible to early-career scientists or those who haven’t used it yet,” he said. “That is not true. If someone has a good idea and they want to use Alvin, they will get to use Alvin. The increased range and scope will be incredibly helpful in an environment where we know very little and have to use our observation skills to decide where to go and what samples to collect.”

Additional upgrades to Alvin include:

Based at WHOI, the Alvin Group is funded by the National Science Foundation (NSF), U.S. Navy, and NOAA. The group supports all aspects of the sub’s operations, including maintaining and piloting the sub while at sea, integrating new scientific sensors and instruments for specific missions to keep the sub at the forefront of ocean exploration and discovery, and designing and building new parts during each overhaul. Along with Alvin, NDSF operates remotely operated vehicle (ROV) Jason, and autonomous underwater vehicle (AUV) Sentry for the ocean science community.

Verification testing dives on Alvin are scheduled to begin in the Puerto Rico trench in September 2021.

Link to hi res images and video is here: https://go.whoi.edu/alvin-agu