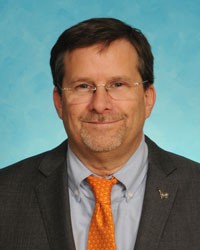 WVU's Marc Haut is researching the link between Fentanyl and amnesia.

[Editor’s Note: Citation is below.]

Newswise — MORGANTOWN, W.Va.— A case report by a West Virginia University neuropsychologist suggests a new reason fentanyl—alone, or in combination with stimulants—may put substance users at risk, whether they take it knowingly or not. It may cause amnesia.

Buying opioids on the street “isn’t like buying Tylenol,” said Marc W. Haut, chair of the WVU School of Medicine’s Department of Behavioral Medicine and Psychiatry. “You don’t know what you’re buying. People may think they’re buying something that’s just an opiate, but it may have fentanyl in it, and it may have cocaine.”

His findings are published in the current issue of the Annals of Internal Medicine.

Fentanyl is an especially potent, synthetic opioid. Between 50 and 100 times stronger than morphine, it puts users at an increased risk of overdose.

Haut’s case report is the first to link fentanyl use with a particular form of amnesia that comes on suddenly and produces distinctive MRI results.

Haut’s collaborator Jed Barash, medical director at Soldiers’ Home in Burlington, Massachusetts, previously detected a cluster of this form of amnesia among substance users in Massachusetts. Now Haut, Baresh and Haut’s WVU colleagues have used laboratory testing and neuroimaging to support the theory that fentanyl use may trigger amnesia in some individuals.

Further study will be required to confirm the fentanyl–amnesia link in a larger population and pinpoint the mechanisms behind it. The amnesia’s typical duration and frequency are also unknown.

“A lot of people who have these overdoses are marginalized in society, so they may be pretty impaired, but we just don’t have a sense of it,” Haut said. “If this is one in fifty cases, that’s one thing. If it’s one in ten, then it’s more meaningful. However, even one in fifty cases would be a lot, given how many overdoses are still occurring in the U.S.”

Amnesia can have serious implications for those in recovery. Benefiting from a treatment program requires a functioning memory.

Title: An Unusual Amnestic Syndrome Associated With Combined Fentanyl and Cocaine Use