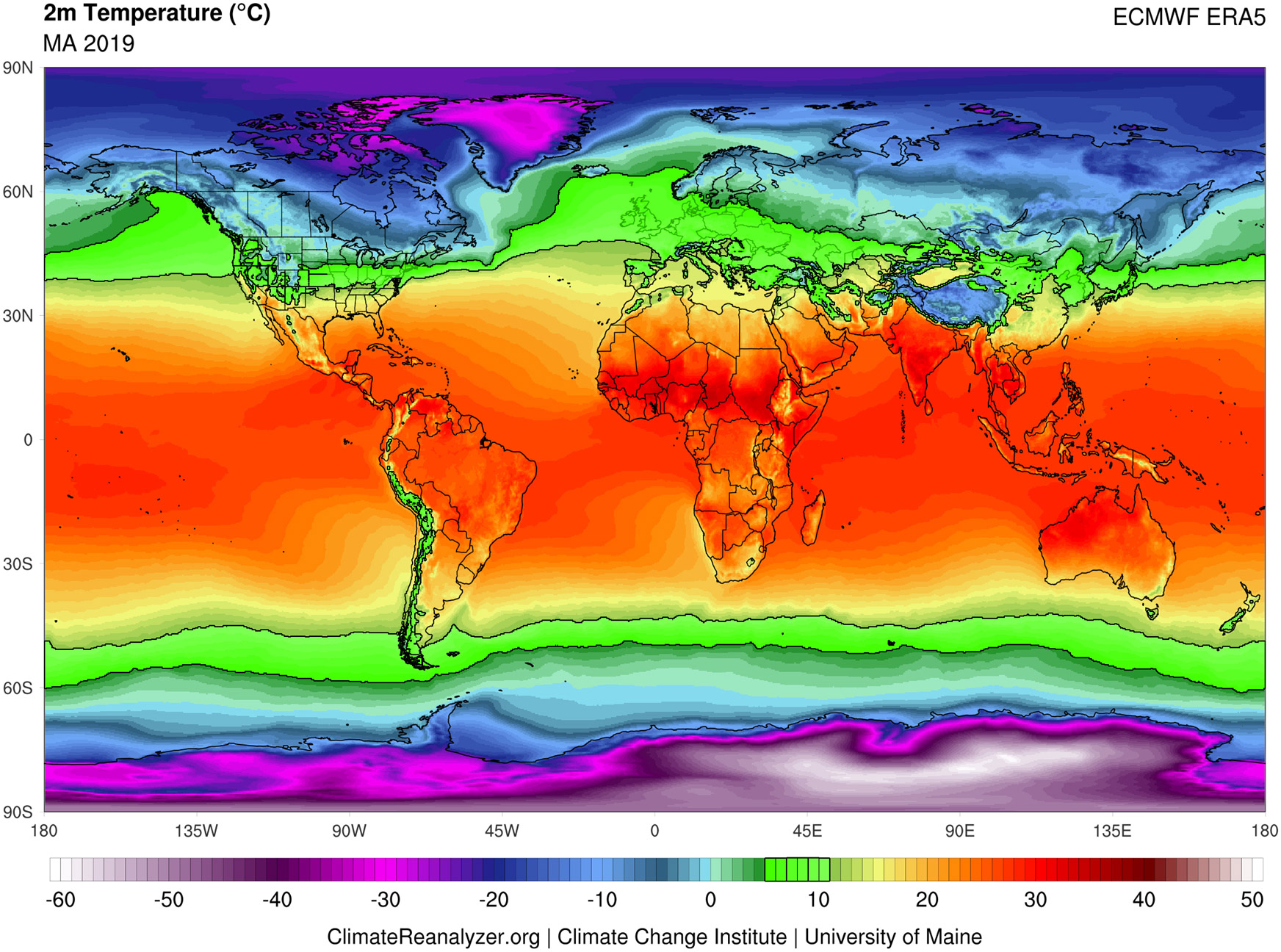 This map reflects average temperature data from March 2019 to April 2019 to predict the at risk zone for community transmission of COVID-19. The zone at risk for significant community spread in the near-term include land areas within the green bands, outlined in dark black but may change based on actual average temperatures in 2020 during this time period.

Newswise — Researchers at the University of Maryland School of Medicine’s Institute of Human Virology (IHV), which is part of the Global Virus Network (GVN), predict that COVID-19 will follow a seasonal pattern similar to other respiratory viruses like seasonal flu. They base this on weather modeling data in countries where the virus has taken hold and spread within the community.

In a new paper published on the open-data site SSRN, the researchers found that all cities experiencing significant outbreaks of COVID-19 have very similar winter climates with an average temperature of 41 to 52 degrees Fahrenheit, an average humidity level of 47 to 79 percent with a narrow east-west distribution along the same 30-50 N” latitude. This includes Wuhan, China, South Korea, Japan, Iran, Northern Italy, Seattle, and Northern California. It could also spell increasing trouble for the Mid-Atlantic States and -- as temperatures rise -- New England.

“Based on what we have documented so far, it appears that the virus has a harder time spreading between people in warmer, tropical climates,” said study leader Mohammad Sajadi, MD, Associate Professor of Medicine at the Insitute of Human Virology at the UMSOM and a member of GVN. “That suggests once average temperatures rise above 54 degrees Fahrenheit (12 degrees Celsius) and higher, the virus may be harder to transmit, but this is still a hypothesis that requires more data.”

The team based its predictions on weather data from the previous few months as well as typical patterns from last year to hypothesize on community spread within the next few weeks. “Using 2019 temperature data for March and April, risk of community spread could be predicted to occur in areas just north of the current areas at risk,” said study co-author Augustin Vintzileos, PhD, Assistant Research Scientist in the Earth System Science Interdisciplinary Center at the University of Maryland, College Park. He plans to do further modeling of current weather data to help provide more certainty to the predictions.

“I think what is important is this is a testable hypotheses,” said study co-author Anthony Amoroso, MD, UMSOM Associate Professor of Medicine and Associate Chief of Infectious Diseases who is also Chief of Clinical Care Programs for IHV. “And if it holds true, could be very helpful for health system preparation, surveillance and containment efforts.”

In areas where the virus has already spread within the community, like Wuhan, Milan, and Tokyo, temperatures did not dip below the freezing mark, the researchers pointed out. They also based their predictions on a study of the novel coronavirus in the laboratory, which found that a temperature of 39 degrees Fahrenheit and humidity level of 20 to 80 percent is most conducive to the virus’s survival.

Dr. Gallo is a co-founder of the Global Virus Network, which is a consortium of leading virologists spanning 53 Centers of Excellence and nine Affiliates in 32 countries worldwide, working collaboratively to train the next generation, advance knowledge about how to identify and diagnose pandemic viruses, mitigate and control how such viruses spread and make us sick, as well as develop drugs, vaccines and treatments to combat them. The Network has been meeting regularly to discuss the COVID-19 pandemic sharing their expertise in all viral areas and their research findings.

“This study raises some provocative theories that, if correct, could be useful in helping to direct public health strategies,” said UMSOM Dean E. Albert Reece, MD, PhD, MBA, who is also University Executive Vice President for Medical Affairs and the John Z. and Akiko K. Bowers Distinguished Professor. “Perhaps we should be conducting heightened surveillance and expending more resources into areas that currently have the climate that is conducive to community virus spread.”

About the Global Virus Network (GVN)

The Global Virus Network (GVN) is essential and critical in the preparedness, defense and first research response to emerging, exiting and unidentified viruses that pose a clear and present threat to public health, working in close coordination with established national and international institutions. It is a coalition comprised of eminent human and animal virologists from 53 Centers of Excellence and nine Affiliates in 32 countries worldwide, working collaboratively to train the next generation, advance knowledge about how to identify and diagnose pandemic viruses, mitigate and control how such viruses spread and make us sick, as well as develop drugs, vaccines and treatments to combat them. No single institution in the world has expertise in all viral areas other than the GVN, which brings together the finest medical virologists to leverage their individual expertise and coalesce global teams of specialists on the scientific challenges, issues and problems posed by pandemic viruses. The GVN is a non-profit 501(c)(3) organization. For more information, please visit www.gvn.org. Follow us on Twitter @GlobalVirusNews

About the Institute of Human Virology

Formed in 1996 as a partnership between the State of Maryland, the City of Baltimore, the University System of Maryland and the University of Maryland Medical System, IHV is an institute of the University of Maryland School of Medicine and is home to some of the most globally-recognized and world-renowned experts in all of virology. The IHV combines the disciplines of basic research, epidemiology and clinical research in a concerted effort to speed the discovery of diagnostics and therapeutics for a wide variety of chronic and deadly viral and immune disorders - most notably, HIV the virus that causes AIDS. For more information, www.ihv.org and follow us on Twitter @IHVmaryland.