The director of NIH visits UAB as COVID-19 appears 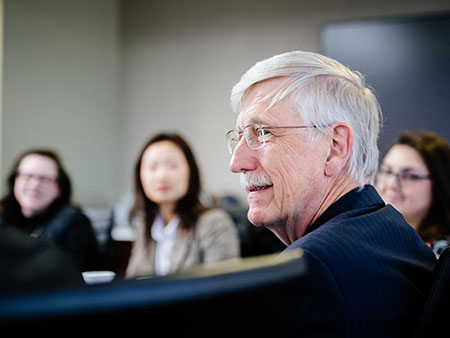 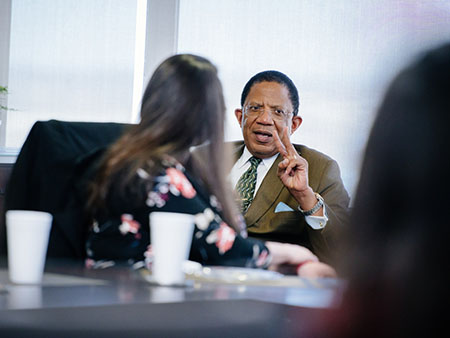 Newswise — BIRMINGHAM, Ala. – Francis Collins, M.D., Ph.D., director of the National Institutes of Health, flew to Birmingham on Thursday, March 5, to start a long-anticipated visit to the University of Alabama at Birmingham. Collins soon learned he had a problem back home.

Maryland public health officials were reporting the first two cases of COVID-19 in Montgomery County, Maryland, where the NIH sits. For Collins, that meant concern for the safety of the 25,000 people who work at the NIH and continuity of its vital work in biomedical and public health research.

So, Friday, March 6, became a give-and-take day for Collins. Calls to the NIH and his planned UAB schedule would take turns throughout the day, and meetings with UAB students, researchers and leaders would be trimmed to give time for those calls. Collins wakened at 4 a.m. for his first call in his hotel room, and he was 15 minutes late for his 7 a.m. breakfast with UAB junior faculty.

“Sorry to be a few minutes late,” Collins told the 21 UAB researchers. “Blame it on the coronavirus.”

Despite his concern about the novel coronavirus in Maryland, Collins took time to learn all he could about UAB, the Birmingham biomedical research powerhouse that has the 10th-highest NIH funding of all public universities in the United States.

“I am eager to meet with you,” he told the junior faculty. “UAB is one institution we are particularly interested in seeing flourish.”

The NIH does research on its Bethesda, Maryland, campus, but also invests the bulk of its $41 billion budget on biomedical and public health research across the United States. The NIH already has strong bipartisan support in Congress, and the challenge of the current COVID-19 emergency will only heighten public recognition of the NIH and the universities it supports.

“It will be serious”
At 8:15 a.m., Collins began his keynote address to a standing-room-only audience in Margaret Cameron Spain Auditorium. He started by sharing the steps NIH researchers are taking to tackle COVID-19. While Alabama was still a week away from its first confirmed COVID-19 case, Collins told UAB students, faculty and physicians, “I will be amazed if you don’t have a case in the next week or two.”

“We have things coming at us with COVID-19,” he said. “We think the death rate will be about 1 percent, which is 10 times more than flu. It will be serious.”

In basic research, scientists are looking at the spike protein that protrudes from the virus like the points on a coronet crown. Those spike proteins are like keys the novel coronavirus uses to penetrate a human lung cell. Once inside, the virus replicates madly to make many copies, which are released when the lung cell dies. Scientists, Collins said, have already determined the atomic structure of the spike protein of the novel coronavirus, and they are researching ways to block its interaction with lung cell receptors.

In therapeutics, Collins said, UAB has played a critical role. An experimental drug called remdesivir, developed in part by UAB researcher Richard Whitley, M.D., Distinguished Professor of Pediatrics, in response to the MERS outbreak, is being tested in small trials in China and Nebraska.

In vaccines, Collins said, an experimental mRNA vaccine will begin Phase I safety tests in early April. But any vaccines for COVID-19, he cautioned, are realistically a year or more away. Clinicians must first run larger Phase II efficacy trials, and then pharmaceutical companies face a huge ramp-up to produce enough units for the general population. These steps each take many months, even though the need is urgent.

Collins spent most of his keynote address describing 10 areas of research he feels will yield major breakthroughs in human health and biomedical knowledge during the coming decade. After Q&A time with the audience, UAB University Relations staff whisked Collins to a stand-up press conference with Birmingham television news crews.

Collins told the reporters we are in an exciting time for biomedical research, including research at UAB, which currently has $328 million of NIH funding, which is 93 percent of the total $350 million of NIH funding in Alabama. “As I go around UAB and talk to people,” Collins said, “I get to feeling very good about how our money is spent. UAB is very strong, and growing stronger.”

But reporters’ questions focused on coronavirus. Collins said the virus would come to Alabama in a short time. He explained how a vaccine will take not less than a year to develop and deploy. He told them how transmissible the novel coronavirus is, using the Diamond Princess cruise ship as an example.

A place of hope
Collins spent the rest of his UAB visit hearing research presentations from senior faculty, having lunch with graduate students and postdoctoral fellows, including M.D./Ph.D. students, and discussing strategic directions with UAB research leaders. Collins then caught a rebooked flight for an earlier-than-planned return to D.C.

At the closing of his morning keynote address, Collins had shared a quote from poet Paul Levi: “Hope in every sphere of life is a privilege that attaches to action. No action, no hope.”

The NIH acts to support top investigators and their best science to find biomedical answers for millions of people waiting for their hopes to be realized. In that vein, Collins said, “I like to think of the NIH as the National Institutes of Hope.”

Selwyn Vickers, M.D., senior vice president and dean of the UAB School of Medicine, hosted Collins during his visit to campus.

“I could not agree more with Dr. Collins, especially at a time such as now, when the world needs hope,” Vickers said. “I believe that UAB is also a place of hope — from diseases like cancer to neurofibromatosis, from benchtop science to bedside therapy, from rehabilitation to births, from trauma care to organ transplants.”

In normal times, and in a time of a pandemic.