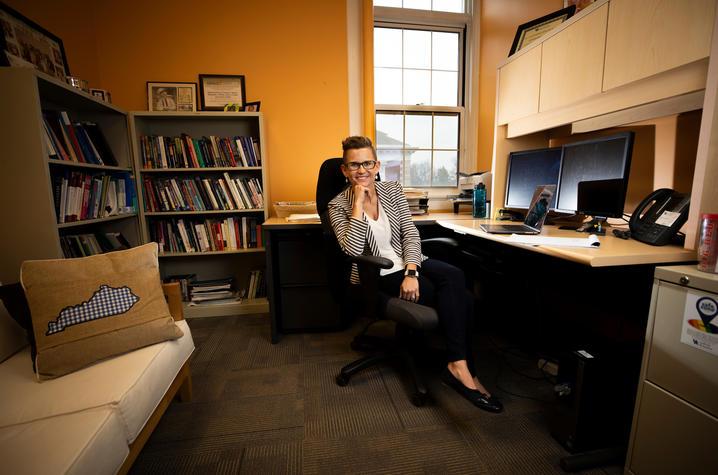 Christia Spears Brown's professional roles as a researcher, teacher and advocate for public policy issues are integrated around her interests in issues of diversity and equality.

Newswise — LEXINGTON, Ky. (Sept. 12, 2019) — When it comes to talking politics with your children, you may think they would rather be playing video games or texting their friends — but that's not exactly true.

With the 2020 U.S. presidential election fast approaching, should the youngest members of society be engaged in the political discussion? If so, how can parents and schools help navigate that conversation.

Christia Spears Brown, professor and associate chair in the Department of Psychology in the College of Arts and Sciences, was part of a team that sought to learn more about the political development of children. Given that Hillary Clinton’s 2016 candidacy was the first female major party nomination, they also examined children’s knowledge of gender and politics.

“We were pleasantly surprised by how engaged children were with the election and how much they knew about the candidates and about their specific policies. Children mentioned policies related to immigration most often, but also included references to gun control, taxes, jobs, international relations, women’s rights and crime," Brown explained. "At the same time, children seemed to be overhearing political conversations from radio, TV, peers and relatives that they don't fully understand."

Researchers interviewed 187 elementary school children — before and after the 2016 U.S. presidential election — to gain insight about their political knowledge, opinions and experiences. The sample was drawn from four different states across the U.S. (Kansas, Kentucky, Texas and Washington) that varied in their voting patterns and was racially diverse (including predominantly African American, Latinx and white children).

Overall, the study found that children demonstrated interest in and knowledge about the election and candidates but had gaps in their information. For example, although it was a smaller percentage than has been found in past studies, only 65% of children knew that the United States had never had a female president. Only one in three children knew a woman had ever been president of any country and no children could actually name a female world leader. When asked why women had never been the president, one out of four children thought women lacked leadership ability or were unqualified.

Brown argues that children need more input and guidance from adults as they learn about politics and government. “Elections are great opportunities to talk to kids about your values and the importance of civic engagement.”

More results from the study show:

• Children follow presidential elections: Over 90% of children sampled could provide information about at least one of the candidates (such as a policy proposal or personal characteristic). Nearly all children (99%) expressed a preference for one candidate to win the election and knew the election outcome.

• Many children expressed negative views of the candidates: Most children sampled (80%) made at least one reference to a candidate’s personal characteristics — such as being smart, nice, mean or rude. Children were equally likely to mention positive and negative characteristics overall (40% vs. 44% respectively), but more children mentioned positive characteristics for 2016 presidential candidate Hilary Clinton than for current U.S. President Donald Trump. That the majority of children in the sample were drawn from areas in which most voters supported Clinton may explain these findings.

• Environments influence children's political development: Both family and community environments appeared to influence children’s attitudes. For example, children who participated in the study were more likely to support Trump when they reported that their parents supported Trump. Children’s support for candidates also reflected the voting patterns in the children’s counties of residence. For example, children residing in counties with high levels of support for Trump were more knowledgeable about Clinton than children in counties with moderate levels of support for Trump.

• Children are largely ignorant of gender issues in politics: Children generally lacked knowledge about women’s underrepresentation in government (for example, nearly half of the children sampled reported that 50% or more of all U.S. governors and members of Congress are women whereas the accurate percentages at that time were around 20%).

“We encourage parents to talk to their children about their political beliefs and values. We encourage teachers to talk about the political process, the structure of our government and the importance of voting in a democracy," Brown said. "We were disheartened to hear so many children in our sample report quite negative things about the candidates, because we worry that it might lead them to become cynical and disinterested in politics. We should encourage children’s interest in the political process to hopefully create lifelong political participation.”

The study appears in the Monographs of the Society for Research in Child Development. Accompanying commentaries, videos and teaching materials are available on the Monograph Matters website.

Monographs of the Society for Research in Child Development