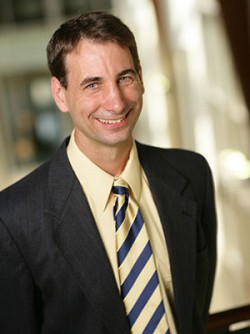 Newswise — The Supreme Court of the United States on Tuesday (April 17) hears oral arguments in a case that will determine whether online retailers can be required by states to collect sales taxes on purchases by their residents, and a University of Notre Dame tax expert calls the case “one of the most important in this millennium.”

Jim Seida, associate professor of accountancy at Notre Dame’s Mendoza College of Business, says retailers without physical presence, also known as remote sellers, currently are not obligated to collect sales taxes. Consumers who purchase items from remote sellers that did not charge sales tax are supposed to pay use tax on such items, but compliance is extremely low.

“The Government Accountability Office estimates that state and local governments lost between $8.4 and $12.5 billion in sales tax revenue last year from remote retailers,” Seida says. “To alleviate this loss, the South Dakota rules at issue in this case now place sales tax collection and remittance requirements on those businesses with ‘economic nexus.’”

The South Dakota economic nexus statute states that a remote seller with in-state sales exceeding $100,000 or 200 or more transactions in the current or previous year is required to collect and remit sales taxes. Other states also have passed similar economic nexus provisions to alleviate the lost sales tax revenue and to level the playing field for in-state retailers.

The Wayfair case will have huge impact. Seida says regardless of the Supreme Court’s decision, the outcome will affect retailers, consumers and state tax collections.

“In-state retailers with limited out-of-state sales would likely be helped if the Supreme Court rules in favor of South Dakota,” he explains. “Such retailers benefit because the remote sellers will no longer have a pricing advantage because all sales into the state will be subject to the same sales tax rate.

“Despite the equitable treatment between in-state retailers and remote sellers if the Supreme Court endorses the economic nexus standard, small to mid-sized remote e-retailers are concerned about the costs associated with collecting and remitting sales taxes across the state and various local tax jurisdictions. There are some 10,000 different sales tax jurisdictions in the U.S. Many e-retailers argue that ensuring that the correct sales tax is collected and remitted to the various jurisdictions imposes high compliance costs and an undue burden on the business. The magnitude of these compliance costs is a key consideration in the case.”

Seida says the outcome will not directly affect large retailers such as Amazon and Walmart because they currently collect sales taxes in most states and in many local jurisdictions; however, it will affect small to mid-sized retailers.

“Amazon could be favorably affected by a decision in favor of South Dakota because it would increase the demand for its fee-based service to collect sales taxes,” he says. “A ruling by the Supreme Court that endorses economic nexus could lead to additional compliance complexity as jurisdictions modify their sales tax rules to more closely resemble the economic nexus rules approved by the court.”

Three Republican senators filed a brief that argued Congress, not the judicial branch, should address the sales tax issue since it relates to interstate commerce. They believe a decision supporting economic nexus will harm small business and low-income consumers.

“National legislation might be better able to balance state tax revenue needs and compliance burdens associated with sales tax collection and remittance,” Seida says. “Regardless of the case outcome, federal legislation could be forthcoming in this area.”