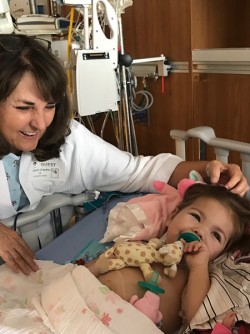 62-year-old Carol Graydon visits her granddaughter, 2-year-old Wryn Graydon, for the first time at Children’s of Alabama after she donated a kidney at the University of Alabama at Birmingham to save Wryn’s life. 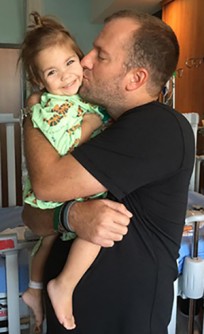 Carol Graydon's son, Michael, holds his 2-year-old daughter Wryn just before her transplant. Michael said of his mom, "“She won the lottery. Everybody wanted to (donate a kidney), but she was the one able to do it. She would come to tears every time she thought about being able to do this for Wryn.” 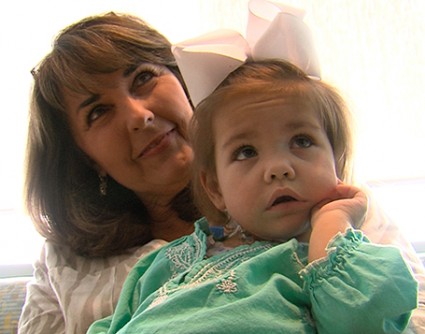 “I think any mother or grandmother would do whatever they could to help their little ones have an easier life,” said Carol Graydon on her desire to donate a kidney to her granddaughter, Wryn. 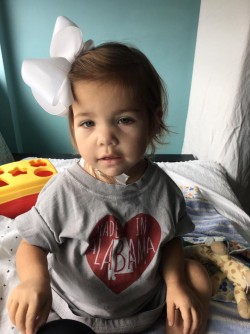 UAB Transplant Surgeon Carlton Young says Wryn Graydon's long-term prognosis is very good, especially after one year. "“The half life of many of these kidneys is 10 to 15 years, and many of these kids end up getting another transplant once they get into their 20s and 30s," Young said.

Previous Next
Newswise — BIRMINGHAM, Ala. — Life has not been easy for 2-year-old Wryn Graydon of Moody, Alabama. She was born July 6, 2015, a seemingly healthy 7-pound, 10-ounce girl whom mom, Haley Graydon, had carried full term with no health issues for either her or her baby. The only abnormality — which may have been a clue of the difficulties to come — was that Haley had an abnormally large placenta and measured far ahead of schedule halfway through her pregnancy.

A newborn screening suggested Wryn had congenital hypothyroidism, an inadequate thyroid hormone production in newborns. But a few weeks later, Wryn began doing worse despite treatment. She developed widespread swelling of the skin and sepsis, which led to an intensive care admission at just over 2 months of age. Wryn was dehydrated, and it was difficult to draw the blood needed to help accurately diagnose what was wrong.

Daniel Feig, M.D., division director of Pediatric Nephrology at the University of Alabama at Birmingham and medical director of Renal Transplantation at Children’s of Alabama, and his nephrology team were able to definitively diagnose a 10-week-old Wryn with congenital nephrotic syndrome of the Finnish type, a rare and severe disease seen in one in 50,000 children worldwide. CNSF can’t be diagnosed in the womb, but an abnormally large placenta is a common trait with the disease. The disease is diagnosed in infancy and typically leads to irreversible kidney failure.

As the diagnosis became clear, the long, highly specialized treatment road ahead for Wryn and her family began to take shape.

Doctors told the Graydons that Wryn had protein in her urine, low blood-protein levels, high cholesterol levels and swelling. Her kidneys, which were supposed to act as a barrier to prevent certain proteins from leaking, had a defect, and the proteins the kidneys were supposed to contain were slipping through, causing the body and her blood to lose these needed proteins and other needed elements to function properly.

Add it all up, and Wryn was progressing rapidly to end-stage kidney disease. Doctors said Wryn’s kidneys were going to have to be removed, and she was going to have to begin dialysis in an effort to bridge her to the only treatment available for her condition — a kidney transplant, something 33 percent of patients with Wryn’s condition don’t live long enough to see.

“Even though it was one of the worst answers we could hear, it was a relief to know what it was,” Haley Graydon said. “The doctors told us it was a long process and that, at that time, we weren’t even going to talk about the transplant because some babies don’t even make it to transplant. We just worried at first about getting the kidneys removed and starting dialysis.”

“I knew I was going to do it”
Wryn’s kidneys were removed when she was 4 months old, and she began her dialysis treatments. Doctors and her parents then waited for her to acclimate, recover and grow. Wryn could not be listed for transplant until she was at least a year old and weighed 22 pounds.

Meanwhile, as Haley and Michael Graydon agonized over the health of their daughter and making the right care decisions for her, Springville, Alabama, resident Carol Graydon — Wryn’s grandmother and Michael’s mother — knew what her role was going to be in providing her grandbaby a healthy life.

On July 13, 2017, 62-year-old Carol — or GiGi as she is affectionately called — went to the UAB Hospital operating room and had a kidney removed to save her granddaughter’s life.

“When it came down that I was a perfect match and that the transplant was going to be a go, I just was thanking the Lord that we had a match, cause we’ve known people who have waited for years,” Carol said. “I was surprised that they took a 62-year-old’s kidney; but when I went through all of the tests, the doctors kept saying my kidneys were like the kidneys of a 20-year-old.”

Carlton Young, M.D., professor in UAB’s Department of Surgery and director of Pediatric Renal Transplantation at UAB and Children’s of Alabama — the only programs in the Southeast to offer kidney paired donation to those younger than 18 — says people often think that children would receive another child’s kidney through deceased donation. Young, who is also director of Kidney and Pancreas Transplantation in UAB’s School of Medicine, says using a pediatric kidney brings with it an increased risk of clotting the blood vessels.

Adult kidneys are better because they provide enough renal mass to alleviate the child’s problem and improve their recovery prospects.

“Adequate blood flow is key,” said Young, who performed Wryn’s transplant. “When kids are that small, we have to go through the belly and connect the kidney to the aorta, the main artery that carries blood throughout the human body, and the inferior vena cava, which carries blood back to the heart. Those are the biggest blood vessels in the body in children Wryn’s age. This is the area in the abdominal cavity that also provides us enough space in order to place the kidney carefully and also have enough size from their native blood vessels so we can sew the vessels from the donor kidney.”

“She won the lottery”
Research has shown that the best results in transplants of this type come with kidneys from living donors.

Neither Haley nor Michael was able to donate to Wryn, a fact that was frustrating to both of them. Carol wanted badly to do it and cried to Michael early on — both in fear for her granddaughter’s life and that she was too old to donate.

But Carol came to the UAB Transplant Clinic anyway to follow up on her inward belief that she could donate. She brought three other people with her to be tested, too.

A few days later, Carol’s phone rang. She was a perfect match for her granddaughter.

“She won the lottery,” said her son, Michael. “Everybody wanted to do it, but she was the one able to do it. She would come to tears every time she thought about being able to do this for Wryn.”

“If I could be a part of it, of helping Wryn, just the mother in me … I would do anything for them,” Carol said. “I think any mother or grandmother would do whatever they could to help their little ones have an easier life. I’m just praying everything gets better every day.”

For Haley, trying to find the right words to capture her feelings for her mother-in-law’s sacrifice is difficult.

“I don’t think you can put into words how thankful you are,” Haley said. “There’s no gift you can give to say you’re thankful enough. That she was willing and … the sacrifice she made was amazing. We are just truly grateful.”

Carol says she hopes when people see their family’s story it will encourage someone to become a living donor to others in need.

“To change somebody’s life and to give them quality of life is a wonderful gift,” Carol said.

“Life-changing for all of us”
Young says Wryn’s long-term outlook is excellent. Children are often more susceptible to rejection because their immune systems are much more active than in someone who is older, and the first year after transplant is critical. If she can do well, Young says it is quite possible Wryn will not need another transplant until she is in her 20s.

“The half life of many of these kidneys is 10 to 15 years, and many of these kids end up getting another transplant once they get into their 20s and 30s,” Young said. “Oftentimes, you can get longer than 10 to 15 years with excellent matches, and if we can get a good 20 years out of the kidney, that’s great. There’s also a possibility in the future that medications will be much better such that she might be able to keep this for a longer period of time.”

Wryn got to go home Tuesday, July 25 — 12 days after her transplant. Haley says Wryn was excited to go home and play with her big sister, Blair, and be free from the constraints of dialysis.

“The things we will get to experience that have seemed so distant for the past two years will be life-changing for all of us,” Haley said. “We are looking forward to the fun times ahead, and swimming with Sissy, going on vacations and breaking curfew. This a marathon, so we take life one day at a time.”

If you are interested in living kidney donation, fill out the Living Kidney Screening Form today. To become an organ donor upon death, sign up with the Alabama Organ Center or the National Organ Donor Registry.