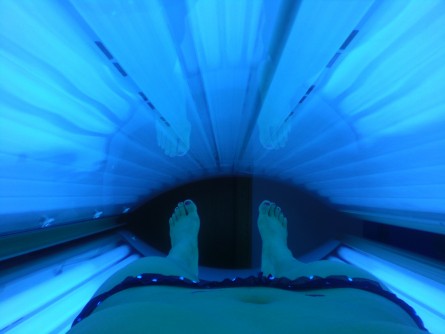 Newswise — A July, 2014 Call to Action to Prevent Skin Cancer by acting Surgeon General Dr. Boris Lushniak points out that indoor tanning is "strongly associated with increased skin cancer risk," but stops short of reporting that tanning causes cancer. A University of Colorado Cancer Center opinion published today in the American Journal of Preventive Medicine points out that UV tanning meets the same criteria as smoking as a cause of cancer and argues that announcing the causality could save lives.

"In 1964 when the Surgeon General finally reported that smoking causes lung cancer, awareness and policy followed. Smoking rates declined and lung cancer rates have too. It's time for the Surgeon General to say the same thing about UV tanning," says Robert P. Dellavalle, MD, PhD, MSPH, investigator at the CU Cancer Center, associate professor of dermatology at the University of Colorado School of Medicine, and the study’s senior author.

There are nine criteria used to determine a causal relationship in disease, developed in the context of smoking and lung cancer in 1965 by British epidemiologist Sir Austin Bradford Hill. Smoking and UV tanning both meet eight of the nine criteria, as follows:

1. Strength of AssociationHow much more likely is skin cancer in people who have used tanning beds? Numbers vary, but Dellavalle and colleagues point to analyses of large populations of people showing that skin cancer risk is about 16 percent more likely in people who report ever having used a tanning bed. The strength of the association between smoking and lung cancer is even stronger, with smokers being 35 percent more likely than non-smokers to get lung cancer, but in terms of epidemiology, the 16 percent increased risk of skin cancer in ever-users of UV tanning remains strong.

2. Consistency of AssociationDellavalle and colleagues point out that the link between UV tanning and skin cancer isn't limited to a specific population or nationality. The association is consistent in all studies.

4. TemporalityThis may seem obvious, but in order for cause and effect to be true, the cause must happen before the effect. With UV tanning and skin cancer, we see that ever-use of tanning beds precedes increased risk for skin cancer.

6. PlausibilityIs there a plausible way that UV tanning could cause skin cancer? Sure. UV rays from tanning beds penetrate the skins epidermal layer and may induce DNA alternations that promote the formation of cancer.

7. CoherenceThe data of lab experiments and population studies is coherent, meaning that data from both sources point toward a similar conclusion.

8. ExperimentScientists have used UV radiation to cause skin cancer in animal models. But, just as it is unethical to encourage people to smoke in order to see if smoking causes lung cancer, it is unethical to encourage people to tan in order to see if tanning causes skin cancer. Dellavalle points out that lack of ability to test the effect of UV tanning on cancer in a randomized control trial is "a primary advantage for the tanning industry, which claims that there is lack of true science behind cancer-causing claims."

9. AnalogyPeople with skin types that burn easily have higher rates of skin cancer. It's analogous to tanning as a whole: the more burned you get, the higher your risk.Dellavalle points out that most cancers are seen as the result of random, genetic mutations that unluckily allow cells to act cancerous. "But skin cancer and lung cancer are preventable types of cancer – reduce smoking and you reduce lung cancer; reduce UV exposure and you reduce skin cancer," he says.

"It's much easier to help people understand that indoor tanning causes cancer than it is to message something more convoluted about 'association'," Dellavalle says. "Tanning beds cause skin cancer. It is time to now more openly announce this causality."