A Close Call of 0.8 Light Years

Astronomers identify the closest known flyby of a star to our solar system: a dim star that passed through the Oort Cloud 70,000 years ago 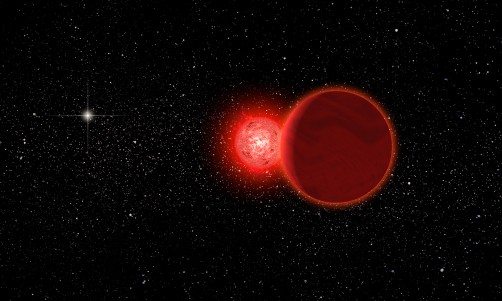 Artist's conception of Scholz's star and its brown dwarf companion (foreground) during its flyby of the solar system 70,000 years ago. The Sun (left, background) would have appeared as a brilliant star.

Newswise — A group of astronomers from the US, Europe, Chile and South Africa have determined that 70,000 years ago a recently discovered dim star is likely to have passed through the solar system’s distant cloud of comets, the Oort Cloud. No other star is known to have ever approached our solar system this close – five times closer than the current closest star, Proxima Centauri.

In a paper published in The Astrophysical Journal Letters, lead author Eric Mamajek from the University of Rochester and his collaborators analyzed the velocity and trajectory of a low-mass star system nicknamed “Scholz’s star.”

The star’s trajectory suggests that 70,000 years ago it passed roughly 52,000 astronomical units away (or about 0.8 light years, which equals 8 trillion kilometers, or 5 trillion miles). This is astronomically close; our closest neighbor star Proxima Centauri is 4.2 light years distant. In fact, the astronomers explain in the paper that they are 98% certain that it went through what is known as the “outer Oort Cloud” – a region at the edge of the solar system filled with trillions of comets a mile or more across that are thought to give rise to long-period comets orbiting the Sun after their orbits are perturbed.

The star originally caught Mamajek’s attention during a discussion with co-author Valentin D. Ivanov, from the European Southern Observatory. Scholz’s star had an unusual mix of characteristics: despite being fairly close (“only” 20 light years away), it showed very slow tangential motion, that is, motion across the sky. The radial velocity measurements taken by Ivanov and collaborators, however, showed the star moving almost directly away from the solar system at considerable speed.

“Most stars this nearby show much larger tangential motion,” says Mamajek, associate professor of physics and astronomy at the University of Rochester. “The small tangential motion and proximity initially indicated that the star was most likely either moving towards a future close encounter with the solar system, or it had ‘recently’ come close to the solar system and was moving away. Sure enough, the radial velocity measurements were consistent with it running away from the Sun’s vicinity – and we realized it must have had a close flyby in the past.”

To work out its trajectory the astronomers needed both pieces of data, the tangential velocity and the radial velocity. Ivanov and collaborators had characterized the recently discovered star through measuring its spectrum and radial velocity via Doppler shift. These measurements were carried out using spectrographs on large telescopes in both South Africa and Chile: the Southern African Large Telescope (SALT) and the Magellan telescope at Las Campanas Observatory, respectively.

Once the researchers pieced together all the information they figured out that Scholz’s star was moving away from our solar system and traced it back in time to its position 70,000 years ago, when their models indicated it came closest to our Sun. Until now, the top candidate for the closest flyby of a star to the solar system was the so-called “rogue star” HIP 85605, which was predicted to come close to our solar system in 240,000 to 470,000 years from now. However, Mamajek and his collaborators have also demonstrated that the original distance to HIP 85605 was likely underestimated by a factor of ten. At its more likely distance – about 200 light years – HIP 85605’s newly calculated trajectory would not bring it within the Oort Cloud.

Mamajek worked with former University of Rochester undergraduate Scott Barenfeld (now a graduate student at Caltech) to simulate 10,000 orbits for the star, taking into account the star’s position, distance, and velocity, the Milky Way galaxy’s gravitational field, and the statistical uncertainties in all of these measurements. Of those 10,000 simulations, 98% of the simulations showed the star passing through the outer Oort cloud, but fortunately only one of the simulations brought the star within the inner Oort cloud, which could trigger so-called “comet showers.”

While the close flyby of Scholz’s star likely had little impact on the Oort Cloud, Mamajek points out that “other dynamically important Oort Cloud perturbers may be lurking among nearby stars.” The recently launched European Space Agency Gaia satellite is expected to map out the distances and measure the velocities of a billion stars. With the Gaia data, astronomers will be able to tell which other stars may have had a close encounter with us in the past or will in the distant future.

Currently, Scholz’s star is a small, dim red dwarf in the constellation of Monoceros, about 20 light years away. However, at the closest point in its flyby of the solar system, Scholz’s star would have been a 10th magnitude star – about 50 times fainter than can normally be seen with the naked eye at night. It is magnetically active, however, which can cause stars to “flare” and briefly become thousands of times brighter. So it is possible that Scholz’s star may have been visible to the naked eye by our ancestors 70,000 years ago for minutes or hours at a time during rare flaring events.

The formal designation of the star is “WISE J072003.20-084651.2,” however it has been nicknamed “Scholz’s star” to honor its discoverer - astronomer Ralf-Dieter Scholz of the Leibniz-Institut für Astrophysik Potsdam (AIP) in Germany – who first reported the discovery of the dim nearby star in late 2013. The “WISE” part of the designation refers to NASA’s Wide-field Infrared Survey Explorer (WISE) mission, which mapped the entire sky in infrared light in 2010 and 2011, and the “J-number” part of the designation refers to the star’s celestial coordinates.