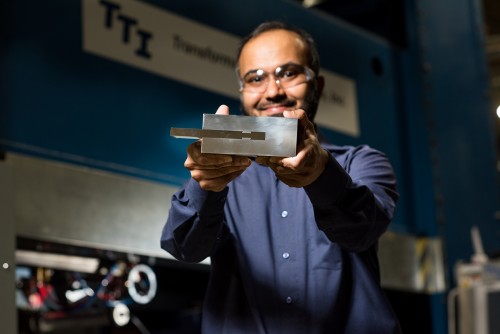 Friction Stir Dovetailing is a process that joins thick plates of aluminum to steel. The new process will be used to make lighter-weight military vehicles that are more agile and fuel efficient.

In woodworking, dovetails and glue are used to securely join pieces of wood together. Friction Stir Dovetailing is a similar approach for metals. Using a specially designed tool, aluminum is deformed into a steel dovetail groove to form a mechanical interlock. At the same time, the tool rubs along the bottom of the dovetail to form a thin metallurgical bond—or intermetallic compound—which “glues” the metals together within the dovetail.

The April 15 issue of Scripta Materialia describes the process in detail and the testing of joints created using the new technique. The peer-reviewed journal covers original research on the relationship between the structure and properties of materials.

According to the U.S. Government Accountability Office, the military spends several billion dollars each year on fuel consumption, which could be reduced by lessening the weight of ships, aircraft, ground vehicles, and cargo.

To lower fuel costs and increase operational effectiveness while still maintaining the safety of military personnel, the U.S. Army Tank Automotive Research Development and Engineering Center— or TARDEC —launched a campaignin 2014 seeking ways to make combat systems — such as tanks, fighting vehicles, and personnel carriers — more lightweight. One approach they are investigating is the replacement of heavy steel components with thicker, yet lighter, aluminum. But aluminum and steel cannot be welded together due to vastly different melting points, so they sought a new process to join these materials.

While Friction Stir Scribe solved the challenge of joining thin sheets of aluminum with steel, that technique was found to not scale up to the thick plates of aluminum — measured in inches — needed for robust military vehicles.

A technique that dovetails nicely with aluminum and steel

In woodworking, dovetails and glue are used to securely join pieces of wood together. Friction Stir Dovetailingis a similar approach for metals. Using a specially designed tool, aluminum is deformed into a steel dovetail groove to form a mechanical interlock. At the same time, the tool rubs along the bottom of the dovetail to form a thin metallurgical bond — or intermetallic compound — which "glues" the metals together within the dovetail.

"The combination of mechanical interlocking and metallurgical bonding formed during a single process is the innovation that produces joints of superior strength and ductility compared to joints created by the other friction stir methods," said PNNL engineer Scott Whalen, who leads the research.

The research team discovered that using complex machine controls to precisely regulate temperature and pressure at the aluminum-steel interface inhibited growth of intermetallic compounds. These compounds grow thick and non-uniformly during the other friction stir techniques, causing joint brittleness and failure. However, growth of intermetallic compounds — iron aluminide or Fe3Al — during the Friction Stir Dovetailing technique is beneficial to the joint because they are so thin, one thousand times thinner than a human hair, which acts as "glue" without causing embrittlement.

Lab testing of joints made by Friction Stir Dovetailing showed that when combining metallurgical bonding with the dovetail configuration, the joint strength is not only superior, but the material can stretch to over a half centimeter before the joint breaks — illustrating five times more ductility than aluminum and steel joined with other friction stir techniques. This allows the joint to "give" or move farther before breakage — an attractive feature for military combat vehicles.

"We are constantly looking for innovative multi-material joining methods to help us select the right material for the right purpose in the right location, and Friction Stir Dovetailing offers us precisely such a state-of-the-art method," said Jason Middleton, TARDEC associate director for Product Lifecycle Engineering.

The research team now plans to refine the technique and expand the process for other joint configurations. In addition to aluminum and steel, other material combinations such as aluminum to copper, aluminum to magnesium, and magnesium to steel can also be joined using Friction Stir Dovetailing.

And while Friction Stir Dovetailing will help solve the fuel consumption challenge for TARDEC, it is also available for licensing for other potential applications as well as collaborative research opportunities via PNNL commercialization manager Sara Hunt.

Pacific Northwest National Laboratory is the nation’s premier laboratory for scientific discovery in chemistry, earth sciences, and data analytics and for solutions to the nation’s toughest challenges in energy resiliency and national security. Founded in 1965, PNNL is operated by Battelle for the U.S. Department of Energy's Office of Science. DOE's Office of Science is the single largest supporter of basic research in the physical sciences in the United States, and is working to address some of the most pressing challenges of our time. For more information, visit PNNL’s News Center. Follow us on Facebook, Google+, Instagram, LinkedInand Twitter.