A lose-lose game: animals are under threat as the climate gets warmer and more variable 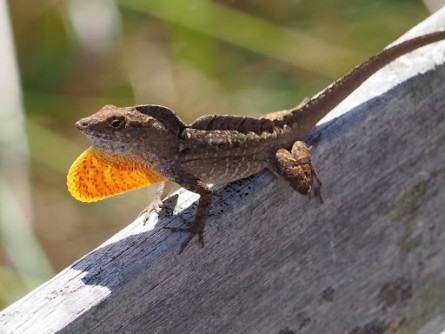 The brown anole (Anolis sagrei) is one of the species studied by the Logan Lab and could provide valuable data to ground-truth the predictions made by Guille’s simulations.

Newswise — How has climate change affected your life? Maybe torrential rains have flooded part of your town, or your city has had to contend with longer heat waves every year. Maybe you kept your attention on the news for days at a time to find out if a wildfire would change its direction and come toward you, or if a hurricane would be strong enough that you should evacuate. Climate change will continue to affect the world around us in complex and tragic ways. Increasing temperatures are causing rising ocean levels, shifting weather patterns, and threatening the survival of animals and plants. But along with increasing temperatures, the climate is also becoming more variable, and more extreme.

We have long anticipated many of these changes, but it can still be difficult to predict how they will affect the animals that live in these shifting environments. When the entire climate is at stake, figuring out what will happen to at-risk species is a big task. Luckily, Guillermo (Guille) Garcia Costoya is a person interested in asking big questions. A PhD student in Dr. Mike Logan’s lab at the University of Nevada, Reno, Guille studies whether animals will be able to adapt to the kinds of temperature extremes that are becoming more common. In this age of rapidly changing climate, which species will survive, and which will not?

Specifically, Guille is interested in an animal population’s thermal tolerance. All animals have temperature ranges in which they operate best. This is especially true of ectotherms like reptiles and many invertebrates who use the surrounding environmental temperature to regulate their internal body temperatures. Think of a turtle basking on a log - it is using the sun to warm its body to an optimum temperature level so that it can do all the tasks involved in finding food, avoiding predators, and reproducing. Each species may have a slightly different “thermal optimum” at which they prefer to live their lives, and they might have many adaptations that allow them to maintain that optimal body temperature. If the outside temperature is a bit too hot or too cold, animals will have ways of dealing with that, but if it is significantly outside the range for which they are adapted, they won’t be able to make up the difference, and could die, or fail to reproduce. In a more extreme climate, animals will be forced to live outside their optimal temperature more often, and Guille wants to know what that will mean for their long-term survival.

Generally, an animal species will have one of two patterns of thermal tolerance. Either it will be a “heat-specialist”, able to function well at high temperatures, but not at all well suited to low or even average ones, or a “cold-generalist”, having a broad range of temperatures at which it can operate, but not very well adapted to any particular one. Because of the way traits are passed down from generation to generation, it is unlikely that an animal will be both well suited to high temperatures and competent across a wide range of temperatures. This means that there are two different ways that climate change could affect these species. The average temperature could increase, so that any species that is a heat-specialist might be able to survive the new conditions. Or the temperature could become more variable and extreme, which would mean that it might be more advantageous to be a cold-generalist, able to handle lots of different conditions. Unfortunately, both of these climatic changes are happening at once, and happening much more quickly than the time it would normally take animals to adapt to new conditions. So what will this mean for animal populations?

Scientists are able to predict how an animal species will respond to changes in their environment through painstaking field observations and lab-based experiments, but those strategies are time- and labor-intensive, and only get at answers for one animal species at a time. Guille wanted to think bigger than that. He decided to use simulations to predict how species would fare in light of the rapidly changing climate. The simulations do not focus on any one organism, but instead depict what might happen to animal species generally under different climate scenarios, from mild changes to drastic shifts in temperature averages and variability. He also tested the likelihood of the heat-specialist and cold-generalist lifestyles being mutually exclusive, and tested each combination of conditions on theoretical animal species with different population sizes.

The results are not heartening. Even under the best case scenario, when a population is large to begin with, it can readily adapt to different temperature conditions, and the climate changes are relatively subtle, Guille’s simulations still show an approximately 20% chance that it will go extinct by 2100. If a population has none of those advantages, and the climate changes are more extreme? Guaranteed extinction in just over 60 years. “These predictions need to be taken with a grain of salt,” he emphasizes - a species could go extinct much earlier if other stressors are at work, like habitat loss, or much later if it is able to adapt in other ways, such as changing its behavior. Still, it’s not an optimistic picture of what is to come. “It’s kind of a lose-lose game,” Guille says. Because a species does not have an unlimited ability to adapt to changes, “and since there are multiple things to adapt to, you have a very high likelihood of extinction.”

While these are simulations, and they are not designed to speak to the future of specific animals at risk today, Guille hopes eventually to test his theoretical predictions against observations of actual species in the wild. Other members of the Logan Lab are studying how animals adapt to their changing environments using anole lizards in the Bahamas and Panama, so he’ll be able to ground-truth his predictions based on the patterns they see in these real populations of lizards.

Even in Guille’s preliminary results, the situation doesn’t look good. But none of this is set in stone. The climate is changing already, but the degree to which it changes, and the extremes of the temperature highs and variability that animals will have to contend with are being decided right now. They are being decided by our collective action - and inaction. And in advocating, organizing, and acting together, all of us get to choose whether these species will have a fighting chance, or whether we will let them dwindle into extinction.