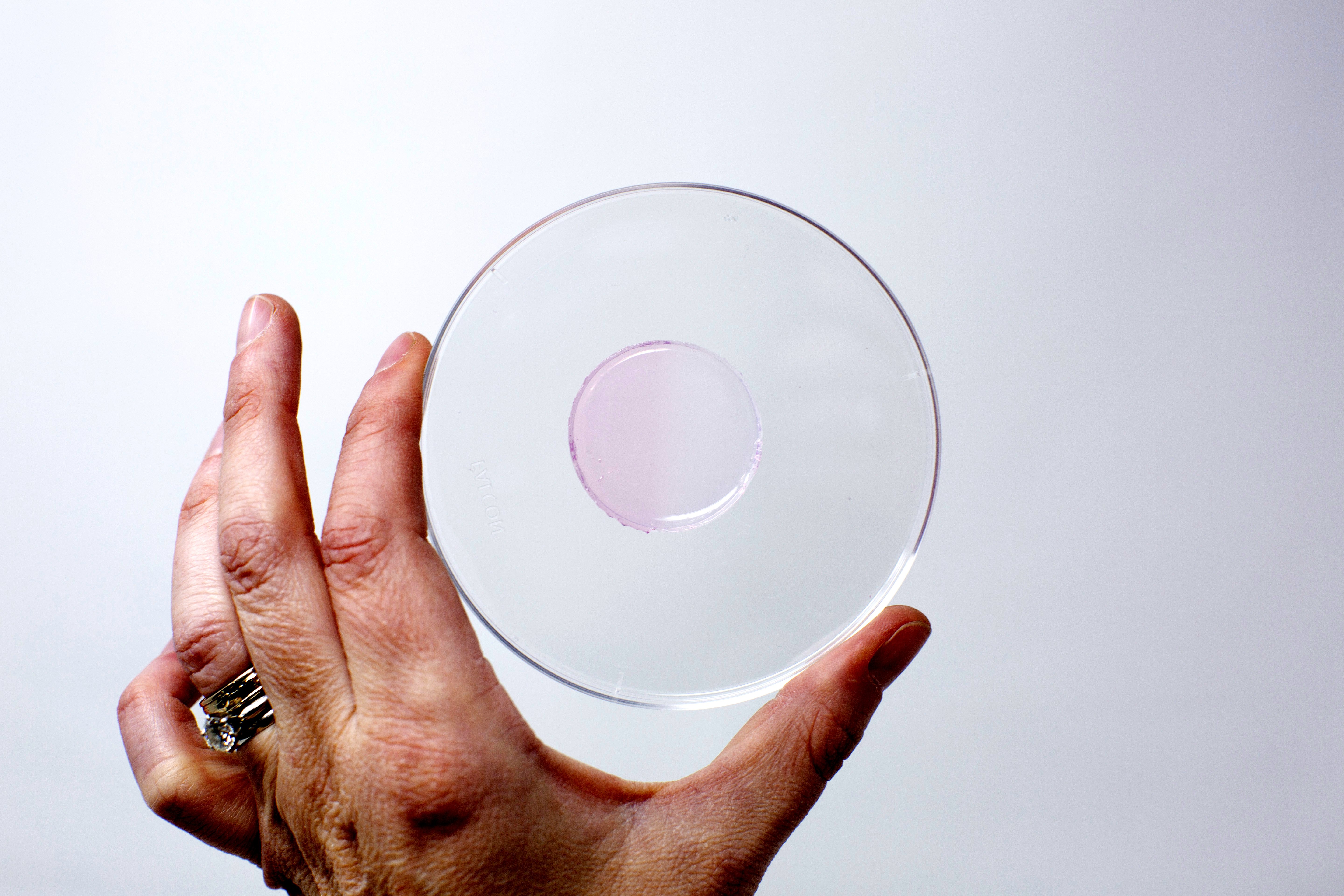 Arizona State University researchers (in collaboration with Banner MD Anderson Cancer Center) have discovered a biocompatible cost-effective hydrogel that can be used to monitor therapeutic doses of ionizing radiation by becoming more pink with increasing radiation exposure. This picture shows a circle of hydrogel that was irradiated on the left half, which is slightly pink; whereas the right half of the gel is not irradiated and remains colorless.

Newswise — SAN DIEGO, CA – More than half of all cancer patients undergo radiation therapy and the dose is critical. Too much and the surrounding tissue gets damaged, too little and the cancer cells survive. Subhadeep Dutta and Karthik Pushpavanam, graduate students working in the lab of Kaushal Rege, Professor at Arizona State University in Tempe, and collaborators at Banner-M.D. Anderson in Gilbert, Arizona, developed a new way to monitor radiation doses that is cost-effective and easy to read. Dutta will present their research on Tuesday, February 18 at the 64th Annual Meeting of the Biophysical Society in San Diego, California.

Radiation therapy directs high energy beams to destroy the genetic material inside cells and prevent them from growing. Typically, a radiation therapy team decides the total dose of radiation, and then divides that total dose over several sessions. The machines and calculations involved are usually spot-on as far as dosages, but sometimes variations, perhaps due to patient movement such as breathing, or in rare instances due to issues with the machine or software, can be causes for error. Monitoring the dose is critical as both overdosing and underdosing can compromise patient safety—too much healthy tissue or too little tumor can be destroyed in the process.

Dutta, Pushpavanam, Rege, and colleagues made a hydrogel that can be applied directly to a patient’s skin in order to easily measure radiation doses. Mixed into the hydrogel are gold salts and a few amino acids. Without radiation, the gel is colorless, but as it is exposed to radiation it becomes pink. The color intensity is directly correlated to the amount of radiation. At the end of a treatment, it is painlessly peeled off the skin and the color is measured with a common and relatively inexpensive lab instrument, an absorption spectrometer.

Some dose monitors are currently available for patients. “One looks like a sheet of paper (Radiochromic Films), but it is sensitive to light and heat, so it must be carefully handled, and requires long processing times. Another is a tiny sensor (NanoDot®), which is expensive and requires multiple arrays to cover an area of the skin. Ours can be used directly onto the skin and is relatively inexpensive,” Dutta says.

The gel has performed well in testing and was recently used on canine cancer patients undergoing radiotherapy. “Our next plan is to convert it to an app-based system, where you can take a picture of a gel and that can predict the dose based on programming in the app. It’s just measuring color, which is easy to do,” says Dutta. The team is hopeful that future studies will lead to translation of this technology for use with human patients in the clinic.