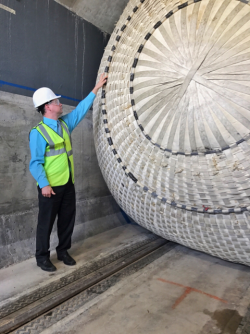 A view of the Resilient Tunnel Plug before it is pressurized.

The Resilient Tunnel Plug stores out of the way of passing trains, but can be rapidly deployed, inflating in stages to seal the tunnel from flooding. Time lapse 11 minutes.

Newswise — Protecting our infrastructure isn’t just about preventing malicious attacks, but also mitigating the damage of natural disasters. If you’ve seen a hurricane, tornado, or super storm, then you know just how much damage they can do to roads, bridges, construction sites, and especially underground subways. Think of the sheer number of ways water can enter into a subway tunnel, and it can become exhaustive. From the entrances, stairwells, elevator shafts, vents, rail yards, and the tracks themselves, the nature of being underground puts our subway systems at an inherent risk. Commuting is tough enough on a normal workday without the added hassle of a flooded tunnel on your way to or from work. With that in mind, how do subway systems around the world deal with this natural threat?

The Department of Homeland Security Science and Technology Directorate (S&T) has a solution in the form of a giant inflatable plug that will seal off subway tunnels and stop water from flowing throughout the subway system into stations and other subway lines.

Dubbed the Resilient Tunnel Plug (RTP), S&T, in conjunction with ILC Dover, the Department of Energy’s Pacific Northwest National Laboratory (PNNL), and West Virginia University, demonstrated the inflatable device at a recent event held in Frederica, Delaware. The uninflated plug integrates seamlessly into a subway tunnel without impeding the flow of normal train traffic, but can be quickly inflated to stop water from rushing through the tunnel and remain inflated to withstand the incredible pressure of restrained floodwaters.

Fortune’s team understood the importance of the project, but also knew it wouldn’t be an easy task. They were attempting to take something only seen in science fiction movies and make it reality.

“The project started with a simple proof of concept to demonstrate feasibility, said Greg Holter of PNNL. “We then moved into the development phase to design, build, and demonstrate a plug system that would reliably meet key requirements.”

The plug needs to be stored in limited space while strong enough to withstand not just the external water pressure, but the internal pressure of the air inside the plug. Holter says this is what led the project team to use a high-strength fabric construction similar to the technology used to land the Mars Rover on the harsh planet surface.

ILC Dover is home to a full-size replica subway tunnel where scientists and engineers to constantly push, poke, and prod the RTP, ensuring it’s ready for primetime.

“We tested several configurations of the plug during the program to eventually identify the design that worked best in the tunnel environment,” said David Cadogan, ILC Dover’s Director of Engineering and Product Development. “The most challenging aspects of the design, aside from having it withstand all of that pressure, was getting the plug to deploy and then seal the tunnel in a completely repeatable fashion. Then, finding the right design to allow it fit into a very small container mounted in the tunnel.”

Cadogan says they went through several system level tests, but they knew they were on the right path when the RTP passed its stress test by holding back water for a full 21 days.

“That was the final proof that we had met every requirement for the RTP system,” said Cadogan.

While doing everything in their power to meet those requirements for the tunnel plug, the scientists and engineers also discovered other uses for the technology and developed additional tools needed to keep transit systems and citizens dry and safe during a terrorist attack or storm.

“Spinoff technologies based on the plug, include covers for subway stairwells and fabric flood walls that can be deployed in an instant during an emergency. More than 20 stairwell covers have already been installed in lower Manhattan as part of the New York City subway system's Super Storm Sandy recovery efforts," said Fortune, “With the RTP, we are capable of controlling the vastness of danger, damage and even inconvenience to the public due to flooding events.”

After a long journey and a lot of hard work, S&T, PNNL, and ILC Dover managed to make fantasy a reality and developed a creative real-world solution that will help protect the nation's transportation systems during natural disasters.