A Tale of Two Species 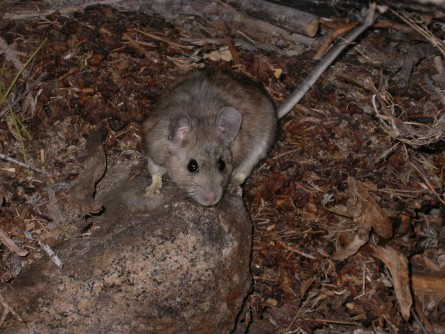 A woodrat emerging from its den at dusk. The small tags in each ear indicate that this individual had been previously captured and genetic material was sampled as part of a study to understand the dynamics of the hybrid zone in southern California.

Newswise — A pair of new studies from the Wildlife Conservation Society, Idaho State University, and the University of Nevada Reno look at the surprising variety of factors that prevent two closely related species of woodrats from becoming a single hybrid species despite the existence of hybrid individuals where the two species come into contact. After finding that two closely related species, the desert and Bryant’s woodrats, could interbreed and produce hybrid offspring, scientists set out to determine why only 14 percent of the population in a “contact zone” had genetic signatures from both species. (If the two species were similar enough to interbreed, what was keeping them from merging into a single hybrid species?) In the study, “Ecological segregation in a small mammal hybrid zone: Habitat-specific mating opportunities and selection against hybrids restrict gene flow on a fine spatial scale,” which appears in the March print edition of the journal Evolution, the authors discuss the factors driving these mating dynamics in a hybrid zone in southern California. Trapping and handling hundreds of woodrats (also known as packrats), the scientists found that the two species are highly associated with different habitat types, though they may live within meters of each other along the boundary. Their research showed that 98 percent of Bryant’s woodrats occupied a boulder-strewn hillside comprised of coastal / Sierra vegetation, while 93 percent of the desert woodrats occupied the adjacent valley floor consisting of Mojave desert scrub and a sandy substrate. This, in spite of the fact that both habitats were theoretically available to both species. “Mating opportunities between species are limited because the two species make their homes and forage in very distinct habitats, even though those habitats are right next to each other,” said lead author of both studies, Quinn Shurtliff of the Wildlife Conservation Society and Idaho State University. Another reason why interbreeding between species is limited: personality conflicts. The scientists brought wild-caught woodrats into the laboratory to test female mate preferences.

Another factor shown to be determining the number of hybrids is that hybrid offspring do not survive to adulthood as well as do the other two species. Higher proportions of Bryant’s woodrats survived to their first year of adulthood than did the hybrids (33 percent vs. 10 percent). The same was the case for the desert woodrats (22 percent vs.10 percent percent). Once the hybrids reached their first year of adulthood, however, they fared as well as the purebreds.

The reason for the low juvenile hybrid survivability, the authors say, may lie in the lack of aggressiveness and ability to compete with purebred males for denning sites and in winning territorial battles. This may necessitate greater dispersal for the male hybrids pushing them out of range of female hybrids and exposing them to greater predation pressure.

Shurtliff said, “These studies offer further insight into the behavioral and ecological dynamics of hybrid zones. Understanding these unique areas is important because there are many examples of naturally occurring hybrid zones, and new hybrid zones will form in the future as climate change and human impacts cause species distributions to shift and come into contact. For example, scientists have documented hybrid zones between introduced and native species, and climate change has already been linked to hybridization among flying squirrels in eastern North America. It is important to understand these relationships so that we can predict, and where necessary, mitigate their negative impacts.”

“Ecological segregation in a small mammal hybrid zone: Habitat-specific mating opportunities and selection against hybrids restrict gene flow on a fine spatial scale,” appears in the March print edition of the journal Evolution. Authors include: Quinn R. Shurtliff of the Wildlife Conservation Society; Peter J. Murphy and Marjorie D. Matocq of the University of Nevada, Reno.