A Third of Breast Cancer Patients Concerned About Genetic Risk 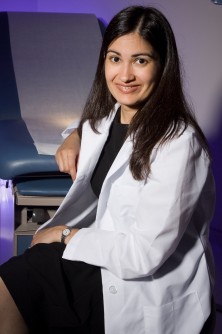 Newswise — ANN ARBOR, Mich. — A new study from the University of Michigan Comprehensive Cancer Center finds that many women diagnosed with breast cancer are concerned about the genetic risk of developing other cancers themselves or of a loved one developing cancer.

Overall, 35 percent of women with breast cancer expressed a strong desire for genetic testing, but 43 percent of those women did not have a relevant discussion with a health care professional. The study also found that racial minority patients with a strong desire for testing were less likely than white patients to discuss it with a professional, even though studies show that minority patients are not at lower risk for these mutations.

About 5 percent to 10 percent of breast cancer patients have an inherited genetic mutation that drives their cancer. Many of the women who reported interest in genetic testing were at low risk of having a mutation and doctors would not typically discuss genetic risk with them.

“With recent judicial opinions, direct-to-consumer marketing, and celebrity reports, the public has become much more aware that genetic testing is available. But genetic risk is complex. Even patients unlikely to have elevated genetic risk may still benefit from a discussion,” Jagsi says.

The researchers surveyed 1,536 women who had been treated for breast cancer. Patients were identified through the Surveillance, Epidemiology and End Results databases from Detroit and Los Angeles.

Patients who had a strong desire for testing reported being worried that other members of their family might get breast cancer in the future. Worry was highest among Latinas who spoke only Spanish, where 83 percent reported this concern.

In addition, these women were more likely to report worry about their own risks when evaluated in long-term follow-up as survivors. Nearly half of those who had an unmet need for discussion about genetic testing were worried about breast cancer. Only a quarter of those who did not have unmet need reported this worry.

“By addressing genetic risk with patients, we can better inform them of their true risk of cancer returning or of developing a new cancer. This could potentially alleviate worry and reduce confusion about cancer risk,” says Jagsi, who is also a member of the U-M Institute for Healthcare Policy and Innovation.

Results of the study appear in the Journal of Clinical Oncology.

Women who have a genetic mutation face a higher risk of developing a second breast cancer and may wish to consider more aggressive treatment, preventive measures or additional screening.

Reference: Journal of Clinical Oncology, “Concerns About Cancer Risk and Experiences With Genetic Testing in a Diverse Population of Patients With Breast Cancer,” published online April 6, 2015