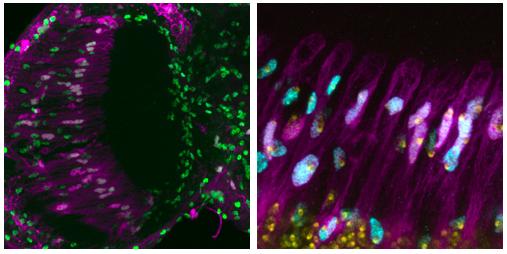 Newswise — Scientists have discovered a novel anti-aging defence in the brain cells of adult fruit flies: producing extra copies of the genome, according to a new study published today in eLife.

The findings could help explain how the brain, which rarely produces new cells, is able to cope with the accumulation of cell damage over time and prevent excess cell loss during aging. They may also help scientists answer questions about human age-related brain diseases.

Most cells have two copies of each chromosome, one from each parent. This provides each cell with two complete copies of DNA, referred to as the genome. But some cells accumulate extra copies of chromosomes, although how and why they do this is not entirely clear. Some scientists have suggested that excess chromosomes might lead to age-related brain diseases.

"The brain of the fruit fly Drosophila melanogaster is an ideal model for studying age-related changes in the brain because the fly has a relatively short lifespan, its brain cells rarely multiply, and we have excellent tools for manipulating fly genetics," says lead author Shyama Nandakumar, a doctoral student in the department of Molecular, Cellular, and Developmental Biology at the University of Michigan, Ann Arbor, US.

In the study, Nandakumar and colleagues examined adult fly brain cells and found that some accumulate extra copies of their genome, especially in parts of the brain responsible for vision - the region of the brain which shows more DNA damage with age.

Next, they subjected fly brain cells to oxidative stress or ultraviolet radiation, which damage DNA and can cause cell death. They found that this exposure increased the production of extra copies of chromosomes in the cells, and the cells were less likely to die as a result of the damage. "These data suggest that cells with extra copies of the genome are more resistant to cell death and may serve a beneficial or protective role in the aging brain," Nandakumar explains.

Previous studies have found that patients with early stages of Alzheimer's disease have extra chromosomes in their brain cells than people of the same age who do not have the condition. This has led scientists to question whether accumulating extra chromosomes leads to brain cell death and brain disease.

"Our study suggests that the production of extra copies of chromosomes might actually be a normal response to the accumulation of age-related damage in flies and may even help protect against cell death," concludes senior author Laura Buttitta, Associate Professor of Molecular, Cellular and Developmental Biology at the University of Michigan. "Further studies are now needed to determine if this is also true in humans."

eLife is a non-profit organisation created by funders and led by researchers. Our mission is to accelerate discovery by operating a platform for research communication that encourages and recognises the most responsible behaviours. We work across three major areas: publishing, technology and research culture. We aim to publish work of the highest standards and importance in all areas of biology and medicine, including Developmental Biology, while exploring creative new ways to improve how research is assessed and published. We also invest in open-source technology innovation to modernise the infrastructure for science publishing and improve online tools for sharing, using and interacting with new results. eLife receives financial support and strategic guidance from the Howard Hughes Medical Institute, the Knut and Alice Wallenberg Foundation, the Max Planck Society and Wellcome. Learn more at https://elifesciences.org/about.