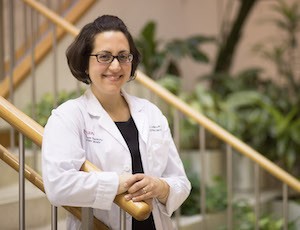 Newswise — New Brunswick, N.J., February 20, 2020 – Research from Rutgers Cancer Institute of New Jersey shows administering the immunotherapy drug pembrolizumab together with chemotherapy given at the same time as radiation treatment (chemoradiation) is safe and tolerable as a first-line therapy for patients with stage 3 non-small cell lung cancer (NSCLC). The work, stemming from a multi-center phase 1 clinical trial led by Rutgers Cancer Institute, is published in the February 20 online edition of JAMA Oncology (DOI: 10.1001/jamaoncol.2019.6731).

“Locally advanced NSCLC accounts for 20 to 25 percent of all new diagnoses of NSCLC, with five-year overall survival rates of between 25 to 30 percent when standard therapy is given. Current standard treatment in which an immunotherapy drug is administered after chemoradiaton offers a 57 percent progression-free survival rate compared to 43.5 percent when chemoradiation is given alone. Our team wanted to examine the safety and tolerability of the immunotherapy drug pembrolizumab when administered concurrently with chemoradiation, as we’ve learned from first-line treatment of stage 4 disease that we see better patient outcomes the earlier immunotherapy is given,” shares Rutgers Cancer Institute radiation oncologist Salma Jabbour, MD, who is the lead and corresponding author of the current work.

Typically, the human body’s immune system recognizes abnormal cells in the body and destroys them. Cancer cells frequently create proteins (PD-L1, programmed cell death ligand-1) on the cell surface that act as signals to turn off this part of the immune system. Pembrolizumab is a drug approved by the Food and Drug Administration to treat melanoma and other forms of cancer that targets PD-1 receptors, which act as a signaling ‘switch.’ Pembrolizumab blocks this action and turns the ‘switch’ back on, allowing the immune system to recognize cancer cells as foreign and attack them.

Results show the combined treatment is feasible and well tolerated with a 12-month progression-free survival of 69.7 percent. Clinical benefit accounted for 94.6 percent at a median of 12.6 months. Of 19 evaluable patients (those who received 2 or more cycles of pembrolizumab) for response, the best response to therapy was a partial response seen in 73.7 percent, followed by 15.8 percent with a complete response, and 5.3 percent with stable disease. Local progression occurred in one patient, and of the six who developed metastatic disease, the median time to metastatic disease was 14.7 months. While there was an increased rate of pneumonitis, the authors note that patients with this form of lung inflammation responded to high-dose steroid treatment.

“This study demonstrates that the combination of immunotherapy with chemoradiation has the potential to improve cure rates for patients with stage 3 non-small cell lung cancer,” notes Dr. Jabbour, who is also a professor of radiation oncology at Rutgers Robert Wood Johnson Medical School.

Given the risk of pneumonitis when pembrolizumab is given with chemoradiation, the authors note further evaluation of the treatment combination through clinical trials is warranted, where careful radiation design to limit key lung parameters and biomarkers can be implemented.  They add study limitations include the small sample size and limited follow-up duration.

This work was previously presented at the American Society for Clinical Oncology 2019 Annual Meeting in June 2019 and the Society of Immunotherapy for Cancer meeting in November 2018.

Additional details including information on funding and conflicts of interest can be found here.