Acetazolamide increased sensitivity to treatment and enhanced survival in mice 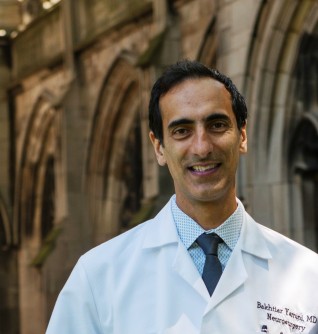 Bahktiar Yamini, MD, a professor of neurosurgery at the University of Chicago Medicine

Newswise — A drug used to treat altitude sickness — as well as glaucoma, epilepsy, heart failure and seizures — may also offer significant gains for patients with a fast-growing brain tumor known as glioblastoma, according to a study published July 4, 2018, in the journal Science Translational Medicine.

The drug, acetazolamide, sold under the trade name Diamox, is “cheap to make, easy to take and has limited side effects,” said study director Bahktiar Yamini, MD, a professor of neurosurgery at the University of Chicago Medicine.

“I take it myself, whenever I go to the Rocky Mountains,” he said, “two pills a day.” The most common side effect of Diamox is “a metallic taste when drinking something carbonated.”

The most frequently used chemotherapy for gliomas is a drug called temozolomide (TMZ). However, not all patients respond to this drug. Median survival with this disease is about 14 months.

TMZ acts by damaging DNA in ways that can kill tumor cells. But some tumor cells are able to block or repair this type of DNA damage. This limits the drug’s impact.

The researchers found that most glioma patients with high levels of a protein called BCL-3 (B cell CLL/lymphoma 3) were unresponsive to the beneficial effects of TMZ. BCL-3 shields cancer cells from TMZ damage by activating a protective enzyme known as carbonic anhydrase II.

Acetazolamide, however, is a carbonic anhydrase inhibitor. It can restore TMZ’s ability to kill tumor cells. Adding acetazolamide to TMZ enabled mice with gliomas to survive longer.

“We tested this combination treatment strategy in several animal models,” Yamini said. It cured some of them. Others had a 30 to 40 percent increase in survival time.

When Yamini and colleagues looked at BCL-3 level from previous human studies, they found that patients with lower levels of BCL-3 who were treated with TMZ survived longer than patients who had high levels of this biomarker.

“An important feature of predictors like BCL-3 is that they are informative,” the authors note. “They can identify pathways to improve treatment response.” By examining those pathways, the authors identified carbonic anhydrase inhibitors, such as acetazolamide, as a way to reduce resistance to temozolomide.

“Our data,” they note, demonstrate that it is the “induction of CAII by TMZ that is important in modulating response to therapy.”

Validating the use of BCL-3 to predict which patients will benefit from the use of temozolomide will require verification in a prospective randomized clinical trial, the authors note. They also suggest that repurposing acetazolamide along with temozolamide might be particularly effective in a subgroup of appropriate patients with tumors that have high BCL-3 expression. They have already organized a trial at several Chicago area institutions and hope to recruit patients soon.

The study, “BCL3 expression promotes resistance to alkylating chemotherapy in gliomas,” was funded by the National Institutes of Health and the Ludwig Center for Metastasis Research at the University of Chicago. Additional authors include Longtao Wu, Giovanna Bernal, Kirk Cahill, Peter Pytel, Carrie Fitzpatrick, Heather Mashek and Ralph Weichselbaum, all from the University of Chicago.