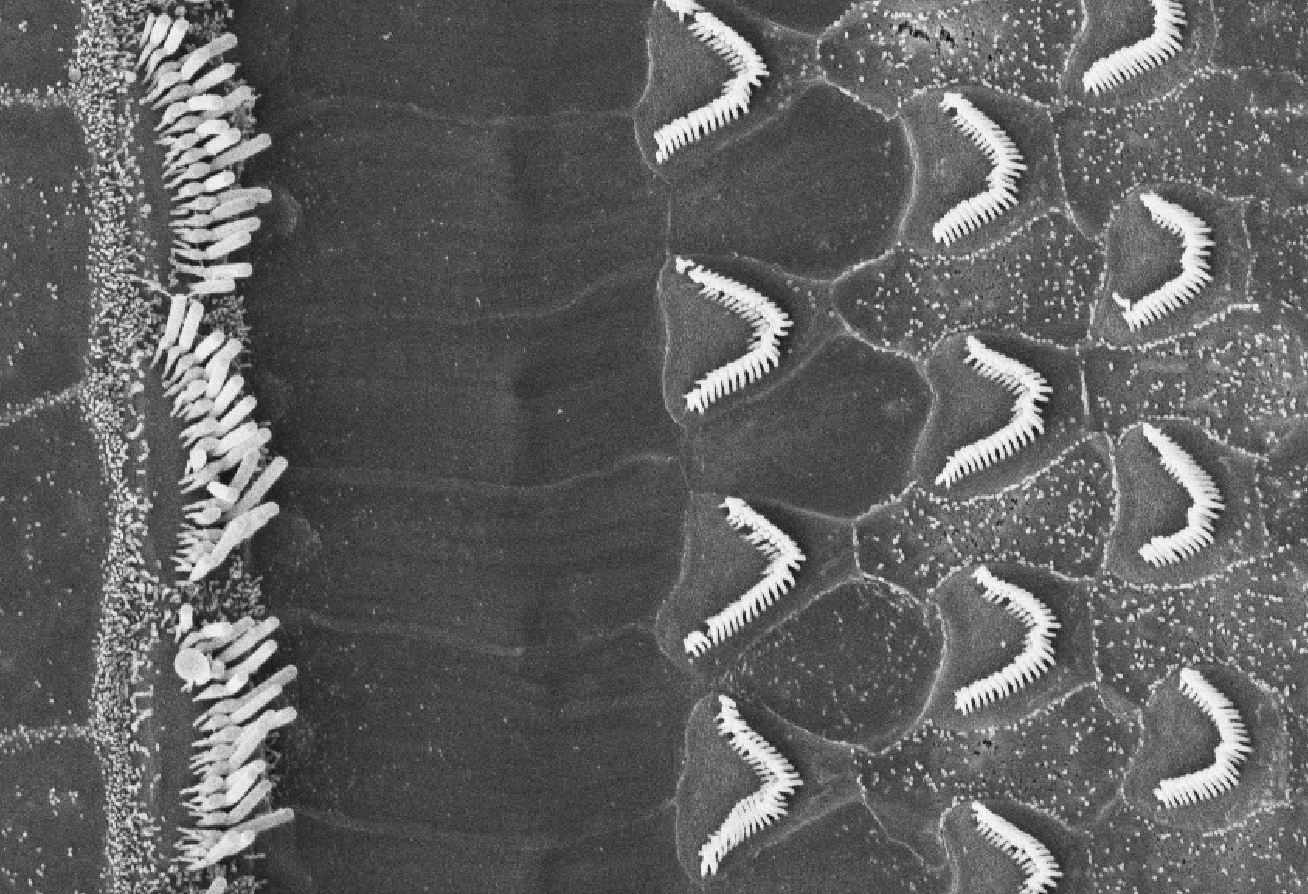 Scanning electron microscope image of the hair bundles of inner and outer hair cells from the mouse cochlea. The white filaments are the individual hairs of the bundles, which are connected by tip links.

Newswise — Baltimore, MD – The inner ear cells are exquisitely arranged to transmit sound to the brain, but just slight defects in these patterns can lead to deafness. Over 100 mutations in proteins involved in this intricate system have been associated with hearing loss. Tobias Bartsch, a postdoctoral associate in A. J. Hudspeth’s lab, and colleagues at Rockefeller University reveal how one of these proteins acts as a molecular spring that helps convert sound waves into an electrical signal that the brain can recognize. They will present their research at the 63rd Biophysical Society Annual Meeting, to be held March 2 - 6, 2019 in Baltimore, Maryland.

Deep inside the fluid-filled chamber of our ears are specialized cells, each with a brush of hairs on top arranged in a staircase-like pattern. At the tip of each individual hair there are tip links that connect the tip of one hair to the side of a taller hair next to it. When a sound wave moves the liquid inside the ear, the hair bundles bend and the tension in these links changes, which opens ion channels—that’s the onset of signaling to the brain. Bartsch’s and colleagues’ new work reveals the identity and mechanism of a finely-tuned spring they believe is responsible for converting the deflection of hair cells into a force capable of opening ion channels.

“Previous attempts to identify the protein responsible for stretching the ion channels open ignored the fact that this protein lives in a warm and wet fluid: the endolymph. The temperature and the aqueous environment can influence protein properties,” Bartsch explained. They decided to look at protocadherin 15, a tip link protein that is involved in ion channel opening, but had previously been deemed “too stiff” for the job of acting as a molecular spring. “If a spring is too soft it won’t generate enough force to open the ion channels and signal to the brain, but if the spring is too stiff, small and large stimuli both generate forces large enough to open all channels, which means that you cannot differentiate between small and large sound amplitudes.” You need a reasonably soft spring in order to get gradual changes in the ion channels to interpret a range of noises,” Bartsch said. They built a system to measure the response of protocadherin 15 to tiny forces, the same as those they would experience inside the ear, in a warm and wet chamber.

They found that conditions mimicking the inner ear created thermal bends in protocadherin 15. “The moment there were thermal bends, protocadherin 15 became a soft spring at low tension, and as we increased the tension it became stiffer and resisted that force,” Bartsch said. Those changes likely allow it to be sensitive to the range of volumes that we can hear. Intriguingly, at extremely high tensions protocadherin 15 unraveled, which might serve to protect the structure of the hair cells during loud sounds.

The Biophysical Society, founded in 1958, is a professional, scientific Society established to encourage development and dissemination of knowledge in biophysics. The Society promotes growth in this expanding field through its annual meeting, monthly journal, and committee and outreach activities. Its 9,000 members are located throughout the U.S. and the world, where they teach and conduct research in colleges, universities, laboratories and government agencies. www.biophysics.org.