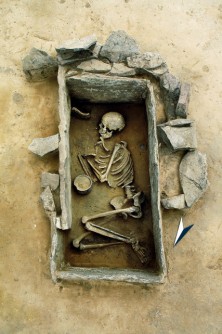 A burial site of a neolithic culture found near Saxony-Anhalt, Germany. A rapidly growing supply of DNA from ancient skeletons is changing evolutionary history.

A study published in the journal, Nature, adds to growing evidence that the people of Europe’s DNA underwent widespread changes, altering their height, digestion, immune system and skin color with the spread of agriculture. Before the rise of agriculture, Europe was home to a population of hunter-gatherers. Then a wave of people arrived whose DNA resembles that of people in the Near East. It’s likely that they brought agriculture with them.