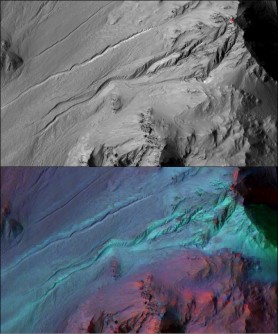 The highly incised gullies on the eastern rim of the 150 km × 125 km Hale crater (located at 35.7°S, 323.4°E) as seen in the HiRISE image (top) resemble gullies on Earth and appear to have been carved by liquid water. However, when the gullies are observed with the addition of mineralogical information from CRISM (bottom), unaltered mafic material (light blue) from the crater rim is carved and transported downslope along the gully channels. No hydrated minerals are observed within the gullies in the CRISM image, indicating limited to no interaction of the mafic material with liquid water. These findings suggest that a different mechanism that does not involve liquid water may be responsible for carving these gullies on Mars. The top image is a HiRISE image (HiRISE PSP_002932_1445), and the bottom image is the same HiRISE image with a CRISM mineral map (CRISM FRT00004AF7) overlaid on top.

Newswise — New findings using data from NASA’s Mars Reconnaissance Orbiter (MRO) show that gullies on modern Mars are most likely not being formed by flowing liquid water. This new evidence will allow researchers to further narrow theories as to the mechanisms behind the formation of gullies on Mars, and help reveal more details about Mars’ recent geologic processes.

Scientists have used the term “gully” for features on Mars that share three characteristics in their shape: an alcove at the top, a channel, and an apron of deposited material at the bottom. Gullies are distinct from another type of feature on Martian slopes, streaks called “recurring slope lineae” or RSL, which are distinguished by seasonal darkening and fading, rather than characteristics of how the ground is shaped. Water in the form of hydrated salt has been identified at RSL sites. The new study focuses on gullies and their formation process by adding composition information to previously acquired imaging.

Researchers from the Johns Hopkins University Applied Physics Laboratory (APL) in Laurel, Maryland, examined high-resolution compositional data from more than 100 gully sites throughout Mars. These data, collected by the Compact Reconnaissance Imaging Spectrometer for Mars (CRISM) onboard MRO, were then correlated with images from the spacecraft’s High Resolution Imaging Science Experiment (HiRISE), as well as from the MRO Context Camera (CTX).

The findings showed no mineralogical evidence for abundant liquid water or its by-products, thus pointing to mechanisms — such as the freeze and thaw of carbon dioxide frost — other than the flow of water as being the major driver of recent gully evolution.

The findings were published in Geophysical Research Letters.

Gullies are a widespread and common feature on the Martian surface, mostly occurring between 30 and 50 degrees latitude in both the northern and southern hemispheres, generally on slopes that face toward the poles. On Earth, similar gullies are formed by flowing liquid water; however, under current conditions, liquid water is transient on the surface of Mars, and may occur only as small amounts of brine even at RSL streaks. The lack of sufficient water to carve gullies has resulted in a variety of theories for the gullies’ creation, including different mechanisms involving evaporation of water and carbon dioxide frost.

“The HiRISE team and others had shown there was seasonal activity in gullies — primarily in the southern hemisphere — over the past couple of years, and carbon dioxide frost is the main mechanism they suspected of causing it. However, other researchers favored liquid water as the main mechanism,” said Jorge Núñez of APL, the lead author of the paper. “What HiRISE and other imagers were not able to determine on their own was the composition of the material in gullies, because they are optical cameras. To bring another important piece in to help solve the puzzle, we used CRISM, an imaging spectrometer, to look at what kinds of minerals were present in the gullies and see if they could shed light on the main mechanism responsible.”

Núñez and the other authors took advantage of a new CRISM data product developed by the CRISM team called Map-projected Targeted Reduced Data Records (MTRDR), which allowed them to more easily perform their analyses and then correlate the findings with HiRISE imagery.

“On Earth and on Mars, we know that the presence of phyllosilicates — clays — or other hydrated minerals indicates formation in liquid water,” Núñez said. “In our study, we found no evidence for clays or other hydrated minerals in most of the gullies we studied, and when we did see them, they were erosional debris from ancient rocks, exposed and transported downslope, rather than altered in more recent flowing water. These gullies are carving into the terrain and exposing clays that likely formed billions of years ago when liquid water was more stable on the Martian surface.”

The lack of hydrated minerals such as clays, carbonates, sulfates or salts in the gully channels and aprons strongly suggests that another mechanism besides liquid water is responsible for the formation of Martian gullies. Other researchers have created computer models that show how sublimation of seasonal carbon dioxide frost can create gullies similar to those observed by MRO, and how their shape can mimic the types of gullies that liquid water would create. Núñez said that this new research suggests those models may be correct.

“Our findings don’t rule out the possibility that liquid water may contribute to the formation to some gully systems, since liquid water may be responsible for RSL, which are completely distinct from gullies. But we did not find any mineralogical evidence of deposition or alteration where liquid water was the primary mechanism,” Núñez said. “What we’ve found helps us get a better picture of how these interesting features on the surface of Mars can form and change, and that in turn gives us better insights into the recent geologic history of the planet.”

APL built and operates CRISM, one of six instruments on MRO. JPL, a division of the California Institute of Technology in Pasadena, manages the MRO project and the Mars Exploration Program for the NASA Science Mission Directorate in Washington. For more about CRISM, see http://crism.jhuapl.edu. For more about the Mars Reconnaissance Orbiter, visit http://www.nasa.gov/mro.