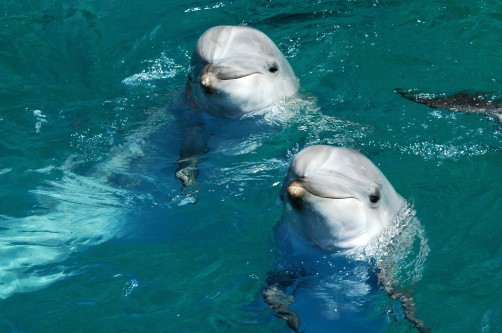 For humans, there are hundreds of antibodies available on the market today to evaluate immune status in health and diseases. However, for the more than 42 known species of dolphins around the world, commercially available marine-specific antibodies do not exist.

Newswise — For humans, there are hundreds of antibodies available on the market today to evaluate immune status in health and diseases. However, for the more than 42 known species of dolphins around the world, commercially available marine-specific antibodies do not exist. With the drastic increase in the number of unusual dolphin strandings and deaths along the southeastern coast of the United States and elsewhere, finding specific antibodies to test, monitor and document their immune health is critical.

Researchers from Florida Atlantic University’s Charles E. Schmidt College of Medicine in collaboration with Georgia Aquarium, conducted a study to identify cross-reactive terrestrial-specific antibodies for dolphins, which is the first study to characterize their immune cell subsets using this methodology. The goal of this study was to assess changes in immune cell populations in dolphins in the wild and results are published in the journal BMC Veterinary Research.

“We know that a strong immune system is important for combatting infectious diseases and cancer in both humans and animals,” said Mahyar Nouri-Shirazi, DVM., Ph.D., lead author of the study and a professor of integrated medical science in FAU’s College of Medicine. “Wild dolphins are impacted by newly characterized infectious disease and cancer, often associated with immunologic disturbances, which are now being better characterized.”

While there are a number of studies and reports that suggest a correlation between environmental contaminants, immune disturbances and disease susceptibility in wild dolphins and other marine mammals, scientists and veterinarians need a way to characterize, monitor and evaluate specific immune cells to investigate and confirm this correlation.

The gold standard to monitor immune status and disease progression in humans is flow cytometry, a powerful tool that is used to rapidly measure and isolate immune cells. However, flow cytometry for dolphins requires the use of dolphin specific antibodies that are presently limited for the many different types of immune cells. To address this limitation, Nouri-Shirazi’s team identified cross-reactive, terrestrial-specific antibodies to phenotype the immune cells of dolphins under human care and compare them with the immune status of Atlantic bottlenose dolphins in the wild.

“When we compared the samples, we were able to see that the profile of some of the dolphins in the wild had changed significantly,” said Nouri-Shirazi. “We saw abnormal distributions and increases in the percentages of the immune cells, which indirectly tells us that there may be a disease present.”

Results from this study show that out of 65 terrestrial-specific antibodies tested, 11 were cross-reactive and identified dolphin immune cell populations within their peripheral blood. Using these antibodies, the researchers found significant differences in the absolute number of cells expressing specific markers within their lymphocyte and monocyte fractions. They found that the cross-reactive antibodies not only identified specific changes in the immune cells of dolphins in the wild, but also opened up the possibility to investigate the causal relationship between immune disturbances and morbidity and mortality seen in these dolphins in the wild.

“Georgia Aquarium’s collaborative bottlenose dolphin research with FAU has demonstrated the intricate and dynamic interactions that occur between infectious disease, anthropogenic contaminants and immunologic responses. We have found that these interactions highlight the complexity of evaluating health in dolphins,” said Gregory Bossart, VMD, Ph.D., co-author of the study and senior vice president and chief veterinary officer, Georgia Aquarium. “Additionally, we have demonstrated that the bottlenose dolphin is a valuable sentinel species for understanding emerging or re-emerging diseases that may impact environmental and human health.”

Findings from this study open up the possibility of utilizing flow cytometry for routine health assessment by monitoring specific changes in immune cells of wild dolphins caused by environmental contaminants or infectious agents with the goal of understanding pathogenesis of diseases.

The researchers anticipate that this new approach could be applicable to dolphins as well as other marine mammals including whales and manatees.

This research was sponsored by Georgia Aquarium’s Research and Conservation Program.

FAU’s Charles E. Schmidt College of Medicine is one of 147 accredited medical schools in the U.S. The college was launched in 2010, when the Florida Board of Governors made a landmark decision authorizing FAU to award the M.D. degree. After receiving approval from the Florida legislature and the governor, it became the 134th allopathic medical school in North America. With more than 70 full and part-time faculty and more than 1,300 affiliate faculty, the college matriculates 64 medical students each year and has been nationally recognized for its innovative curriculum. To further FAU’s commitment to increase much needed medical residency positions in Palm Beach County and to ensure that the region will continue to have an adequate and well-trained physician workforce, the FAU Charles E. Schmidt College of Medicine Consortium for Graduate Medical Education (GME) was formed in fall 2011 with five leading hospitals in Palm Beach County. In June 2014, FAU’s College of Medicine welcomed its inaugural class of 36 residents in its first University-sponsored residency in internal medicine.

About Georgia Aquarium: Georgia Aquarium is a leading 501(c)(3) non-profit organization located in Atlanta, Ga. that is Humane Certified by American Humane and accredited by the Alliance of Marine Mammal Parks and Aquariums and the Association of Zoos and Aquariums. Georgia Aquarium is committed to working on behalf of all marine life through education, preservation, exceptional animal care, and research across the globe. Georgia Aquarium continues its mission each day to inspire, educate, and entertain its millions of guests about the aquatic biodiversity throughout the world through its hundreds of exhibits and tens of thousands of animals across its seven major galleries. For more information, visit georgiaaquarium.org.