Artificial Intelligence Thinks Like People with Autism; Being Used to Develop Educational Tools 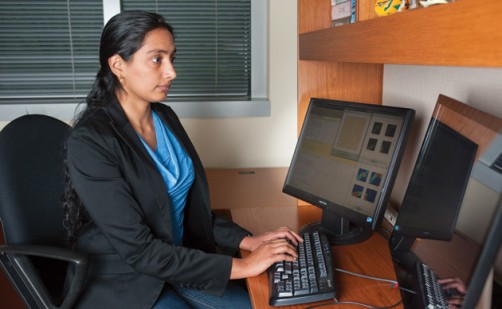 Newswise — There’s a computer on the third floor of Vanderbilt’s Featheringill Hall that scans geometric patterns, deciding which missing shapes would be most likely to fit in.

It fills in those blanks about as well as a human 17-year-old would, and it’s only getting smarter, thanks to a study of the way certain people on the autism spectrum see the world.

Inspired by the writings of perhaps the most famous person on the spectrum, Temple Grandin, Assistant Professor of Computer Science Maithilee Kunda figured out how to write code that emulates the kinds of image-based thinking that Grandin used to design complicated farm equipment. The result is a form of artificial intelligence that allows researchers to study a model of human cognition, determine how it problem-solves and then tweak it to perform better.

Kunda discusses the technology and shows it on screen in a video here: https://youtu.be/BY3ETBvvQBo.

“Most of us think in a combination of lots of different things. We think in words, we think in pictures, we think in smells and feelings,” Kunda said. “What we see in some people with autism is that they’re very much on the visual side. Temple Grandin talks about how she thinks really strongly with images, and certain kinds of language-based thinking are a little more difficult for her.”

She works with a neuropsychologist who studies visual cognition in autism. At Vanderbilt, computer science students in Kunda’s lab are working to turn that system of thinking into code. The lab’s computers are programmed to solve many different types of human cognitive tests, such as the Raven’s Progressive Matrices, an intelligence test developed in 1936 that asks subjects to look at a series of patterns and determine what the missing one would be.

The benefits to this research run both ways, Kunda points out. AI is improved by looking at intelligence that isn’t neurotypical. It can draw from a richness of variety in human intelligence, making it more creative and effective. At the same time, researchers are using artificial intelligence to develop educational tools specifically for people with autism.

“One of the big mysteries we have right now is there is so much variability among different people on the spectrum and how they think,” Kunda said. “By trying to pin down these visual reasoning processes more carefully, we’re hoping we can start to divide up that spectrum into people who reason in particular ways and support them more effectively.”